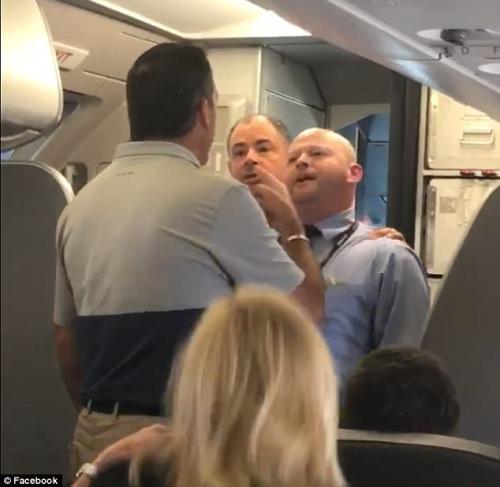 For U.S. airline public relations teams, April has been the cruelest month on record.

Less than two weeks after a 69-year-old doctor, David Dao, was hospitalized after Chicago aviation police dragged him from a United Airlines plane sparking international outrage and a public relations nightmare for the carrier, it is now American Airlines’ turn to be in the spotlight after the airline suspended a male flight attendant when a video emerged showing him challenging a passenger to a fight after allegedly hitting a woman with a stroller during boarding.

The video filmed before Flight 591 departed from San Francisco on Friday afternoon, shows the airline staff member goading a passenger and saying, ‘hit me’.

Facebook user Surain Adyanthaya who recorded the incident, said he started filming after the flight attendant “violently took a stroller from a lady with her baby on my flight, hitting her and just missing the baby.” He added that “they just involuntarily escorted the mother and her kids off the flight and let the flight attendant back on, who tried to fight other passengers. The mom asked for an apology and the AA official declined.”

In his video, the woman with the child can be heard asking flight attendants for the stroller. A male passenger then walks towards the front of the plane and demands from the airline crew the name of the employee who took the stroller before he returns to his seat. Moments later, another American employee, who Scott said was a flight attendant, enters the plane and the male passenger confronts him.

“You do that to me and I’ll knock you flat,” the passenger can be heard saying to the flight attendant.

The staff member responds by pointing his finger at the man and telling him to ‘stay out of it.’ The male passenger then steps closer to the employee, who challenges him to a fight. 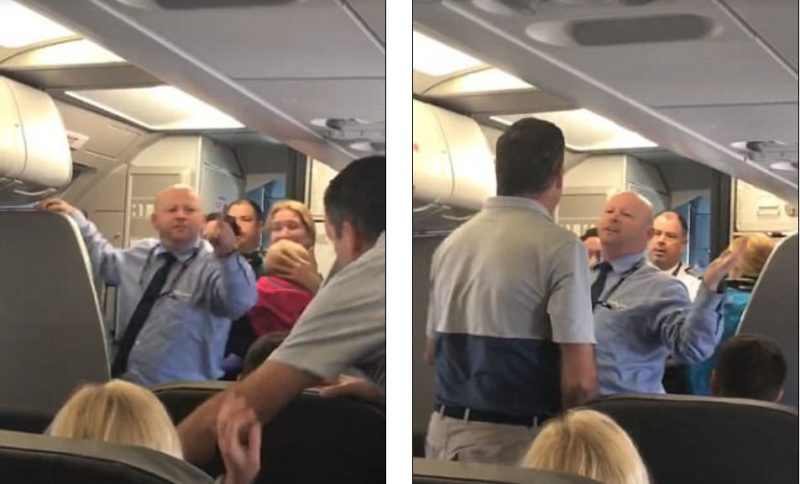 ‘Try it,’ the employee tells the customer. ‘Hit me. You don’t know what the story is.’ ‘You almost hurt a baby!’ the man is heard replying. The passenger eventually returns to his seat and the flight attendant leaves the plane.

Adyanthaya posted another photo on his Facebook page showing the woman with two young children – believed to be twins – in her arms; she was reportedly removed from the plane and the AA employee was permitted back on the plane. 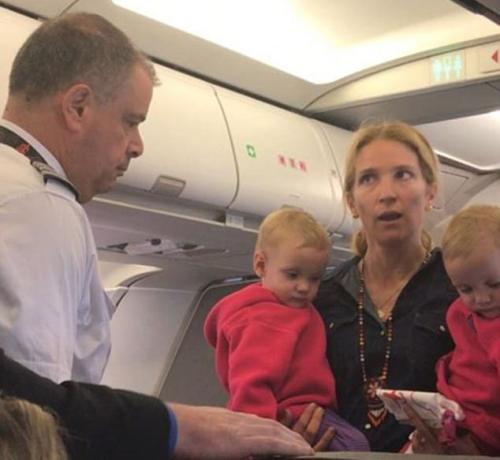 Reuters adds that American Airlines was investigating Friday’s incident, which happened on Flight 591 from San Francisco to Dallas before the plane took off, Leslie Scott, an airline spokeswoman said. The incident started over a dispute as to whether the woman could bring her stroller on the flight, Scott said. Witnesses said the male flight attendant told the woman she could not keep the stroller at her seat in the rear of the plane, Tribune Media reported. They said she was trying to find space for it when the initial incident occurred.

Understandably, American scrambled to intercept this latest PR fiasco before it got out of hand, although it may be too late.

“We are deeply sorry for the pain we have caused this passenger and her family and to any other customers affected by the incident,” the airline said in a statement late on Friday. The woman and her family were being upgraded to first class for the remainder of their international trip, it said. It is doubtful whether this attempt to mollify the general public, angrier by the day at being treated like cattle by US airlines (except for first class of course), will succeed.