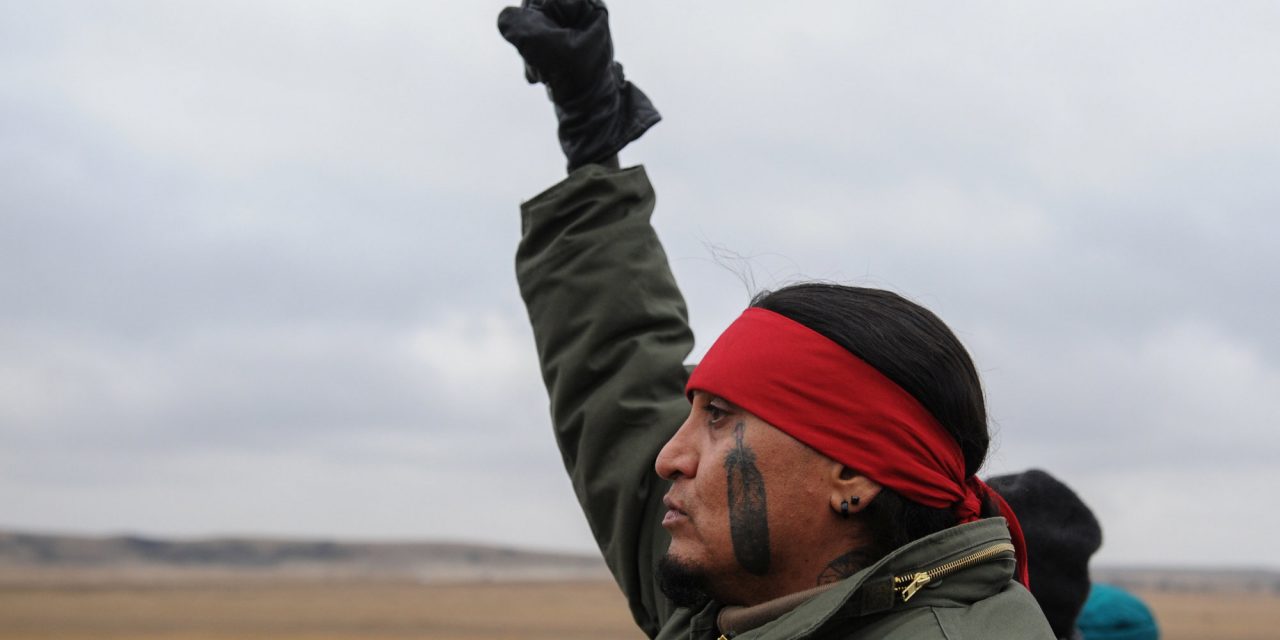 Protesters participate in a prayer circle on Turtle Island on Thanksgiving day during a protest against plans to pass the Dakota Access pipeline near the Standing Rock Indian Reservation, near Cannon Ball, North Dakota, U.S. November 24, 2016. © Stephanie Keith / Reuters

The US Army Corps of Engineers announced it will close the portion of federal land on which water protectors are camping in North Dakota by December 5, to protect the public amid violent confrontations between protesters and law enforcement.

The Army Corps of Engineers said it is “closing the portion of the Corps-managed federal property north of the Cannonball River to all public use and access effective December 5, 2016,” according to a statement tweeted by the Young Turks’ Jordan Chariton.

“This decision is necessary to protect the general public from the violent confrontation between protestors and law enforcement officials that have occurred in this area, and to prevent death, illness, or serious injury to inhabitants of encampments due to the harsh North Dakota winter conditions.”

The notice said the Corps of Engineers had established “a free speech zone on land south of the Cannoball River for anyone wished to peaceably protest the Dakota Access pipeline project.”

The notice said anyone found on the Corps’ land north of the Cannonball River after December 5 “will be considered trespassing and may be subject to prosecution under federal, state, and local laws.”  It also said anyone staying on the lands would do so “at their own risk, and assume any and all corresponding liabilities for their unlawful presence and occupations of such lands.”

The notice comes a week after 26 people were injured and taken to hospital during classes at the pipeline site last Sunday and more than 200 were reportedly treated for hypothermia after Morton County Sheriff’s Department deployed water cannon in below-freezing temperatures.

Since the Spring, protesters have been standing in opposition the $3.7 billion Dakota Access Pipeline by setting up camps and blocking roads in North Dakota to block the completion of the pipeline.

“We are aware of the information about the woman on social media who has claimed she sustained injuries to her arm due to law enforcement tactics. The injuries sustained are inconsistent with any resources utilized by law enforcement and are not a direct result of any tools or weapons used by law enforcement,” according to North Dakota Highway Patrol Lieutenant Tom Iverson. “This incident remains under investigation by the North Dakota BCI and ATF. Additional details will be released as the investigation progresses.”

Another woman, Vanessa Dundon, an Apache woman, was injured during the confrontation on November 20 at the Backwater Bridge when she was shot in the eye with a tear gas canister by the Sheriff’s  Department. She suffered a detached retina and needs surgery to ensure her vision according to a GoFundMe appeal set up for her medical fund.

The Army Corps of Engineers decision to declare some land off limits to the Standing Rock Sioux Tribe is the latest move in centuries of treaty violations, according to the Standing Rock Sioux.For over 150 years the federal government has taken land from Lakota and Dakota people according to tribal leaders, beginning with the seizure of land in the Black Hills of South Dakota after the discovery of gold in the 1870s “to the construction of dams in the Missouri River that flooded villages, timber land and farmland in the Dakotas in the 1950s.”

“This government honors international treaties like they are the Holy Grail, but within our own homeland they find a way to break,” Standing Rock Sioux Chairman David Archambault told the Denver Post. Under the treaties and American law, Archambault is the head of a domestic sovereign nation.

“The best way to protect people during the winter, and reduce the risk of conflict between water protectors and militarized police, is to deny the easement for the Oahe crossing, and deny it now,” Archambault said in a Friday statement. “We ask that everyone who can appeal to President Obama and the Army Corps of Engineers to consider the future of our people and rescind all permits, and deny the easement to cross the Missouri River just north of our Reservation and straight through our treaty lands. When the Dakota Access Pipeline chose this route, they did not consider our strong opposition. Our concerns were clearly articulated directly to them in a tribal council meeting held on Sept. 30, 2014, where DAPL and the ND Public Service Commission came to us with this route.”

This work is licensed under a Creative Commons Attribution-Share Alike 3.0 License