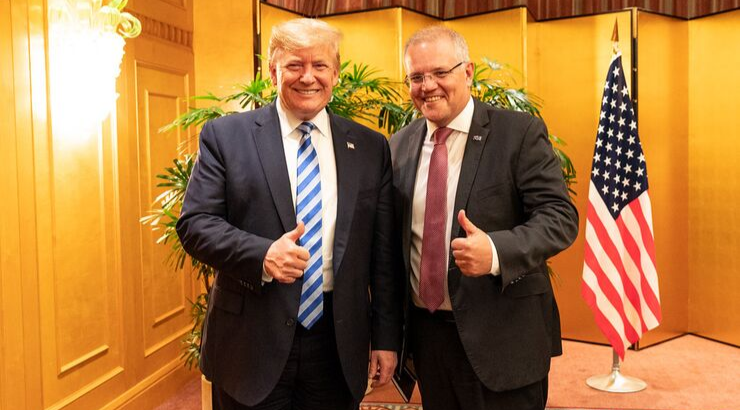 Update (1740ET): Less than an hour after the New York Times dropped their ‘bombshell’ whistleblower claims that President Trump coerced the Australian PM into assisting his investigation into the origins of the Mueller probe, the Aussie PM’s office has destroyed the narrative in two short sentences. An official statement confirmed:

“The Australian Government has always been ready to assist and cooperate with efforts that help shed further light on the matters under investigation. The PM confirmed this readiness once again in conversation with the President”

So, the Aussies were always ready and willing to help (with no Trump coercion required) and the Aussies reiterated such facts (with no apparent prodding from Trump).

As we enter a new era of anonymous whistleblowers heading into the 2020 election (a new anti-Trump strategy telegraphed by former CIA Director, John Brennan), the New York Times is out with a report that President Trump asked the Australian Prime Minister to help Attorney General William Barr uncover the origins of “Russiagate,” according to yet another ‘whistleblower.’

A transcript of the call has been restricted to a small group of the president’s aides, according to the Times, which compared it to the “unusual decision” similar to how the Trump administration restricted access to the transcript of a July call with the President of Ukraine (which the last administration routinely did according to former national security adviser Susan Rice).

According to the Times, Trump was “using high-level diplomacy to advance his personal political interests,” however “Justice Department officials have said that it would be neither illegal nor untoward for Mr. Trump to ask world leaders to cooperate with Mr. Barr.”

President Trump initiated the discussion in recent weeks with Mr. Morrison explicitly for the purpose of requesting Australia’s help in the Justice Department review of the Russia investigation, according to the two people with knowledge of the discussion. Mr. Barr requested that Mr. Trump speak to Mr. Morrison, one of the people said. –NYT

Of note, Barr appointed career prosecutor John H. Durham to investigate the origins of “Russiagate,” a move which Trump and his allies have suggested may be potentially helpful for the White House.

Trump’s request effectively meant that Australia would be investigating itself over the participation of Australian diplomat Alexander Downer in an alleged spying – and potential setup – on the Trump campaign.

Shortly after Trump aide George Papadopoulos announced his intention to work for the 2016 campaign, he was lured to London in March of 2016, where Maltese professor and self-described Clinton foundation member Joseph Mifsud fed him the rumor that Russia had damaging information on Hillary Clinton.

We have now pinned Peter Strzok’s boss, Bill Priestap, in London the week of May 6th, 2016 and on the 9th. The day before Alexander Downer was sent to spy on me and record our meeting. Congress must release the transcripts and embarrass the deep state.

Papadopoulos would later relay this information to Downer, who passed it to the FBI, which in turn launched Operation Crossfire Hurricane – the FBI’s official investigation into the Trump campaign.

The F.B.I.’s counterintelligence investigation into Russian interference in the 2016 election began after Australian officials told the bureau that the Russian government had made overtures to the Trump campaign about releasing political damaging information about Hillary Clinton.

Australian officials shared that information after its top official in Britain met in London in May 2016 with George Papadopoulos, a Trump campaign foreign policy adviser who told the Australian about the Russian dirt on Mrs. Clinton.

Mr. Papadopoulos also said that he had heard that the Russians had “thousands” of Mrs. Clinton’s emails from Joseph Mifsud, an academic. Mr. Mifsud, who was last seen working as a visiting professor in Rome, has disappeared. –NYT

Barr began a review of the Russia investigation earlier this year with the stated goal of determining whether the US intelligence community under Obama acted inappropriately – for example, when they sent Stefan Halper – a spy who had been paid over $1 million during Obama’s presidency – to infiltrate Trump campaign aides Papadopoulos and Carter Page.

Last week the DOJ announced that it was exploring how other countries, including Ukraine, “played a role in the counterintelligence investigation directed at the Trump campaign.”

Whatever the findings, we’re sure the new ‘whistleblower strategy’ is sure to deflect from any actual wrongdoing which may have been committed by government officials.

The NY Times, & their Democrat Party allies, are desperate to cover up the Obama administration’s collusion with Ukrainian, UK, and Australian officials, & the spying operation against Trump. This is all media noise to distract you from the biggest political scandal in history. pic.twitter.com/Subhelyric