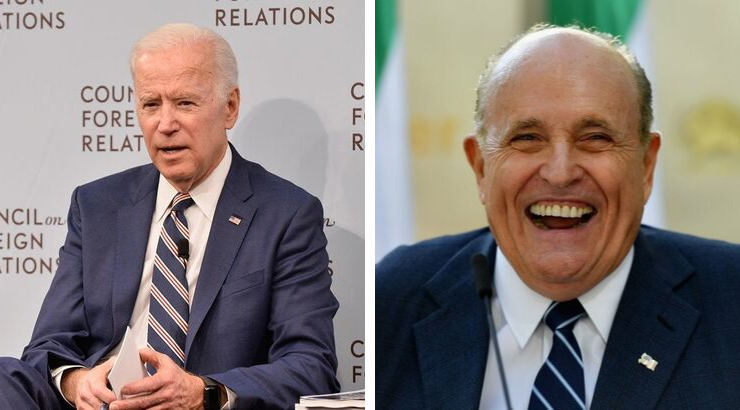 The feud between “Middle Class” Joe and “Mayor” Rudy is getting intensely personal.

Joseph Biden’s presidential campaign reached out to top television anchors and networks on Sunday to “demand” they stop booking Trump’s personal lawyer, Rudy Giuliani, because of what it called misleading comments and “debunked conspiracy theories” about the Biden family and Ukraine.

“We are writing today with grave concern that you continue to book Rudy Giuliani on your air to spread false, debunked conspiracy theories on behalf of Donald Trump,” top Biden campaign advisers, Anita Dunn and Kate Bedingfield, wrote in the letter.

The note was sent to executives and top political anchors at ABC, CBS, CNN, Fox News and NBC, including interviewers like Jake Tapper, Chuck Todd and Chris Wallace. In it, the Biden campaign argues that Giuliani’s appearances on television allow him to mislead the viewing public.

“We write to demand that in service to the facts, you no longer book Rudy Giuliani, a surrogate for Donald Trump who has demonstrated that he will knowingly and willingly lie in order to advance his own narrative,” the letter continued. “Giving Rudy Giuliani valuable time on your air to push these lies in the first place is a disservice to your audience and a disservice to journalism,” the advisers wrote.

“Giuliani is not a public official, and holds no public office that would entitle him to opine on the nation’s airwaves,” the Biden campaign wrote. “The decision to legitimize his increasingly outlandish and unhinged charges and behavior — calling it ‘news’ — rests solely with you.”

The letter, as Bloomberg noted, marked an escalation from Biden’s campaign. The former vice president, at a news conference in Delaware on Tuesday, dismissed allegations of about wrongdoing in Ukraine as a “smear.”

The full letter is below: 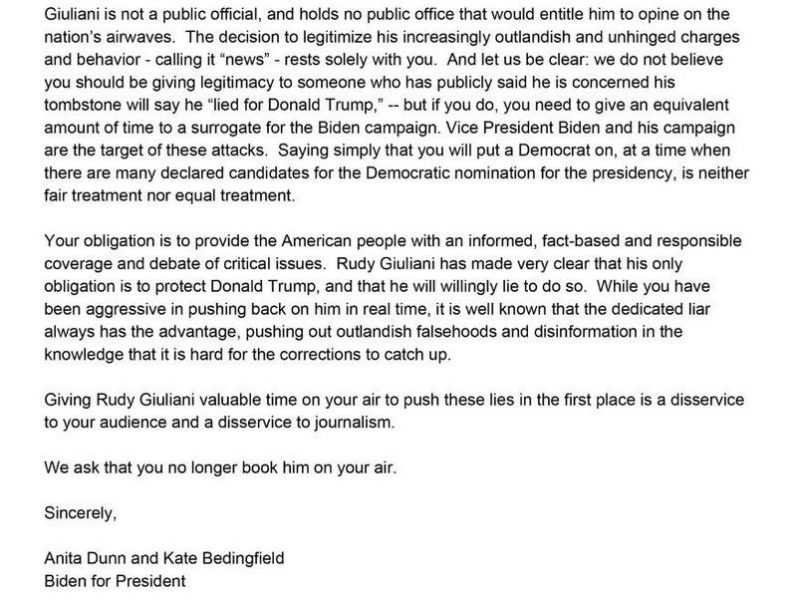 Dunn and Bedingfield said comments made by Giuliani about the work the former vice president’s son, Hunter Biden, and suggestions that Biden had improperly intervened in the affairs of Ukraine to protect his son, were “baseless.”

Giuliani, whose name featured in the letter by the infamous CIA whistleblower, made public last week and which confirmed that it was merely a collection of third party speculation and hearsay with virtually no actual first-person observations, has been a ubiquitous presence on television news in recent days, including several appearances on Sunday. Advocating on Trump’s behalf, Giuliani has repeatedly alleged that Biden, while serving as vice president, intervened in Ukraine to assist his son Hunter Biden’s business interests. While no evidence has surfaced that Mr. Biden intentionally tried to help his son in Ukraine, Biden has been recorded on tape admitting he would withhold $1 billion in aid for Ukraine under the Obama admin, unless the prosecutor tasked with probing his son was fired.

MUST WATCH: Here's Joe Biden in 2018 bragging about using his power to hold up $1 BILLION in U.S. loans unless Ukraine fired the prosecutor investigating Burisma – a corrupt Ukrainian oil company paying his son $50,000 a month.

Biden needs to explain his conflict of interest! pic.twitter.com/bDhaKjFNZN

It was unclear why Biden was taking an approach seeking to silence Rudy – the former vice president could slap him with a libel or slander lawsuit if Giuliani is distorting the truth, or he could simply appear on networks to defend himself, prompting some to ask what is “Biden so afraid of.”

What is Joe Biden so afraid of? https://t.co/QdfCHebbDI

Incidentally, as the Daily Wire’s Ryan Saavedra also points out, the flipside to Giuliani’s complaint is that since Biden’s campaign put the demand in writing “it all but guaranteed that the networks would have to invite Guiliani on because if the letters ever got out the networks would be accused of colluding with the Democrats.”

Indeed, as Trump’s personal lawyer, however, Mr. Giuliani remains a highly newsworthy figure and a coveted booking for television journalists covering the burgeoning impeachment inquiry, which centers on Mr. Trump’s attempts to seek information on Mr. Biden’s dealings in Ukraine.

Meanwhile, as the Democrat impeachment juggernaut rolls on, questions about the Bidens’ role in Ukraine continue to grow, despite the less than impartial media’s attempts to squash any potential investigation into the role Obama’s vice president played in the corrupt former Soviet nation.

Facts:
Hunter Biden’s investment firm partners at the time former secretary of state John F. Kerry’s stepson believed that joining the board of Burisma Holdings was a bad idea and ended his business relationship with Biden … https://t.co/mUjMEYnNJd

Then, just after 6pm, Rudy Giuliani tweeted his response:”The Bidens are clearly rattled by the affidavit showing there is a named accuser and not an anonymous source, who is ready to testify! Reminds me of the reaction to the corrupt pols of the 70’s and 80’s. They have their Dem media trying to destroy my reputation and silence me!”

The Bidens are clearly rattled by the affidavit showing there is a named accuser and not an anonymous source, who is ready to testify! Reminds me of the reaction to the corrupt pols of the 70’s and 80’s. They have their Dem media trying to destroy my reputation and silence me! pic.twitter.com/xQ2isIPzos

This was followed by another tweet in which Giuliani said that “Think of the Biden arrogance and entitlement to  protection. They believe they own the media and they are demanding that they silence me. They know I have incriminating facts, not hearsay, because they know what they did in selling Joe’s office to a Ukrainian crook.”

Whatever happens next, it is safe to say that the feud between the Bidens and the man who took down New York’s crime families is only just starting.