Bin Laden Warned That “Biden Will Lead U.S. Into Crisis” in Creepy Letter From 2010

During what has been the most embarrassing stretch of the Biden presidency, a letter taken from the massive cache of documents retrieved by American Navy SEALs from Osama bin Laden’s compound has leaked to the New York Post…and what it says might offer some insight into the Taliban’s PR strategy as they re-assume control of Afghanistan after 20 years.

The letter reveals that Osama bin Laden thought so little of Biden’s capabilities as a leader that he ordered Al Qaeda specifically not to target Biden for assassination, asking instead that they focus on President Obama, or Gen. David Petraeus (then still in control of the mission in Afghanistan). The letter is dated from May 2010.

In the letter dated May 2010, the al Qaeda 9/11 mastermind wrote he had no assassination plots against Biden because he deemed him “totally unprepared” to lead the United States.

Instead, bin Laden urged his followers to be on the lookout for then-President Obama.

He told them there was a high priority to target aircrafts belonging to Obama and then-CIA director David Petraeus.

“They are not to target visits by US Vice President Biden. The groups will remain on the lookout for Obama or Petraeus,” bin Laden wrote.

Bin Laden reasoned that having Biden ascend to the presidency would be a net benefit for Al Qaeda.

“The reason for concentrating on them is that Obama is the head of infidelity and killing him automatically will make Biden take over the presidency for the remainder of the term, as it is the norm over there.”

“Biden is totally unprepared for that post, which will lead the US into a crisis.”

“As for Petraeus, he is the man of the house in this last year of the war, and killing him would alter the war’s path.”

An excerpt from the documents can be seen below: 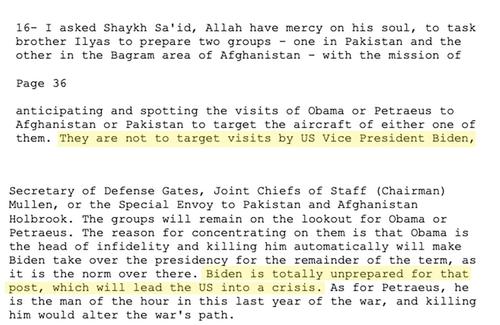 Bin Laden’s musings about Biden’s ineptitude (remember, Biden’s history of public gaffes started long before the 2020 campaign) aren’t the only criticisms of Biden that have resurfaced in recent days. On TikTok, a new generation of Americans is getting acquainted with Biden’s long history of gaffe-making via this clip from the late, great Robin Williams, who skewers the then-vice president in this bit.

The thirty second bit begins: “Joe is like your uncle who’s got a new drug and hasn’t got the dosage right… ‘I’m proud to work with Barack America’ – he’s not a superhero you idiot come here! ‘When FDR was on television…’ – there was no TV back then come here Joe, sit down!”

As the NYPost points out, more documents taken from the Bin Laden cache are available here.

Clearly, the Taliban share Bin Laden’s dim view of Biden. Why else do you think they’re investing so much effort in their PR “rebranding” – is it because they know Biden will fall for it, hook line and sinker?