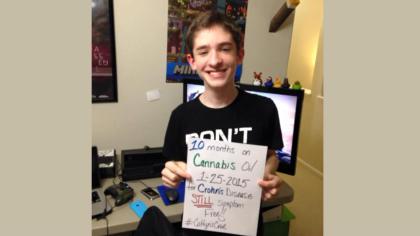 DENVER (CBS4) – There is new research on the use of marijuana as medicine in Colorado and a Marijuana and Health Symposium at National Jewish Health on Saturday explored nearly a dozen studies looking at using pot for things like seizures and insomnia.

Four times a day Coltyn takes his medicine. It’s cannabis oil used to treat his Crohn’s disease, an illness he’s been fighting since age 11, and up until last year it looked like a battle he was losing.

“I was just on every pharmaceutical there was out there until I would up in a wheelchair,” Coltyn said.

“He got sick and we had no other options,” Coltyn’s mother Wendy Turner said.

Desperate for a miracle his parents moved him from the Midwest to Colorado in 2014 and turned to cannabis oil.

RELATED: Colorado’s Medical Marijuana Studies Are An ‘Opportunity To Guide The Nation’

Their case was just one shared at National Jewish Health’s Marijuana and Health Symposium.

“We are very proud of this program in terms of the potential,” said Ken Gershman with the Colorado Department of Public Health and Environment said.

Gershman says nine current and upcoming studies are looking at marijuana as a treatment for illnesses stretching from insomnia and inflammatory bowel disease to post-traumatic stress disorder.

As for Coltyn, whose gone from hospital beds, to Colorado mountaintops, his family hopes the research leads to action, which will allow families like them to have cannabis oil as a first option, rather than a last resort.

“We want people to understand that this is a good option,” Wendy said.

Saturday’s conference was an opportunity for health care providers and citizens to learn about the latest research into medical marijuana.