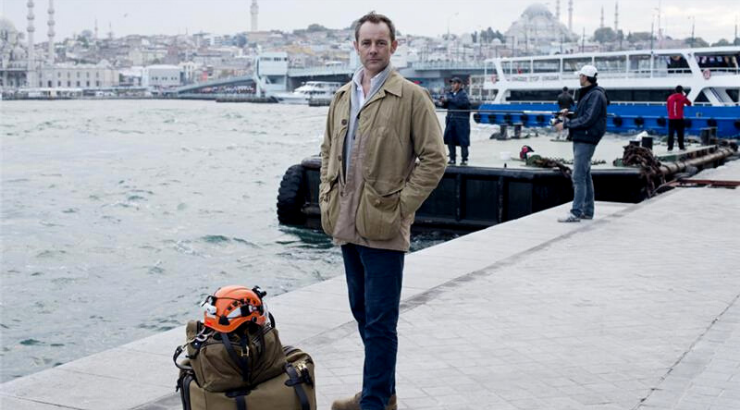 A former British army officer and military contractor who founded the shadowy ‘White Helmets’ has been found dead near his home in Istanbul, days after he was accused by Russia of being a spy with “connections to terrorist groups.”

James Le Mesurier’s body was found Monday in the Beyoglu district of the city, with state-run Anadolu news agency reporting that he may have fallen to his death.

The Syrian Civil Defense family extends its deepest condolences to the James family, and we express our deepest sorrow and solidarity with his family. As we also must commend his humanitarian efforts which Syrians will always remember. pic.twitter.com/t8IvpIhyFV

The White Helmets, a roughly 3,000 member NGO formally known as the Syrian Civil Defense, was established in Turkey in “late 2012 – early 2013” Le Mesurier trained an initial group of 20 Syrians. The group then received funding from Le Mesurier’s Netherlands-based non-profit group, Mayday Rescue – which is in turn funded by grants from the Dutch, British, Danish and German governments.

According to reporter and author Max Blumenthal, the White Helmets received at least $55 million from the British Foreign Office and $23 million from the Agency for International Development. They have also received millions from Qatar, which has backed several extremist groups in Syria including Al Qaeda.

The US has provided at least $32 million to the group – around 1/3 of their total funding – through a USAID scheme orchestrated by the Obama State Department and routed overseas using a Washington D.C. contractor participating in USAID’s Syria regional program, Chemonics.

According to their website, the White Helmets have been directly funded by Mayday Rescue, and a company called Chemonics, since 2014.

Mayday Rescue, as we said, is funded by the Dutch, British, Danish and German governments. And Chemonics?

They are a Washington, D.C. based contractor that was awarded $128.5 million in January 2013 to support “a peaceful transition to a democratic and stable Syria” as part of USAID’s Syria regional program. At least $32 million has been given directly to the White Helmets as of February 2018. –TruthInMedia

Notably, the Trump administration cut US funding to the White Helmets last May, placing them under “active review.”

While the White Helmets tout themselves as ‘first responders’, the group has been accused of staging multiple chemical attacks – including an April 7 incident in Duma, Syria which the White House used as a pretext to bomb Syrian government facilities and bases.

Blumenthal writes, “When Defense Secretary James Mattis cited ‘social media’ in place of scientific evidence of a chemical attack in Duma, he was referring to video shot by members of the White Helmets. Similarly, when State Department spokesperson Heather Nauert sought to explain why the US bombed Syria before inspectors from the OPCW could produce a report from the ground, she claimed, ‘We have our own intelligence.’ With little else to offer, she was likely referring to social media material published by members of the White Helmets.”

Days before Mesurier’s death, Russian foreign ministry spokeswoman Maria Zakharova claimed he was a “former agent of Britain’s MI6, who had been spotted all around the world.”

#Zakharova: The White Helmets’ co-founder, James Le Mesurier, is a former agent of Britain’s MI6, who has been spotted all around the world, including in the #Balkans and the #MiddleEast. His connections to terrorist groups were reported back during his mission in #Kosovo. pic.twitter.com/Fa7JTuP39Z

#Zakharova: The White Helmets stage provocations, help most dangerous terrorist groups and resist the counterterrorist efforts of the Syrian government assisted by other countries. They have planned and carried out a series of ruthless fake chemical attacks. #Syria #Russia pic.twitter.com/ePuiEsb558

Weeks after the Douma incident, Russian officials brought fifteen people to The Hague said to have been present, including 11-year-old Hassan Diab who was seen in a widely-distributed White Helmets video receiving “emergency treatment” in a local hospital after the alleged incident.

“We were at the basement and we heard people shouting that we needed to go to a hospital. We went through a tunnel. At the hospital they started pouring cold water on me,” said Diab, who was featured in the video which Russia’s ambassador to the Netherlands says was staged.

Others present during the filming of Diab’s hospital “cleanup” by the White Helmets include hospital administrator Ahmad Kashoi, who runs the emergency ward.

“There were people unknown to us who were filming the emergency care, they were filming the chaos taking place inside, and were filming people being doused with water. The instruments they used to douse them with water were originally used to clean the floors actually,” Ahmad Kashoi, an administrator of the emergency ward, recalled. “That happened for about an hour, we provided help to them and sent them home. No one has died. No one suffered from chemical exposure.” –RT

Also speaking at The Hague was Halil al-Jaish, an emergency worker who treated people at the Douma hospital the day of the attack – who said that while some patients did come in for respiratory problems, they were attributed to heavy dust, present in the air after recent airstrikes, but that nobody showed signs of chemical warfare poisoning.

According to the governor’s office in Istanbul, “comprehensive administrative and judicial investigations” have been initiated into Le Mesurier’s death.

Perhaps he fell after an Assad operative spiked his tea with polonium, affecting his equilibrium. Whatever the case, it wouldn’t surprise us if this becomes a pretext to ‘liberate’ Syria.