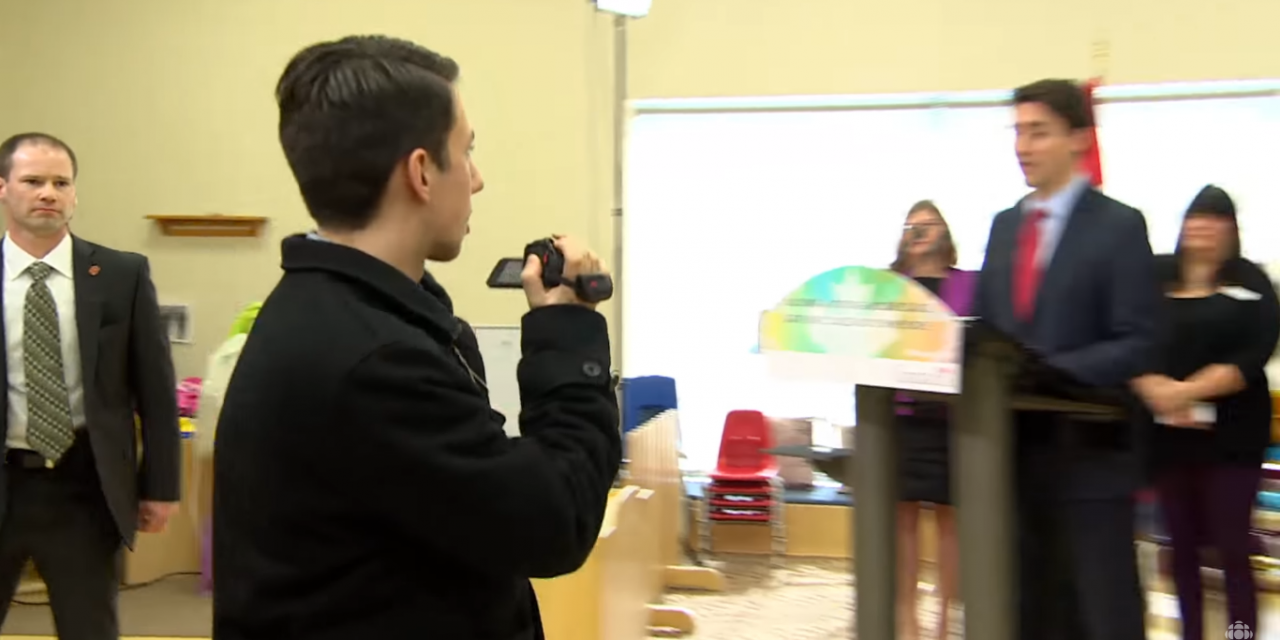 Canadian Prime Minister Justin Trudeau made a last minute stop in Winnipeg to promote his childcare agenda at a YMCA daycare on March 29th. After a photo-op with a bunch of children, the kids were moved out of the room alongside Trudeau, only to return a few minutes later to take questions from the press.

I was granted a media pass to the event, waited patiently for a few hours and was not allowed to ask a question at the microphone. So, I took it into my own hands and between questions, I loudly asked my question for the Prime Minister to hear from a mere 5 feet away. The media was being pre-screened for questions and no real questions were being asked.

I confronted Trudeau on the carbon tax, which will not only be a tax on everything as companies are forced to raise their prices which affects everyone’s wallet, but it also forces impoverished families, especially in rural communities, to choose between heating their home and buying groceries in the winter.

It will bankrupt companies who export goods and puts Canada at a huge disadvantage when it comes to competition.

This all goes back to Maurice Strong and Norway’s Gro Harlem Brundtland, who pushed forward the first climate change depopulation agendas back in the 1970s.

Today, under the United Nations’ Agenda 2030, there is an organized globalist push to completely destroy any fossil fuel industries, depopulate the world, and tax everyone on their carbon footprint, which is in the negative on average in Canada.

Canada’s carbon output only makes up for about 2% of the global footprint. The carbon tax will simply make it impossible for Canadian companies to compete against businesses in foreign countries and puts a stop on small business competition as major corporations continue to be monopolized by the state.

I’ve done several videos in the past on Canada’s carbon tax.

You can see one here:

I was pulled out of the room as I continued to ask Trudeau questions and got no answers, so I decided to call him out for the true globalist puppet he is. I called Trudeau a scumbag followed by saying “Shame on you and your globalist counterparts!”

The event was highly publicized in the media as the mainstream media did a bang-up job of copying and pasting the original article in the Huffington Post, CTV, CBC, Global, City News and others. In fact, Canadian state-run CBC edited their footage to make it seem as though I’d called Trudeau a scumbag while four year old children were present which is absolutely false.

They all left out the fact that I had questioned Trudeau extensively for minutes before calling him a scumbag and simply claimed that he “claimed to be a member of World Alternative Media”.

Clearly they didn’t do two seconds of due diligence. They would have seen that I’m rather well known across Canada and parts of the United States as the founder of World Alternative Media, but that after all is why the mainstream media is dying. 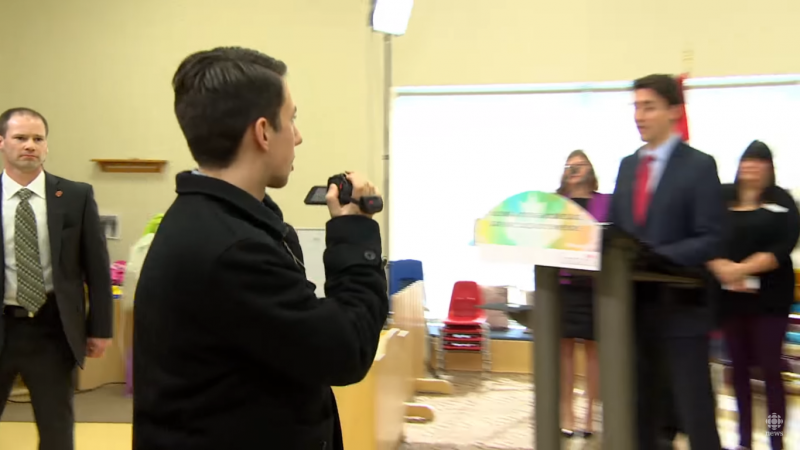 While I usually wouldn’t call someone a scumbag during a confrontation, watching the Prime Minister arrogantly smirk as he posed for a scripted photo-op with children, then claim he cared about those in poverty boiled my blood. Knowing the high quantity of people starving due to the carbon tax or being forced to move from their rural bankrupt communities to the city while he falsely pretends he’s standing up for the environment all while getting support from the top oil companies and lobbies is truly sickening. As I got manhandled by security, I had to get one last jab in.

Of course, that’s how the mainstream media reported it and it’s to be expected. With that said, I regret nothing.

This was the second time I’d successfully confronted Prime Minister Justin Trudeau. I’d confronted him two days before the 2015 election on Bill C-51 which much like the U.S. National Defense Authorization Act, considers all people who openly protest government as “suspected terrorists” and with that, allows the government to arrest people and search their homes without a warrant.

This dramatically opposes the natural individual liberties one is born with. Canada is quickly turning into a cesspool of collectivism. It’s quickly becoming an Orwellian police state as well as a nanny state. Free speech is stifled. Opposition is censored. Debt is abundant and subsidization is blowing sky-high. Corporations are being monopolized by heavy regulations and the poor are getting poorer.

Oh, and for the Americans reading this, no, marijuana is not legal. When it is indeed legal, it’ll simply be another cash grab by the government which will inflate prices and hand most of the industry over to the government. Kind of like taking away your right and giving it back at a price. That’s not a right, that’s the government saying “Let them eat cake!”

I’ve confronted many of the government’s cabinet in the past and have led similar efforts against former Progressive Conservative Prime Minister Stephen Harper. This is simply about consistency, truth and individual liberty.

Confronting the Minister of Finance Bill Morneau on selling off all of Canada’s gold and creating a global currency the week before he attended Bilderberg:

Confronting the Minister of Defense on arming ISIS and supporting Saudi Arabia with weapons: