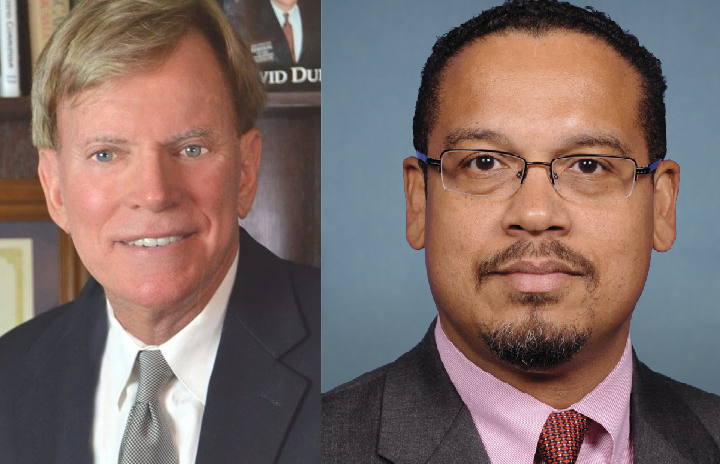 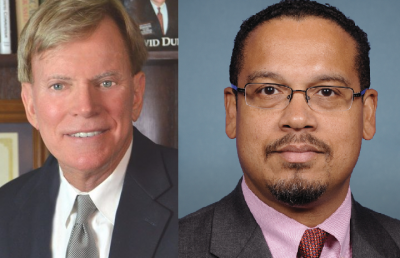 The infamous David Duke has endorsed Keith Ellison, the first Muslim to be elected to Congress, to replace Debbie Wasserman-Schultz as the new chairman of the Democratic National Committee.

After Duke endorsed Donald Trump during the primaries, the liberal media and Democratic establishment exploded with outrage and demands that the then-candidate denounce the white nationalist former Louisiana State Representative. Including Ellison himself:

.@realDonaldTrump, why does KKK leader David Duke like you so much. pic.twitter.com/ZCv5VvXdQz

It seems Duke and Ellison may have some common ground, however, as Ellison is currently under fire for alleged previous involvement with the Nation of Islam — who are widely labeled as being bigoted and anti-Semitic.

Duke was previously a Imperial Grand Wizard in the Ku Klux Klan, and has no qualms about sharing his belief that the media, government, and federal reserve are all controlled by the Jewish people.

On Sunday, Duke tweeted that he “really likes” Ellison because “at least he knows.”

Keith Ellison, Sally Boynton Brown or Jehmu Greene would all be excellent choices – I really like Keith though… I mean, at least he knows. https://t.co/jXQK1CJEie

“Keith Ellison, Sally Boynton Brown or Jehmu Greene would all be excellent choices – I really like Keith though… I mean, at least he knows,” Duke tweeted.

In 2006, Ellison wrote to the Jewish Community Relations Council of Minnesota and the Dakotas claiming that he has “long distanced himself” from the Nation of Islam, in part because of their anti-Semitic sentiments.

“I have long since distanced myself from and rejected the Nation of Islam due to its propagation of bigoted and anti-Semitic statements and actions of the Nation of Islam, [its leader] Louis Farrakhan, and [Farrakhan’s late assistant] Khalid Muhammed,” Ellison wrote.

Once Ellison was elected to Congress however, his sentiments towards Israel and vote against funding the Iron Dome was not viewed favorably by those who support Israel.

In 2010, things escalated even further when Ellison was secretly recorded stating that American foreign policy is “governed” by Israeli interests, the Times of Israel reports.

He was subsequently accused of being “an anti-Semite and anti-Israel individual” by Israeli Democratic Party mega donor Haim Saban.

Things eventually settled down, but have been reignited due to a new report on Ellison’s past from Mother Jones. According to their sources, he did not denounce the Nation of Islam as long ago as he claims.

“Under the byline Keith X Ellison, months after the march that he described as an epiphany, he penned an op-ed in the Twin Cities black weekly Insight News, pushing back against charges of anti-Semitism directed at Farrakhan. In 1997, nearly two years later, he endorsed a statement again defending Farrakhan,” Mother Jones reports. “When Ellison ran (unsuccessfully) for state representative in 1998, Insight News described him as affiliated with the Nation of Islam. Two organizers who worked with him at the time told me they believed Ellison had been a member of the Nation. At community meetings, he was even known to show up in a bow tie, accompanied by dark-suited members of the Fruit of Islam, the Nation’s security wing.”

So, Ellison, to quote — well — you, “why does KKK leader David Duke like you so much?”

Voting for these other people, voting against Keith Ellison at this point, is really treason to the principles of the Democratic Party.#MAGA pic.twitter.com/xnI8s6QVrF