Dear ‘Men’ Who Vote Bernie Sanders: You’re not Men at All.. 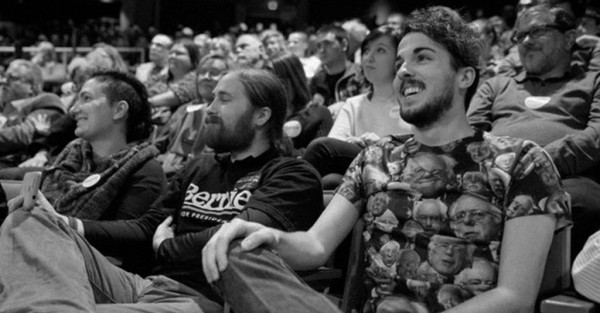 Dear ‘men’ who aren’t actually men but perpetual boys,
Months ago I penned an open letter to real men (Screw Off, Feminists: An Open Letter to Men from a Real Woman). I wrote that letter with great care, honoring a certain kind of man. One who has ambition, self-worth, confidence, and valor is a man worth commemorating–by both women and society. Truth is we do not support men like this often enough. We can and we should cherish men who exhibit traditionally masculine characteristics. They have made the world what it is today. I raise my glass to you gents. I’ve even made you a sandwich.

But on the flip side of these strapping, rugged men there’s you. A Bernie Sanders sycophant with not quite enough self-worth to fill an egg cup. Or a teaspoon. Certainly not enough to fill your bong. Take a good long puff before you read the rest of this, it’s not going to get any better. I’m not going to make you a sandwich either. May I recommend a Hot Pocket?
What is a man? Well, see the opening paragraph for a hint. Read the open letter next. But since you’re a lazy slacker who needs people to take care of him, you probably can’t. It would involve a little extra work to click that link. God forbid you work for something. So allow me to give you a definition of what makes a man…
A man, as defined by this woman, exemplifies the evolutionary behavior of a provider. This can take one of two forms (maybe both) of hunting and/or gathering. The more successful the man is at hunting/gathering, the more masculinity he possesses. In the days of early man, this took the literal form of being a hunter. Those men who could not hunt were skilled enough to “gather.” See where that expression came from? History. Cool, right?
But since we’re living in the modern age, not all men are literal hunters. But many are in a metaphorical sense. Pay attention, I’m getting to the good stuff here. A modern day hunter/gatherer still exudes ambition and drive, he just does it with modern tools, be they physical or digital. He is a man with a decisive attitude, who knows what he wants and goes for it. He doesn’t wane. He isn’t wishy washy. He doesn’t whine about things “not being fair.” He says to hell with it, he’ll find a way to make it happen. He is a man who works hard, no matter the job or career he currently has or is striving for. A masculine, modern day man seeks to better himself. He yearns for and commands respect. He has strength of character, honor, integrity. From women, from other men and most importantly, from himself.
He fends for himself and his family (if he has one). That is a man.
You, the Bernie Sanders supporter, a male seeking hand-outs, lacks personal respect. You’re less like a man and more like a spineless amoeba. You’ve fallen for the party line that “life isn’t fair.” You believe Obama and Sanders who say the “deck is stacked against you.” Where a real man would heartily declare “Challenge accepted,” while forging a path to victory, you hang your head and skulk. You hashtag. You complain. You are a male with no belief in yourself. You’re no a man at all.
You’re also doomed to be overtaken by a feminist, if any woman will have you at all. She might want to be the provider since you cannot provide for yourself or for her. Since the dawn of human beings, women have wanted men who can provide. It’s evolution. It’s biology. As women, we’re hard-wired to want a man who can protect and provide for us when we’re “with child,” as it were. How can we forage or hunt for food while feeding and caring for young babies? We can’t. Enter science. We seek a mate who can take on those responsibilities while we’re caring for the young. Sorry feminists, but such is nature. This is entirely why women like tall, strong, strapping men in power suits. He’s signifying he’s an excellent hunter. And yes, men, this is why women like men with money. It’s a sign of how good he is at hunting and providing.

But you, who votes socialist, are telling the world you’d rather take from people who do the hunting, for you cannot. You are, for all intents and purposes, a wimp. In days of yore, you would’ve been driven out of the tribe. You would have held the entire tribe back. Because you just didn’t feel like going out and hunting. You didn’t feel like gathering. Meh. It’s too hard, you would’ve said. It’s not fair that Thor has bigger muscles than you. It’s not fair that Liam runs faster. It’s not fair that Ulrich has a bigger spear. It’s just not fair.
You’re a “man” who see women as mere walking vaginas, capable of pulling a voting lever. You see me, a woman, as someone who wants a perpetually empty uterus. But I am much more than an opinion on abortion, or someone demanding free birth control.
Where women look for a man who can hunt/gather, who is ambitious, who has honor and respect, who continues to better himself, a man looks for complimentary virtues in a woman. A man sees a woman as more than a monolithic voting group. An honorable man wants an honorable woman, who supports him, who respects him.
Bad news, guys, honorable women do not respect a man who seeks handouts from elected officials. No woman, no potential wife, wants a husband who relies on politicians taking money from someone else’s husband, and giving it to her. Only the weak seek the weak. A real woman, a real man, provide for their own families. It is a wimp, like you, who mandates someone else take care of them.

So enjoy the bean bag. Enjoy the weed. Enjoy the small comforts, for small is all you’ll ever have. You’ll stay locked in a state of perpetual boyhood, constantly complaining about life’s unfairnesses.
The real men will continue to work hard, despite the genuine deck stacked against them. After all, someone has to feed your sorry, pathetic weed-puffing mouth. You certainly won’t.
Read more: http://louderwithcrowder.com/dear-men-who-vote-bernie-sanders-youre-wimpy-and-gross/#ixzz43Aqp5VFy