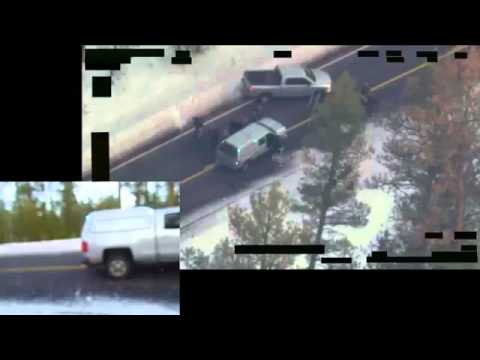 A new video recorded from inside the car driven by Robert “LaVoy” Finicum was released today, capturing the harrowing moments before, during and after he was shot to death in Oregon last January.

The United States Department of Justice also announced it is investigating a group of “elite” FBI agents for partaking in a coverup of the shooting, according to the Oregonian.

It turns out, one FBI agent shot his gun twice, but claimed he never fired his gun.

The USDOJ said those bullets did not strike the Arizona rancher, who had been part of a group of activists occupying the Malheur National Wildlife Refuge throughout January.

Finicum, instead, was shot three times in the back by Oregon state police officers, including one bullet that pierced his heart.

The shooting death was ruled justified because the officers said they were in fear for their lives.

One of the bullets shot by the FBI agent struck his vehicle at a different angle than the other shots, which is what led investigators to determine he had lied.

UPDATE: Oregon Governor Kate Brown and state representative Greg Walden issued statements that they are troubled and concerned over the apparent lies concocted by this elite band of FBI agents.

“Any loss of life is regrettable, and I appreciate that the independent investigation into the actions of Oregon State Police was completed swiftly and thoroughly,”Brown said.

“Additional questions the investigation raised about the actions of federal agents who were also involved are troubling and properly the subject of an ongoing investigation.”

Rep. Greg Walden (R-Hood River) issued the following statement regarding the independent investigation into the circumstances surrounding the death of LaVoy Finicum:

“This independent investigation gives us some answers to what happened, but leaves me disturbed and bewildered by the role of the FBI agents who are now under federal investigation themselves. Meanwhile, I will continue working with local officials to get results on the Steens Mountain fencing issue, federal reimbursement for the local policing costs, and to stop the monument designation in Malheur County, among other resource-related issues.”

One of the claims made by his supporters is that he had been shot on his left side, which is why he reached down towards his waistband.

But investigators cleared that up by saying they only shot him in the back.

Claim: In motions caught on FBI video, Finicum reached for his side after he was shot there by police. He wasn’t reaching for a gun.

Investigation: The state autopsy showed Finicum was shot three times in the back. He had no gunshot wound on his lower left side, the report shows.