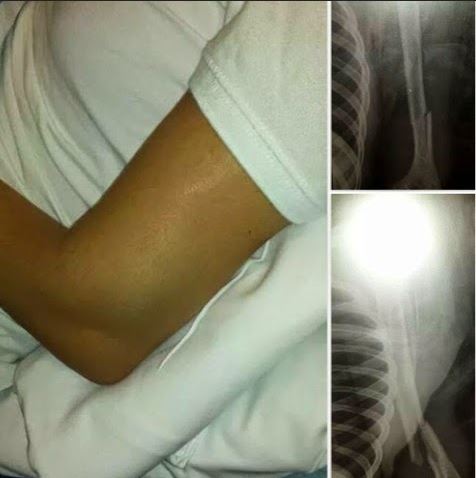 Greenacres Police Officer Jared Nash is accused of breaking a 14-year-old girl’s arm during an arrest attempt that was initiated because the officer attempted to view a video on her cell phone without a search warrant. The officer then arrested the teen for resisting arrest.

The incident happened at the John I. Leonard High School in the Palm Beach County suburb on October 21. According to the arrest report for the girl, whose name is being withheld by New Times because she is a minor, Nash believed she had video evidence on her phone of a fight that occurred at the school. The officer attempted to speak to the girl, but she was speaking to her mother and refused to talk to him.

“I told [her] to put the phone down, but she continued to talk on it,” Nash writes in the report.

The officer then claims that as the girl began walking away, she raised her arm to his stomach level and pushed him back.

“When she did this I took a hold of her left arm,” he writes. Because Nash believed the girl had evidence of a high school fight on her phone, he ordered her to stop, but he says she refused.

“[She] then began to twist and pull her arm around in an increased physical level trying to pull away,” Nash claims. “I then tried placing [her] left hand behind her back to secure her in handcuffs due to her pushing me, her increasing attempts to break away from my grasp, and continuing to try hand the phone to [her friend] despite my orders not to.”

Once the girl was arrested and taken into custody, she complained of a pain in her arm and was taken to the hospital. The arrest report doesn’t mention the broken arm, but the girl’s father tells the Davy V blog — an anti-police-brutality blog — that his daughter’s arm was broken, and he provided photos of the x-rays.

“I want him fired,” the father tells Davy V.

Lt. Brady Myers of the Greenacres internal affairs department says that an investigation of the incident is ongoing and that he could not comment. But when asked to confirm that Nash broke the 14-year-old-girl’s arm during the arrest, Myers tells New Times:

“You saw the pictures on the internet, didn’t you?”

See the arrest report below…