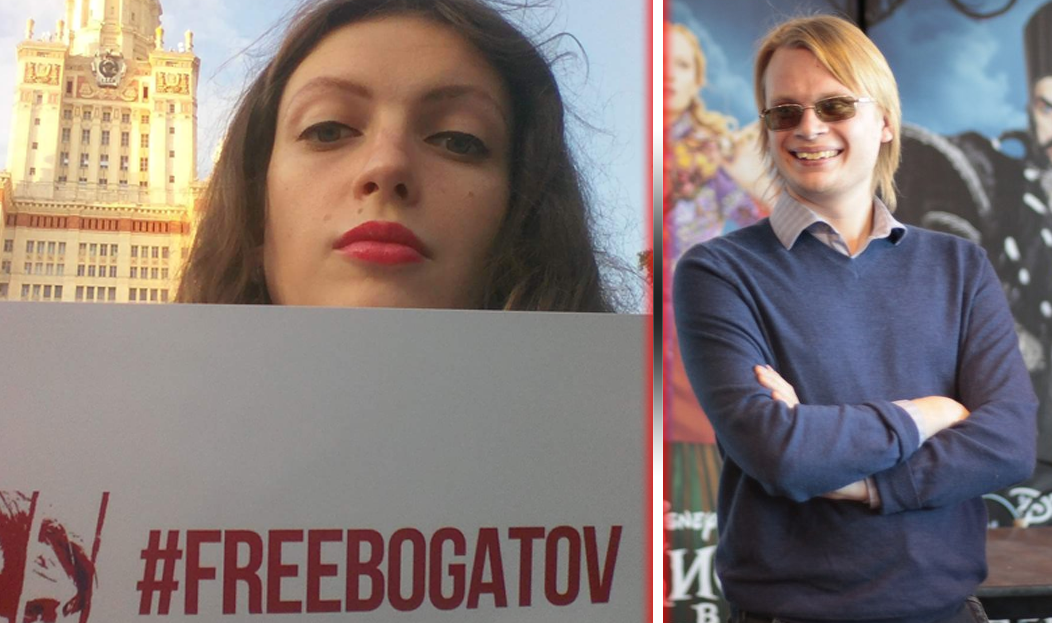 A public hearing for the case against Dmitry Bogatov is taking place on June 28th at 3pm, at Presnenskiy court in Moscow, the #FreeBogatov campaign tweeted today. Family and supporters of Bogatov are calling for maximum support for the Russian software developer who was arrested on April 6th, 2017, for “incitement to mass riots” and “incitement to terrorism”. He denies the allegations.

Bogatov, 25 years old, is also a math lecturer at Moscow’s Finance and Law University and a supporter of free software. Some feel his arrest is more of a punishment for his running a Tor exit node. 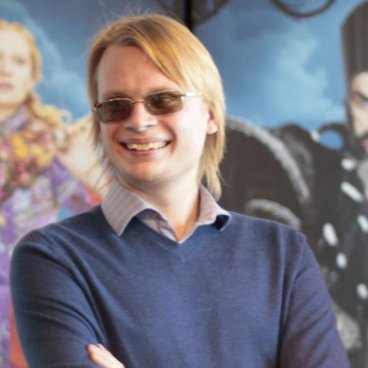 “On March 29, someone with the username “Ayrat Bashirov” and Bogatov’s home IP address wrote a series of posts on the website sysadmins.ru, an online forum for systems administrators. One post called for protesters to go to an unsanctioned, anonymously organized—and ultimately under-attended—demonstration on April 2 with “rags, bottles, gas, turpentine, styrofoam, acetone.” Another post linked to the music video for Kanye West’s “No Church in the Wild,” or, as investigators put it, “a video recording with insubordination to the legal demands of the police, and mass disorder.”

The video depicts a young man with a Molotov cocktail also known as a petrol bomb.

Cohen goes on to explain that:

“Surveillance footage shows Bogatov and his wife leaving a supermarket four minutes before one of the posts was made on March 29. Given that the supermarket is half a kilometer from their home, it is unlikely that Bogatov could have made it home and posted online within four minutes.”

“Furthermore, since Bogatov’s detention, the profile for Ayrat Bashirov has remained active online, making numerous posts, commenting on his own supposed arrest, and even exchanging private messages with a journalist from Open Russia, saying that he is “of course not Bogatov.”

“It appears likely that Bogatov was running a Tor exit node from his home computer. As a user on Geektimes pointed out (and as Tor’s records confirm), several hours before Bogatov’s detention—likely around the time authorities were searching his apartment and seizing his computer equipment—an exit node that had been operating for more than a year and a half under Bogatov’s name went offline. The email address associated with the node matches the address listed on Bogatov’s Github page.”

Accoring to Amie Stepanovich reporting for accessnow.org, ” The arrest comes in the midst of an online crackdown related to anti-corruption protests in cities across Russia on April 2.”

“On the night of April 5, investigators came to Bogatov’s apartment where they seized his computer equipment. They took him into custody the next day. Some hours later, a judge denied the Investigative Committee’s request to hold Bogatov in custody, ruling that the charges were not serious enough to warrant his continued detention. Investigators then added a second and more serious charge of inciting terrorism, and he was brought back into court the following day. This time, a judge approved his detention for another 72 hours.”

Bogatov is arrested April 6th on bogus charges and risks a 20 year sentence.

On April 10, the court upheld the charges, formally arrested Bogatov and ordered that he be held until his trial on June 8. 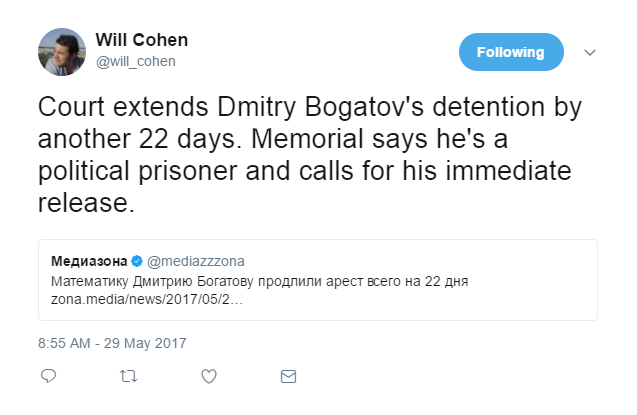 The Tor Project made a statement, see highlights of this below.

What we know right now is that serious accusations of wrongdoing have been made against a valued member of our community, a person who has, among other things, been a Tor relay operator, Debian Developer, GNU developer, and privacy activist. We are collecting facts, monitoring the situation closely, and sharing information with allied organizations and individuals.”

Debian made a statement, see highlights of this below. The Debian Project is an association of Free Software developers who volunteer their time and effort in order to produce the completely free operating system Debian GNU/Linux.

“The Debian Project is concerned to hear that one of our members, Dmitry Bogatov, has been arrested by Russian authorities.

In the meantime, the Debian Project has taken measures to secure its systems by removing Dmitry’s keys in the case that they are compromised.

The Debian Project honours his good work and strong dedication to Debian and Free Software, and we hope he is back as soon as possible to his endeavours.”

Bogatov risks up to 20 years in jail for a #Tor exit node. Global actions next week. Join us! Support Tor = support Bogatov #freeBogatov

“Dmitry’s lawyer, Alexei Teptsov, presented videos from surveillance cameras, that proved that, during the moments when the “incendiary messages” were posted, Dmitry was away from his computer. He was coming back from a fitness center with his wife, Tatiana, a genetician, and then went to a supermarket, where cameras were also working. Moreover, “Airat Bashirov”, the author of the provocative messages, continues to post on sysadmin.ru, while Dmitry is under arrest. The last post was seen on the forum on April 11.

Dmitry will stay in pre-trial detention center until June 8 at least. Now the Investigation is examining all his seized devices.”

There were more anti-corruption protests on June 12th. 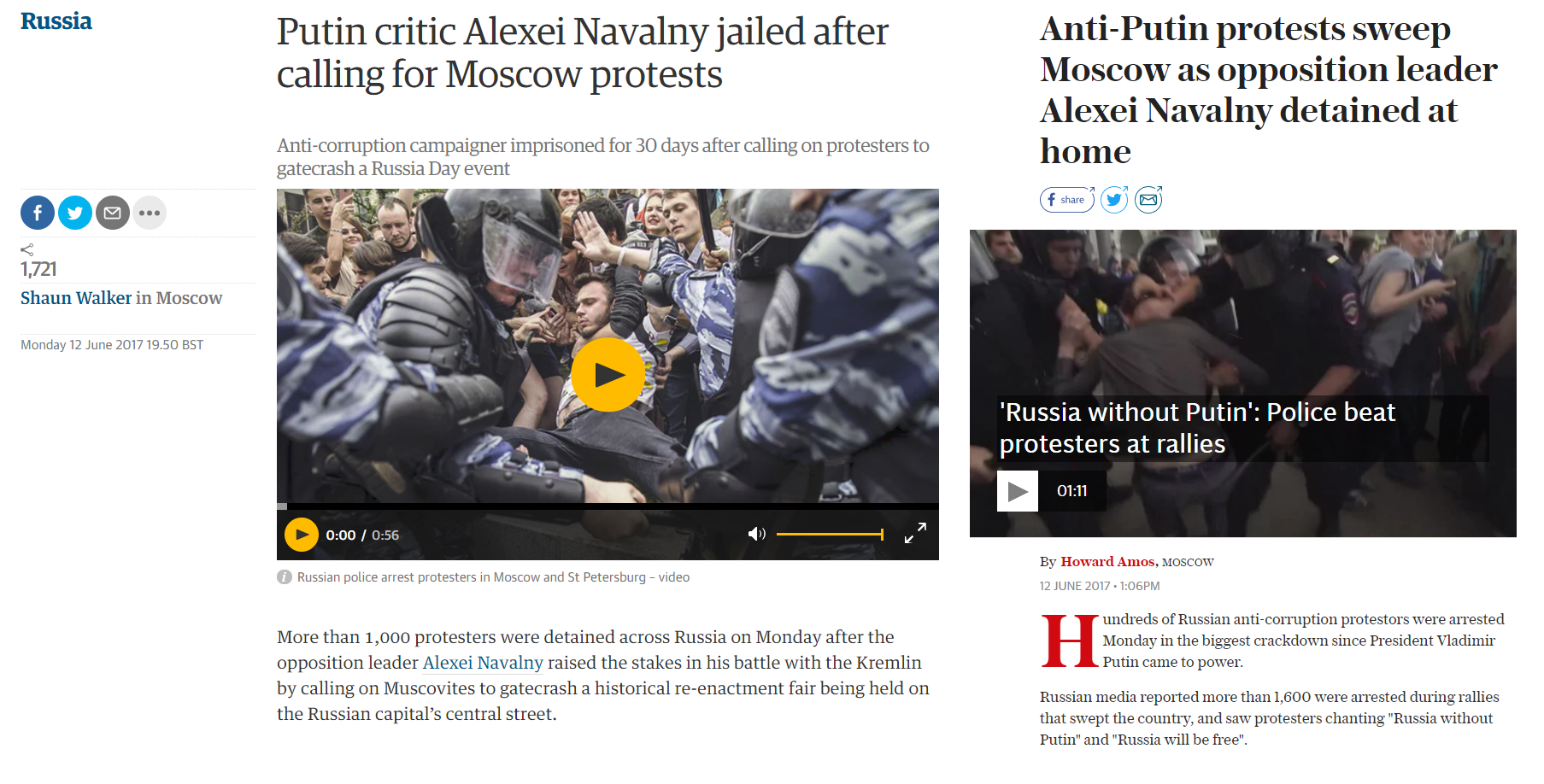 Yulia Koshelyaeva, a freind of Bogatov’s, showing solidarity even during her own arrest.

The Electronic Frontier Foundation or EFF runs a story on Bogatov. 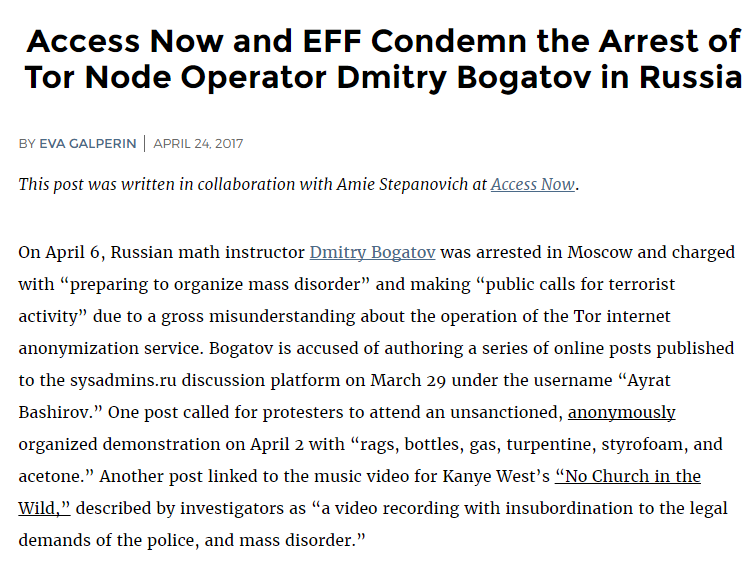 The Electronic Frontier Foundation is the leading nonprofit organization defending civil liberties in the digital world. Founded in 1990, EFF champions user privacy, free expression, and innovation through impact litigation, policy analysis, grassroots activism, and technology development. They work to ensure that rights and freedoms are enhanced and protected as use of technology grows.

Access Now defends and extends the digital rights of users at risk around the world. By combining innovative policy, global advocacy, and direct technical support, Access Now fight for open and secure communications for all.

“Family, friends and his lawyer are asking for international help in protesting this horrible injustice as Dmitry remains in detention/jail.”

“#freeBogatov would like to see protests all over the world on June 19th and 20th. If you are close to a Russian Embassy or consulate, go there and take a selfie/photo of yourself in front of the building holding a sign with his name on it. If you are far from any Russian entity, take a photo of yourself in front of a local landmark. As an example, the Eiffel Tower in Paris.”

Sarah Illingworth interviewed Raymond Johansen for impolitikal.com Johansen is a high profile writer and activist, who sits on the board of Pirate Parties International. He said:

“On June 19 and 20 we ask people all over the world to find any Russian diplomatic mission and take a “selfie” or a photo with #freeBogatov on a piece of paper. If they are not close to any such we ask them to do the same in front of a local landmark. As an example, the Eiffel Tower in Paris. We will have descriptions of how to do this published in many languages shortly.” 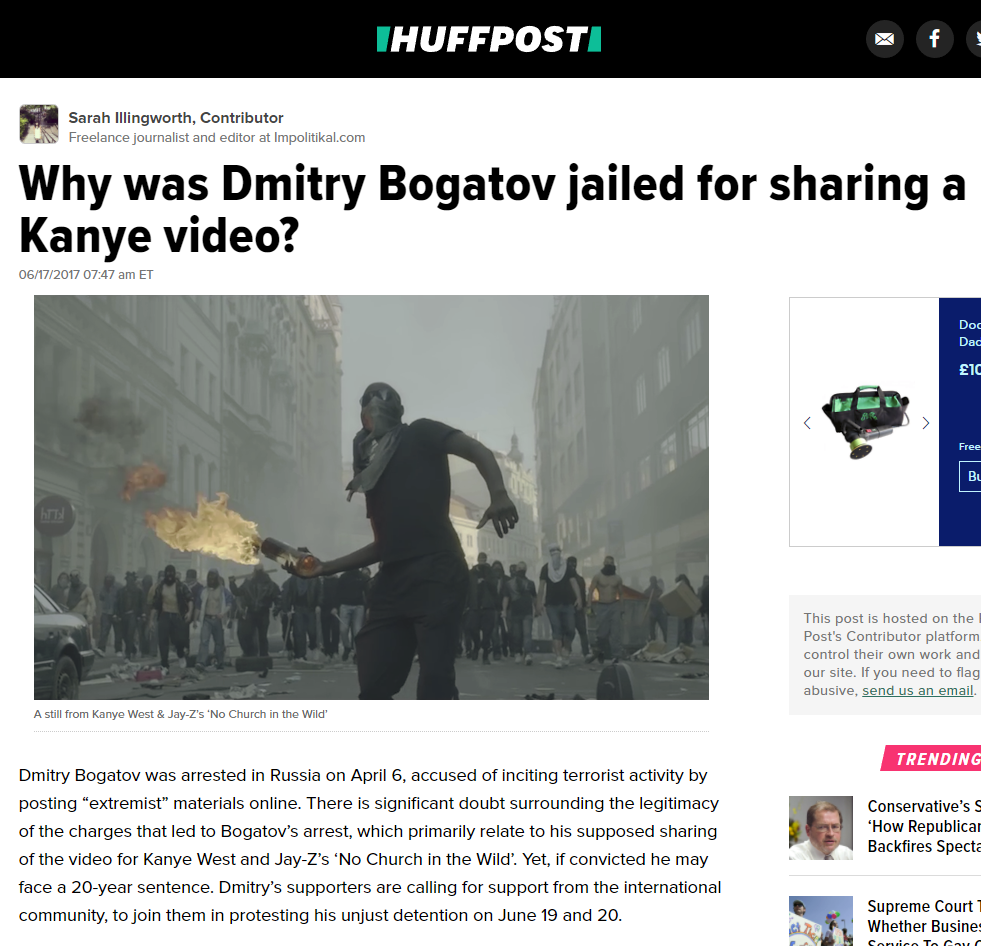 Family and supporters of Bogatov took part in a two-day online-offline event to raise awareness about the case.

Here are some of the tweets people contributed with some well known people joining in such as Edward Snowden and Julian Assange.

Also notice that people from all around the world are supporting Bogatov and know about his case.

The ongoing pre-trial detention of @freeBogatov by Russian prosecutors is stupid and unjust ???? ????????? ?????! #freebogatov @mfa_russia

Privacy is a right & Tor is not a crime. Russia's continued detention of Dmitry Bogatov for operating a Tor node is an outrage. #FreeBogatov

Gathering in Paris in support to Dmitry Bogatov, jailed in Russia for a #Tor exit node. We call for his immediate release! #FreeBogatov pic.twitter.com/dFmg9NJIj0 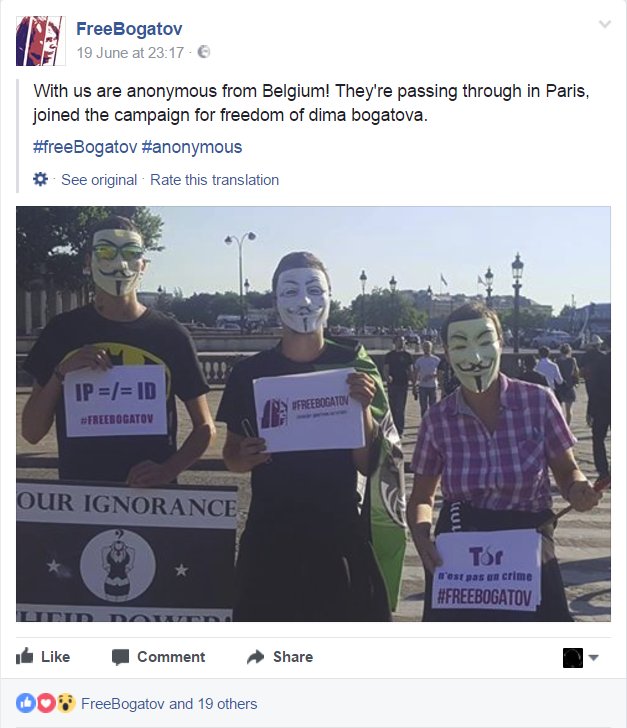 #FreeBogatov Tor is a community we must support Dmitry Bogatov who was arrested for operating a Tor node, this is #Shameful release this man pic.twitter.com/PKGMhWnjwA

Tor, also known as “The Onion Router” is a network originally built by the U.S Navy that allows a user to browse the internet anonymously without fear of exposing the user’s IP address. According to Wikipedia, “…tor directs internet traffic through a free, worldwide, volunteer network consisting of more than seven thousand relays [servers] to conceal a users’ location…”

A malicious user could utilize the tor network and specify something known as an exit node which is the “out” relay, the relay that is the server making the requests to a specified website.

freebogatov.org explains why he is innocent: 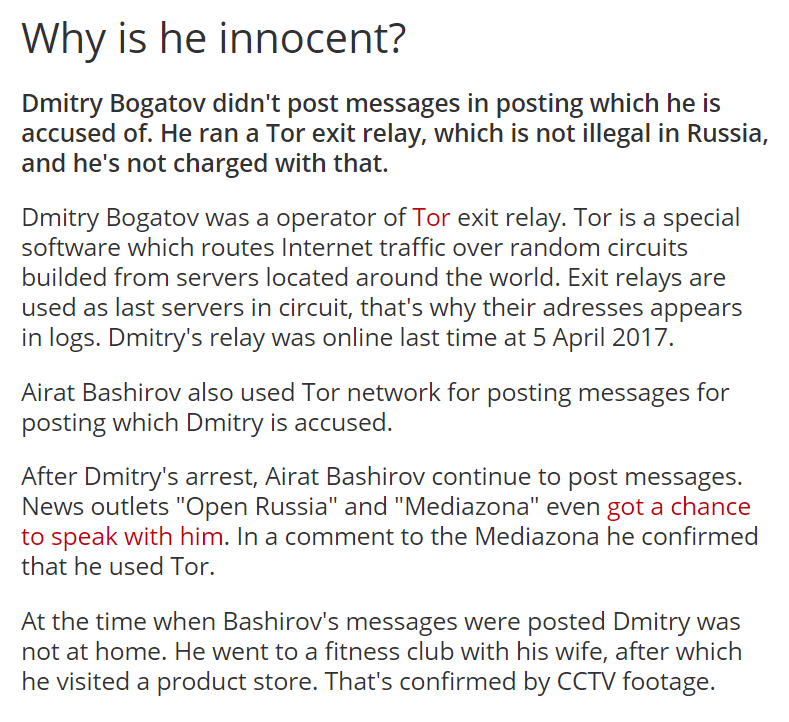 Let us know what you think about this in the comments. Do you use tor? How do you feel about what happened?