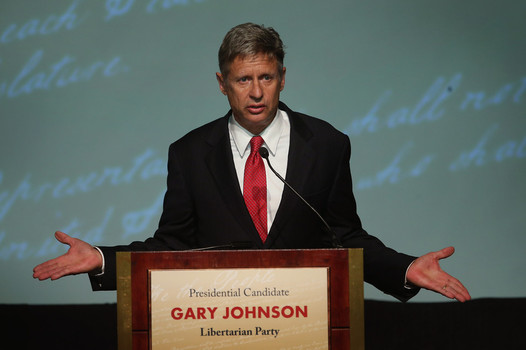 Gary Johnson is expected to announce his candidacy for president on January 6. Johnson, the Libertarian former Governor of New Mexico and former CEO of marijuana company Cannabis Sativa Inc, has long been a favorite of the liberty movement. He ran for office in 2012 as well, garnering 1.2 million votes, the most ever for a Libertarian candidate.

It’s been more or less a foregone conclusion that he would be throwing his hat into the ring from the beginning, with the announcement only serving to make it official. He joins several other candidates who have jumped in, including John McAfee of software fame, big business supporter Steve Kerbel, and Libertarian Republic founder Austin Peterson.

Libertarians have won some high profile victories in recent years, most notably with the legalization of same sex marriage and the crumbling of marijuana prohibition. Additionally, they have helped stoke the public sentiment against government overreach in the area of spying and data collecting. They have also suffered several setbacks recently as well, with the Affordable Care Act, expansion of government spying, anti-immigration sentiment, and anti-gun sentiment all going against them.

However, with the two major party candidates all pushing for more and more expansion of government and stoking the fears of uninformed voters, 2016 could be a another big step forward for the party. While the Democrats put forward the economically illiterate Bernie Sanders and the politically corrupt Hillary Clinton and the GOP puts up the supervillain Donald Trump and the theocratic Ted Cruz (or any number of the other Republicans, really), Libertarians are hoping to grab the contingent that opposes excessive government regulation.

The 2016 campaign has been one of fearmongering by both parties. The GOP is painting Mexican immigrants as roving bands of raping lunatics, Muslims as an entire religion of over a billion terrorists, and that their religion is being somehow persecuted by allowing people equal rights. Meanwhile, Democrats are playing up class warfare and using mass shootings to scare Americans into relinquishing their rights in plans that would have little, if any, positive impact.

The Libertarian movement hopes to gather a more educated crowd who wish to have much more control not only over their own lives, but to allow as many people as possible to enjoy similar freedoms. Unfortunately for them, they often have a hard time getting out of their own way by spending too many of their resources arguing over ideological purity rather than putting forward plans and alternatives that are practical and workable.

Still, having a big name in the race will only help to highlight how far down the path of statism the other two major parties have gone. If nothing else, it may force the eventual nominees to move, if only a little bit, away from big government plans that serve only to make things worse in nearly every situation.