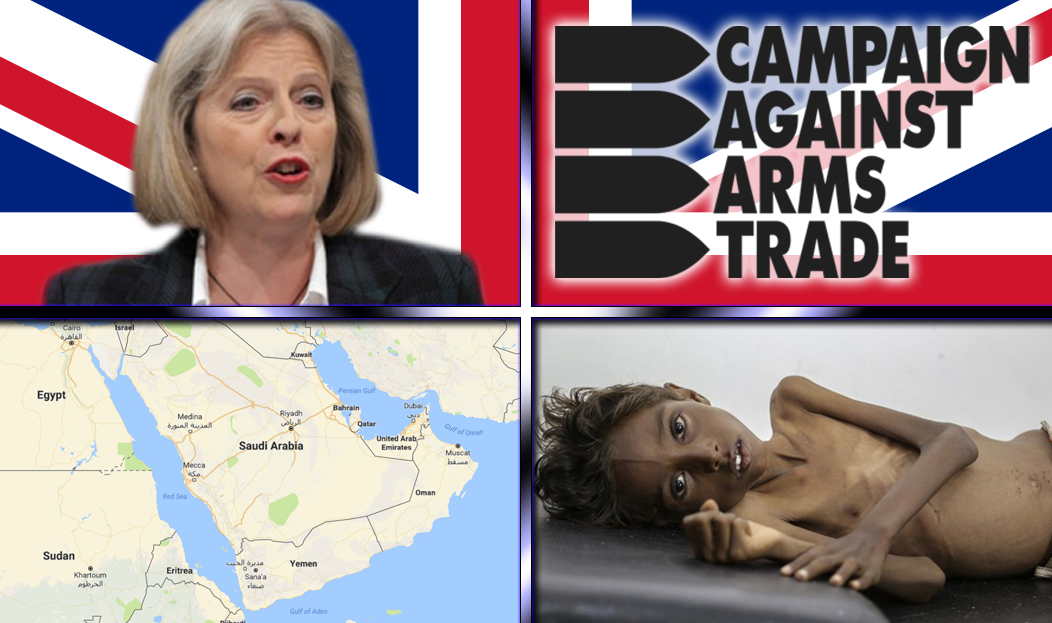 Activists from Campaign Against the Arms Trade (CAAT) have lost a high-profile case which called for the end of UK arms sales to Saudi Arabia on humanitarian grounds. The High Court ruled the Government is not breaking the law by continuing to sign off the sale of arms to Saudi Arabia.

BREAKING: The High Court has ruled that arms sales to Saudi Arabia can continue #StopArmingSaudi pic.twitter.com/M28GgzrCIN

CAAT’s website states that Law firm Leigh Day, “…argued that a range of international organisations including the European Parliament and many humanitarian NGOs, have condemned the ongoing Saudi air strikes against Yemen, as unlawful.” The site states that this is backed up by the fact that “In January 2016, a United Nations Panel of Experts accused Saudi Arabian forces of ‘widespread and systematic’ targeting of civilians.”

CAAT also reports that half of the hearings were conducted in ‘closed sessions’ which neither the claimant nor their lawyers were given access to.

Regardless of the high civilian casualty rate, CAAT tells us that “…the UK has continued to arm the Saudi regime…” and that “Since the bombing of Yemen began in March 2015, the UK has licensed £3.3 billion worth of arms to the Saudi regime…”. CAAT’s website says this includes:

Andrew Smith of Campaign Against Arms Trade made this statement on the verdict:

“This is a very disappointing verdict, and we are pursuing an appeal. If this verdict is upheld then it will be seen as a green light for government to continue arming and supporting brutal dictatorships and human rights abusers like Saudi Arabia that have shown a blatant disregard for international humanitarian law.

Every day we are hearing new and horrifying stories about the humanitarian crisis that has been inflicted on the people of Yemen. Thousands have been killed while vital and lifesaving infrastructure has been destroyed.

This case has seen an increased scrutiny of the government’s toxic relationship with Saudi Arabia. It is a relationship that more than ever needs to be examined and exposed. For decades the UK has been complicit in the oppression of Saudi people, and now it is complicit in the destruction of Yemen.”

Rosa Curling from Leigh Day said that, “The judgement today is very disappointing and our client has put in an immediate application to appeal which we hope will be granted.”

We're disappointed in this verdict and will be pursuing an appeal process. We aim to fight it every step of the way #StopArmingSaudi

Curling went on to say:

“We hope very much the court of appeal will consider CAAT’s claim as a matter of priority. Our government should not be allowing itself to be complicit in the grave violations of law taking place by the Saudi coalition in Yemen.”

Rachael Swindon took to Twitter to remind her followers of a claim made by The Guardian that senior figures in Saudi Arabia had made alleged payments of up to £7 million in the period just preceding the 1992 General Election. CORE, a site which aggregates research papers, says, “This accusation was strongly denied by both the Conservative Party and the Saudi government but nonetheless heightened disquiet about sources of Conservative Party income.”

I don't claim to be Einstein, but if I can work out how bent this government is then anyone can. #StopArmingSaudi @theresa_may pic.twitter.com/bLei4zATzT

James Melville shared a video of May talking about wanting to diminish terrorism at the 2017 G20 Hamburg summit which was held on July 7–8 , at Hamburg Messe, in the city of Hamburg, Germany.

Sheer hypocrisy.
Theresa May calls on G20 to combat terrorism, yet, she continues to sell weapons to Saudi Arabia.pic.twitter.com/pGZhlAdmOH

You would think that with the four, count them four, terrorist attacks that have taken place in the UK recently, May would be looking to downgrade the relationship with a terror funding and exporting state like Saudi but obviously not. 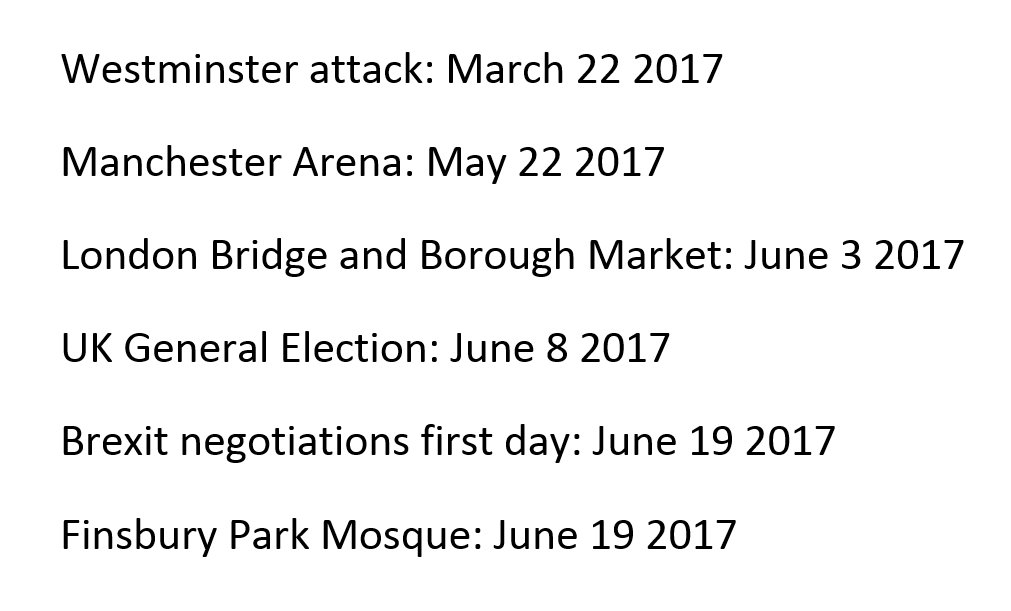 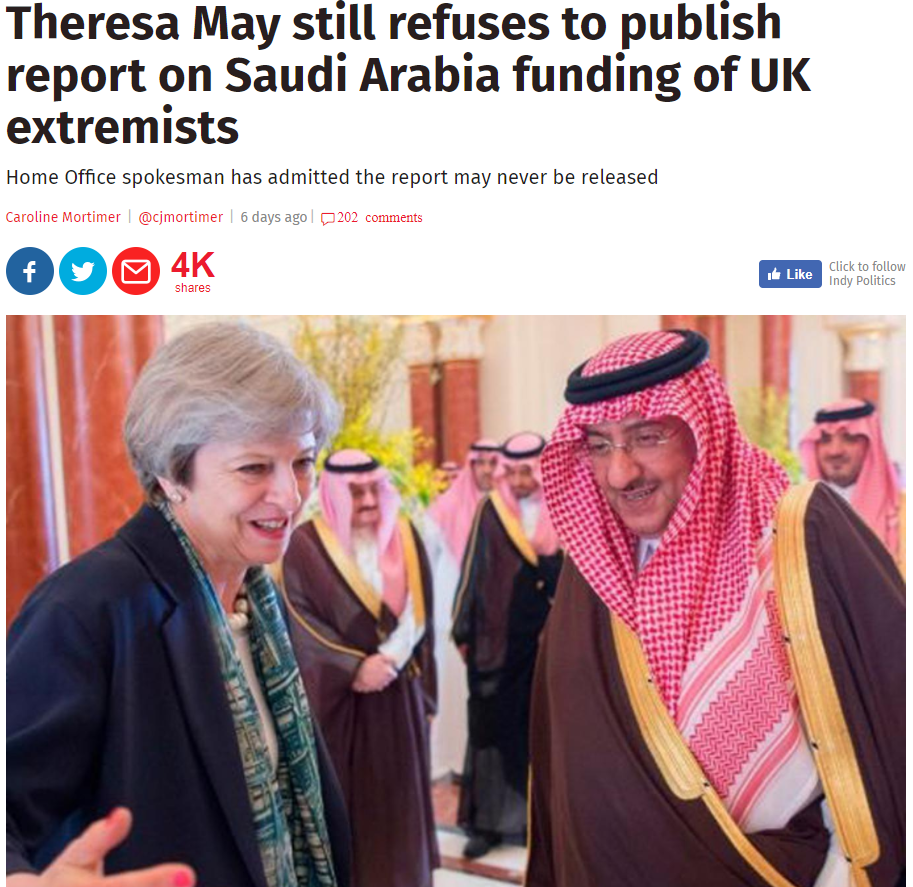 Why would she do this? Perhaps to attempt to protect the reputation of Saudi Arabia but more importantly, May is protecting HSBC.

Nicholas Wilson aka “Mr Ethical“, a whistleblower and anti-corruption campaigner from the UK, thinks the real reason is the HSBC/Saudi Aramco deal. Aramco is an acronym for Arabian American Oil Company.

Aramco is the world’s largest oil firm with crude reserves of about 265 billion barrels which is over 15 percent of all global oil deposits. In January 2017, Saudi Arabia’s national oil company was opened to Western investors.

On April 4, 2017, May held a meeting with the Aramco chairman Khalid Al-Falih, who is also Saudi Arabia’s energy minister. The aim of the talks with Saudi Arabia’s state-owned oil company was to agree the use of the London Stock Exchange for the biggest share flotation in history.

“Saudi Aramco is expected to be valued at £1.6 trillion when it sells five per cent of its shares on the open market. The flotation will be hugely lucrative to the city that hosts it, when shares worth millions of pounds will change hands.” 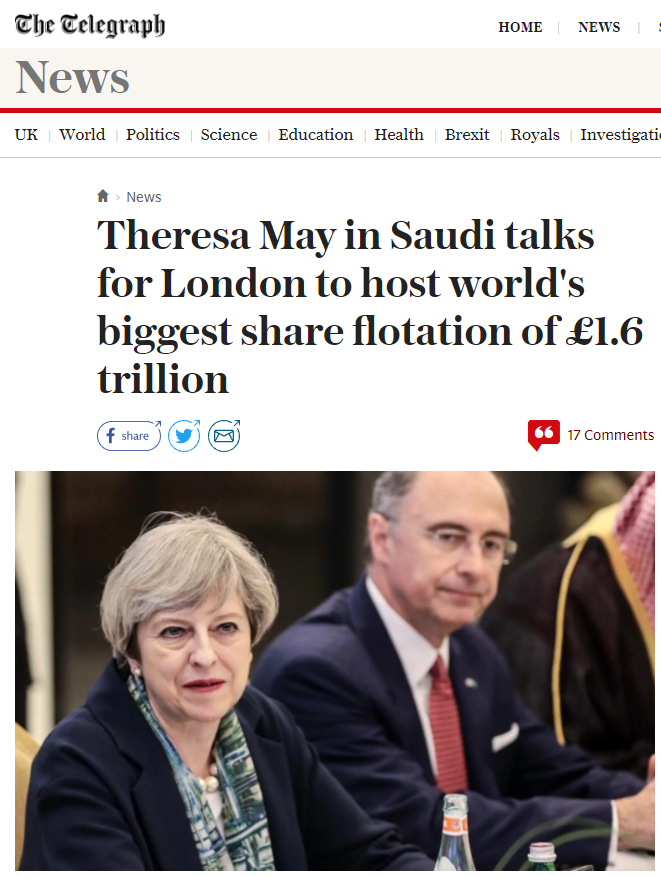 Although the Telegraph’s article doesn’t mention it, May was in Saudi to lobby on behalf of HSBC. On April 24 2017, Reuters reported that HSBC Holdings had been formally mandated as an adviser on the initial public offering of Saudi Arabia’s national oil giant and that it was expected to be the world’s largest ever IPO.

Initial public offering (IPO) or stock market launch is a type of public offering in which shares of a company usually are sold to institutional investors that in turn, sell to the general public, on a securities exchange, for the first time.

Could this be why May is not releasing the Saudi terror report? https://t.co/MWSBXrQ7Py pic.twitter.com/qbQ1kbTuTQ

As Mr Ethical points out, the main stream media won’t talk about these things but WeAreChange will! 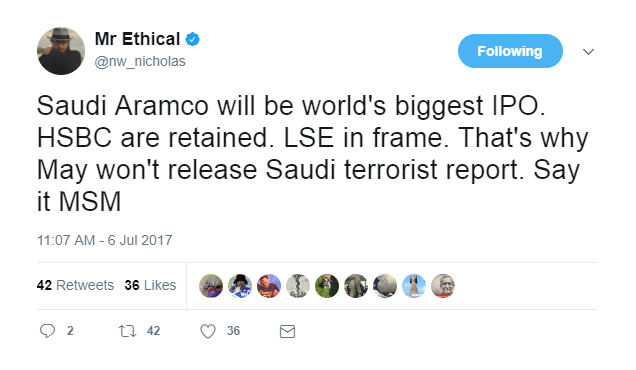 The government’s sale of arms to Saudi Arabia may well be declared lawful, however I’m not sure how comforting that is to the people of Yemen who are being slaughtered by them.

Let us know what you think about this in the comments. How do you feel about what happened?