How Much Radiation is Emitted by Popular Smartphones?

Smartphones have become an integral part of our everyday lives. From work and school to daily tasks, these handheld devices have brought everything into the palm of our hands.

Most people spend 5-6 hours on their phones each day. And, as Visual Capitalist’s Anshool Deshmukh and Sabrina Lam detail below, given that our phones emit a tiny amount of radiation, we’re exposing ourselves to radiation for hours each day.

With the help of data collected by the German Federal Office of Radiation Protection, we visualize the radiation emissions of some popular smartphones in the market today. 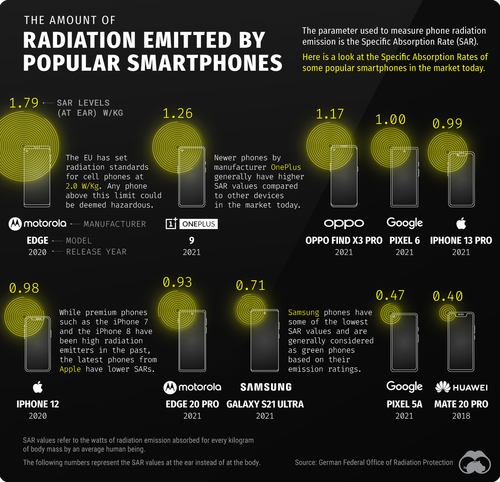 Radiation and SAR Values of Smartphones

Smartphones and other mobile devices emit tiny amounts of radiofrequency (RF) radiation. Humans can absorb this radiation when the smartphone is being used or is lying dormant anywhere near their bodies.

The parameter used to measure phone radiation emissions is the Specific Absorption Rate (SAR). It is the unit of measurement that represents the quantity of electromagnetic energy absorbed by the body when using a mobile device.

The Council of the European Union has set radiation standards for cell phones at 2.0 watts per kilogram, measured over the 10 grams of tissue that is absorbing the most signal.

SAR values are calculated at the ear (speaking on the phone) and at the body (kept in your pocket). For the purposes of this article, we’ve used the former calculations.

Smartphones With the Highest Levels of Radiation Emissions

The Motorola Edge has the highest radiation emission with a SAR value of 1.79 watts of radiation per kilogram. That’s significantly higher than most other smartphone models in the market today and close to the limits set by the EU for cellphones.

Here is a look at the 10 smartphones that emit the highest level of radiation: 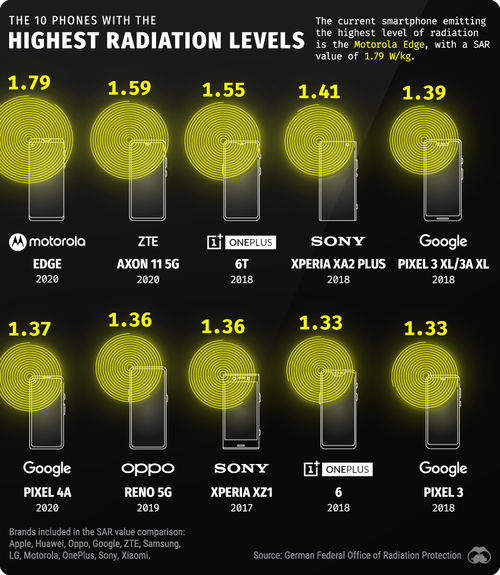 Now that we have detailed the worst offenders let’s look at the smartphones with the lowest levels of radiation emissions.

Smartphones With the Lowest Levels of Radiation Emissions

The smartphone with the lowest SAR value is the ZTE Blade V10, with 0.13 watts of radiation per kilogram.

Mobile devices by Samsung carry some of the least radiation risk. The company has four phones considered to be the best in the category. The Galaxy Note 10+ is the best model in their line-up, emitting a meager 0.19 watts per kilogram.

Here is a look at the 10 smartphones that emit the lowest levels of radiation: 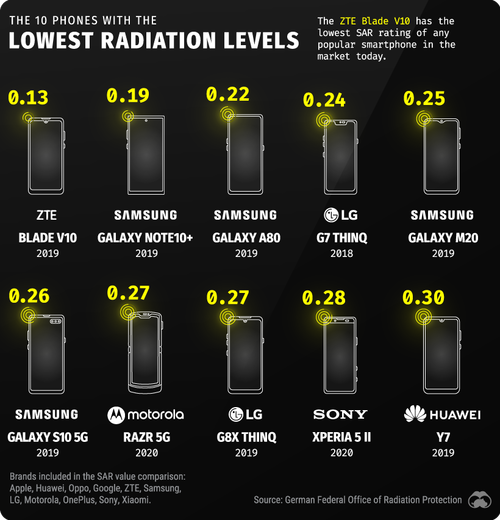 There is currently no significant research proving the harmful effects of phone radiation.

Despite this, people who are in contact with their devices for extended periods can at least quantify their radiation exposure and make choices about which brands serve their needs.