In 2014, Police Killed Nearly Twice as Many Americans than Mass Shooters Combined Since 1982 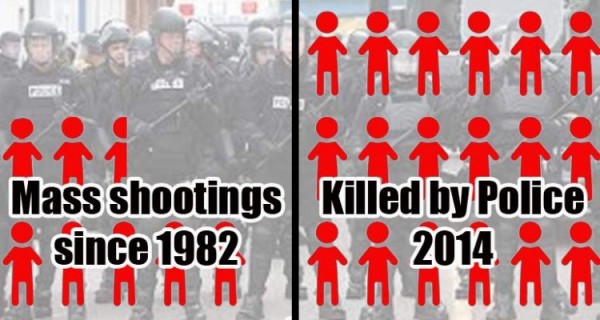 As Karl Rove calls for repealing the second amendment, this behind the scenes Republican puppet master epitomizes what those in favor of gun control really want — only the government can have guns.
Every time a lunatic, who is usually on some form mind altering pharmaceutical, goes on a shooting rampage, the do-gooders in Washington, with the aid of their citizen flocks, take to the TV and the internet to call for disarming the American people.

The citizens who call for themselves and their neighbors to be disarmed, likely think no deeper than the shallow speeches given by the political blowhards, designed to appeal to emotion only. They do not think of what happens during and after the government attempts to remove guns from society. They also completely ignore the fact that criminals do not obey laws and making guns illegal would have zero effect on criminals possessing guns.

In the perfect statist world in which only the government has guns, we’re told that crime rates would plummet, people wouldn’t be murdered, gun violence would be brought to its knees, and a disarmed heaven on Earth would ensue. But how effective would disarming the citizens actually be at preventing gun violence, while at the same time keeping guns in the hands of government?

One simple way to determine the outcome would be to compare mass shootings in America with those killed by police only. It is entirely too easy to compare all senseless murders carried out by the state to those carried out by citizens, so we will zoom in with a microscope.

However, just as a point of reference, in the 20th Century alone, governments were responsible for 260,000,000 deaths worldwide. That number is greater than all deaths from illicit drug use, STD’s, Homicides, and Traffic Accidents — combined.

Now, on to the micro-comparison.

The total number of people killed by police in America this year, as of June 22, 2015, is 533. This number is set to increase by one, on average, every 8 hours.

We are comparing a time period of 30 years, to 6 months and the ratio is nearly 1 to 1, citizens killed by cops vs. citizens killed in mass shootings. That is a 60-fold difference.

That is a staggering number and should shock the conscious. But for the sake of sensationalism, let’s compare all of 2014 to the number of mass shooting deaths.

In 2014 alone, cops killed almost double the amount of people killed in all US mass shootings in the last 30 years. Read that sentence again to really let it sink in.

As the blowhards spew their nonsense about grabbing guns from law-abiding citizens and Obama insinuates that mass shootings are the “new norm,” all of these people conveniently ignore the giant pink elephant in the living room — cops in America are killing citizens at an alarming rate!

In the United States, the overall homicide rate is 5 per 100,000 among the citizens.

According to Edward Stringham, of the NY Daily News, although official statistics have historically been scant, we now know that police killed 1,100 Americans in 2014 and 476 Americans in the first five months of 2015. Given that America has roughly 765,000 sworn police officers, that means the police-against-citizen kill rate is more than 145 per 100,000.

The police kill rate is nearly 30 times that of the average citizen, yet somehow people still call for disarming citizens and say nothing about the police.

The next time your brainwashed friends try to tell you that citizens should be disarmed, tell them what that really means; they only want cops, who kill indiscriminately, with zero accountability, and far more often, to be the ones with guns.