“Largest Distribution Ever”: Thousands of Cars Lined Up at Texas Food Bank

According to CBS News, the North Texas Food Bank (NTFB) handed out more than 600,000 pounds of food this past weekend to 25,000 hungry people.

Thousands of cars lined up to collect food in Dallas, Texas, over the weekend, stretching as far as the eye can see. pic.twitter.com/xLFGOcBkPK

Saturday’s event was the “largest-ever” food giveaway as described by NTFB. As shown below, aerial photos reveal vehicle lines stretched miles down the street.

Samantha Woods, a Dallas, Texas resident who was waiting in line, told CBS, “I see blessings coming to us cause we all struggling. And I appreciate North Texas helping us out.”

Cynthia Culter, another Dallas resident, said, “I haven’t been working since December, can’t find a job, they cut my unemployment, it’s a real big deal.”

NTFB spokeswoman Anna Kurian told CNN that “forty percent of the folks coming through our partners’ doors are doing so for the first time.”

NTFB President Trisha Cunningham said she is proud of her team “for providing some hope and care during these extraordinary times.”

“It was quite a humbling scene to see so many in need,” Cunningham told CNN.

Internet searches for “drive thru food bank near me” are absolutely erupting. 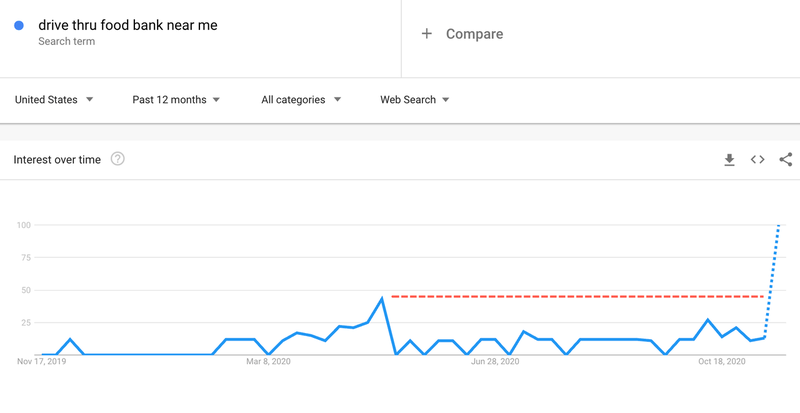 While the virus-induced downturn may be over for the rich, as stocks and real estate prices catapult higher, working-poor folks have been financially ruined in the last eight-month.

Huge demand for food banks nationwide could result in a “meal shortage” within the next 12 months.