In a story that has taken the Internet (or, what’s left of it) by storm Tuesday morning, ProPublica, a non-profit investigative newsroom somehow obtained sensitive tax information belonging to some of America’s wealthiest individuals: including Jeff Bezos, Elon Musk, Carl Icahn, Michael Bloomberg, and even Warren Buffet.

The data showed that the wealthiest Americans largely avoid paying income taxes because they don’t earn very much income – at least on paper. Most of their wealth is tied up in the companies they own.

ProPublica used the data (it’s worth noting that leaking personal tax data is seriously illegal) to perform a new calculation: the “true tax” bill of America’s wealthiest individuals. The “vast trove” of tax data obtained by PP, which goes back some 15 years, showed that not just their income and taxes, but their investment returns, stock trades and gambling winnings. Some of the data even showed the results of audits carried out by the IRS.

While PP won’t disclose how it obtained the data, it affirmed that all of the data was vetted by representatives of the individuals involved. Several provided a statement to PP, including Warren Buffett, who didn’t directly address PP’s calculations

To finish off the “true tax” calculation, PP used the data for the 25 wealthiest Americans along with estimates of how their wealth grew each year provided by Forbes (which meticulously tracks this information).

Michael Bloomberg, the former NYC mayor and Bloomberg LP owner (one of the world’s largest private companies), has used his media empire to promote his opposition to the wealth tax.

So it shouldn’t be a surprise that PP’s calculation of his “true tax” bill found he paid just 1.3% of the total amount by which his wealth increased. 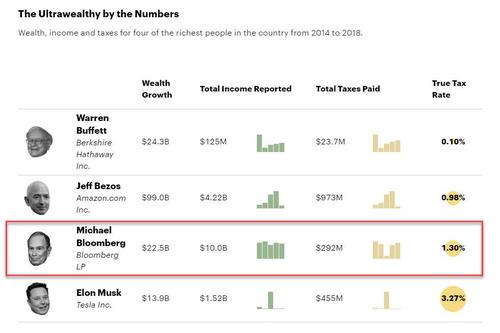 But the most shocking revelation from PP’s calculations is that Warren Buffett paid just $23.7MM on $24.3 billion in new wealth, a “true” tax rate of just 0.1%, the lowest of the top 25.

At one point, PP compared the tax paid by the wealthiest to the average American, purporting to show that average working people pay much higher tax rates.

Our analysis of tax data for the 25 richest Americans quantifies just how unfair the system has become.

For comparison, it would take 14.3 million ordinary American wage earners put together to equal that same amount of wealth.

The bill for the wage earners: $143 billion.

PP acknowledges that there’s nothing in the Constitution calling for a wealth tax, and that Supreme Court precedent shows that an individual needs to sell an asset before being taxed.

Four years later, the Supreme Court agreed. In Eisner v. Macomber, the high court ruled that income derived only from proceeds. A person needed to sell an asset — stock, bond or building — and reap some money before it could be taxed.

Since then, the concept that income comes only from proceeds — when gains are “realized” — has been the bedrock of the U.S. tax system. Wages are taxed. Cash dividends are taxed. Gains from selling assets are taxed. But if a taxpayer hasn’t sold anything, there is no income and therefore no tax.

But the Eisner v Macomber ruling has many critics. However, the fact remains, while many wealthy people engage in borderline-illegal tax evasion, for the wealthiest Americans, taxes can be avoided easily and legally simply by borrowing against their assets instead of selling their holdings. This is why Elon Musk struck his pay deal with Tesla that he would be paid essentially nothing in salary, and everything in “incentive-based” equity.

In the here and now, the ultrawealthy use an array of techniques that aren’t available to those of lesser means to get around the tax system.

Certainly, there are illegal tax evaders among them, but it turns out billionaires don’t have to evade taxes exotically and illicitly — they can avoid them routinely and legally.

Most Americans have to work to live. When they do, they get paid — and they get taxed. The federal government considers almost every dollar workers earn to be “income,” and employers take taxes directly out of their paychecks.

The Bezoses of the world have no need to be paid a salary. Bezos’ Amazon wages have long been set at the middle-class level of around $80,000 a year.

For years, there’s been something of a competition among elite founder-CEOs to go even lower. Steve Jobs took $1 in salary when he returned to Apple in the 1990s. Facebook’s Zuckerberg, Oracle’s Larry Ellison and Google’s Larry Page have all done the same.

Yet this is not the self-effacing gesture it appears to be: Wages are taxed at a high rate. The top 25 wealthiest Americans reported $158 million in wages in 2018, according to the IRS data. That’s a mere 1.1% of what they listed on their tax forms as their total reported income. The rest mostly came from dividends and the sale of stock, bonds or other investments, which are taxed at lower rates than wages.

This is also why Buffett’s Berkshire Hathaway doesn’t pay a dividend. He has long argued that it’s better for him to take that money and bring in new investments for Berkshire. Those investments raise the stock price, creating wealth without a taxable event. Buffett delivered a detailed response to PP, which the organization shared in full. You can read it here.

As for loans, PP explains why borrowing is so much more cost-effective for the wealthiest Americans, who often have credit lines ranging into the billions of dollars.

The tax math provides a clear incentive for this. If you own a company and take a huge salary, you’ll pay 37% in income tax on the bulk of it. Sell stock and you’ll pay 20% in capital gains tax — and lose some control over your company. But take out a loan, and these days you’ll pay a single-digit interest rate and no tax; since loans must be paid back, the IRS doesn’t consider them income. Banks typically require collateral, but the wealthy have plenty of that.

The vast majority of the ultrawealthy’s loans do not appear in the tax records obtained by ProPublica since they are generally not disclosed to the IRS. But occasionally, the loans are disclosed in securities filings. In 2014, for example, Oracle revealed that its CEO, Ellison, had a credit line secured by about $10 billion of his shares.

Last year Tesla reported that Musk had pledged some 92 million shares, which were worth about $57.7 billion as of May 29, 2021, as collateral for personal loans.

For borrowers like Carl Icahn, who took out a massive $1.2 billion loan with Bank of American that was technically a mortgage (since it was secured by his Manhattan penthouse), borrowing offers two advantages: he doesn’t need to sell his assets, and he can deduct his interest from the final tax bill.

The IRS records provide glimpses of other massive loans. In both 2016 and 2017, investor Carl Icahn, who ranks as the 40th-wealthiest American on the Forbes list, paid no federal income taxes despite reporting a total of $544 million in adjusted gross income (which the IRS defines as earnings minus items like student loan interest payments or alimony). Icahn had an outstanding loan of $1.2 billion with Bank of America among other loans, according to the IRS data. It was technically a mortgage because it was secured, at least in part, by Manhattan penthouse apartments and other properties.

Borrowing offers multiple benefits to Icahn: He gets huge tranches of cash to turbocharge his investment returns. Then he gets to deduct the interest from his taxes. In an interview, Icahn explained that he reports the profits and losses of his business empire on his personal taxes.

Icahn acknowledged that he is a “big borrower. I do borrow a lot of money.” Asked if he takes out loans also to lower his tax bill, Icahn said: “No, not at all. My borrowing is to win. I enjoy the competition. I enjoy winning.”

As for whether the rich should owe taxes without registering income, Icahn insisted that taxing an individual “no matter what” wouldn’t be appropriate. ”

“There’s a reason it’s called income tax,” he said. “The reason is if, if you’re a poor person, a rich person, if you are Apple — if you have no income, you don’t pay taxes.” He added: “Do you think a rich person should pay taxes no matter what? I don’t think it’s germane. How can you ask me that question?”

Unfortunately for Icahn, Jamie Dimon and their ilk, Democrats and their voters increasingly support a wealth tax, largely thanks to Sens. Elizabeth Warren and Bernie Sanders, who – thankfully for President Biden – split the left-wing vote during the Democratic Primary.

Opponents of these measures, as ProPublica points out, might argue that billionaires pay far more in taxes when one factors in corporate income taxes paid by the corporations they own, and after death, those with fortunes greater than $11.7MM pay a steep tax rate, the estate tax, which many (like Bill Gates) avoid by pledging their fortunes to “philanthropy”.

So how can this be remedied? PP seems to suggest that a ‘wealth tax’ is the best option, since increasing corporate tax rates wouldn’t directly impact the wealthiest (though it will likely impact the market returns of their assets, prompting their wealth to grow more slowly, or perhaps even shrink). On the corporate tax front, President Biden is trying to crack down on what PP described as a “golden era of corporate tax avoidance” with a new G-7 agreement on a minimum corporate tax rate, however they face resistance from low-tax countries like Ireland, Singapore and others.

Anti-trust authority Matt Stoller suggested one tactic that might help, however: Congress could pass a law forcing the IRS to publicize the taxes paid by the wealthiest Americans, attempting to shame them into compliance. Or, President Biden can pick up where President Trump left off on the anti-trust front and do more to stop giant megacorporations from being created in the first place, which is how these giant fortunes were built in the first place.

Easiest way to fix the IRS is simply make the tax returns of the superrich and big corporations public. https://t.co/zQoQ6HjxlW