Left and right should stop demonizing people they don’t understand 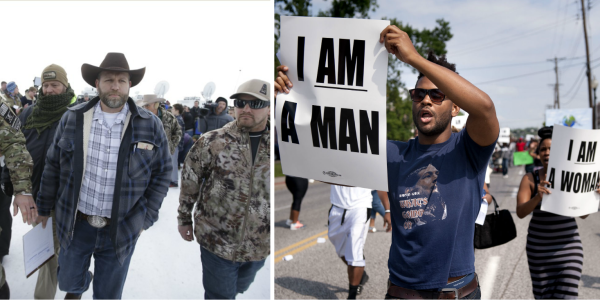 Peruse your Facebook or Twitter feed over the last couple of days and you’ll probably find a liberal friend or two snickering about “#YallQaeda.”

Dig a little deeper and you’ll even find people muttering about domestic terrorism, sedition, and the need to use brutal force to crush the occupation of a tiny building on a remote wildlife preserve by armed protesters.

Think that’s ridiculous and over the top? Before liberals were eagerly attacking the small band of armed men holed up in a federal building in Oregon, it wasn’t that long ago that some conservatives were calling demonstrators in Ferguson terrorists who might even be in league with ISIS.

What’s up with this? Are armed militias and ISIS-inspired rioters coming to get us? Or is a polarized America getting distracted by the fringes of legitimate movements and losing sight of the big picture?

Irresponsible demonization of one’s perceived opponents on the other side of the red state vs. blue state dichotomy is a hallmark of contemporary American political and cultural discourse.

It’s also getting really old. Isn’t it about time we moved beyond it?

Maybe it’s time to step outside of our cultural and political bubbles, listen to the grievances of people from backgrounds different than ours, and figure out what areas of unity might exist?

Don’t know any rural ranchers? Then don’t rush to judgment about them and pontificate about “something something white privilege – what could they possibly have to complain about?”

Don’t know any poor young African Americans in the inner city? Then don’t rush to judgment and condemn them as criminals who hate the police for no reason.

If you think the Oregon protesters at Malheur National Wildlife Refuge are patriots and heroes but also think people protesting against police brutality in urban areas are thugs (and even more blunt terms) you might be part of the problem.

Likewise, if you think the Oregon protesters are domestic terrorists, mock them as rednecks, and call for them to be violently suppressed, but also grandstand about needing to understand the grievances of urban rioters and looters (whose violence you would never think to describe as terrorism) you also might be part of the problem.

If my equating the two makes you feel offended and in need of a safe space where you can clutch your pearls, you are definitely part of the problem.

State oppression comes in many forms. Some are more readily recognizable from within one cultural framework or ideological bubble than from another. What are the biases that make the right more afraid of urban protesters than rural armed militias who talk about overthrowing the government? What are the biases that make the left more disturbed by people with guns than people who burn down and loot businesses?

This isn’t about whether an armed occupation of an empty visitor’s center on a wildlife refuge or burning and looting a store are smart or justifiable tactics. It’s about understanding the differences in your instinctive reactions to each and recognizing the statism that we all face instead of targeting each other.

The Oregon ranchers were victims of outrageous mandatory minimum sentencing — just like many people in our cities who are swept up by the unjust war on drugs.

Why not take this moment to step outside our cultural bubbles, reach beyond the left-right false dichotomy, and work to end the mandatory minimums that oppress ranchers and urban youth alike?

For once, let’s target the forms of statism that we all have in common instead of attacking each other.

Do those commonalities mean we have duplicate experiences? Of course not. On the urban side, impoverished minorities have long borne the brunt of mandatory minimums in the drug war. On the Oregon rancher side of the issue, the use of mandatory minimums under a federal terrorism statute over a fire dispute adds a new, more frightening dimension to the topic.

Those are specific experiences that we should be learning from, processing, and engaging in dialogue over so we can forge alliances that can end these injustices.

We can all have tunnel vision. All the more reason to reach outside of our comfort zone, build connections with new people, and turn those connections into coalitions that have a chance to win.

An issue like mandatory minimum sentencing, where the overreach of the state is clear from the most densely populated city to the most remote ranchland, is a good place to start.

Andrew Walker lives in Los Angeles and is a doctoral candidate in psychology.

Left and right should stop demonizing people they don’t understand