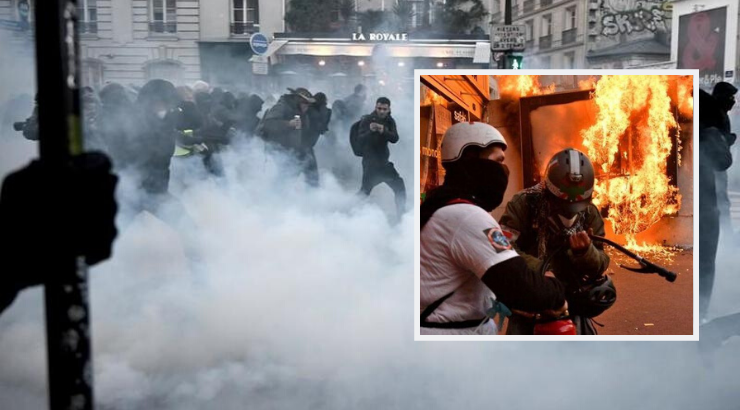 French President Emmanuel Macron has scrapped plans to raise the retirement age from 62 to 64, as tens of thousands of anti-government activists – many donning yellow vests – returned to the streets of Paris and elsewhere on Saturday to protest the proposed pension reforms, according to the New York Times.

The mood was militant, and the more violent demonstrators once again clashed with the police, even as they sowed a trail of damage through eastern Paris. A bank branch was sacked, and bus shelters smashed and fires set. Unions said 150,000 protesters were in the streets of Paris on Saturday. –NYT

Saturday’s demonstrations included exchanges between rock-throwing protesters and the police, who used tear gas, water cannons and other crowd control measures as the day wore on. At one point a building was set on fire.

The government of France plays a major role in retirement pensions – both providing and guaranteeing funds and overseeing the entire system.

The bid to boost the retirement age infuriated moderate unions Macron relies on, despite his insistence that French citizens need to work longer in order to keep the pension system – which may be facing a $19 billion deficit – financially sound.

In a Saturday letter from Prime Minister Edouard Philippe, the Macron administration said that it would “withdraw” the new age limit, and postpone major decisions on how to keep the system solvent until it can better assess the situation “between now and the end of April.”

Macron described it as a “constructive compromise,” which French union CFDT applauded. The CGT union called the measure “a smokescreen,” however, which protesters agreed with as they took to the streets on Saturday.

“You introduce something that’s unacceptable, and then you withdraw it,” she said, adding “Nothing justifies this reform.”

Mr. Macron has insisted that his retirement plan represents a fair, rational response to the new world of work, where careers are interrupted and French citizens no longer stay in the same job for life.

The plan would replace the current system of 42 different pension regimes, most tailored to match individual professions, with a single, points-based system that will be the same for everybody. Workers would accumulate points, then cash them in at the end. Bus drivers in Toulouse would get the same retirement benefits as those in Paris — not now the case, as the Paris system has some of the country’s most generous benefits. –NYT

As the New York Times notes, “the government’s concession is unlikely to end either the strike or the demonstrations,” as “The more militant unions — and the ones most heavily represented in the railways and the Paris subway — are demanding that Mr. Macron abandon his entire reform plan.”

“We’ve got to continue to mobilize, until they pull the whole plan, pure and simple,” said French Parliamentarian Eric Coquerel from the far-left France Unbowed Party.