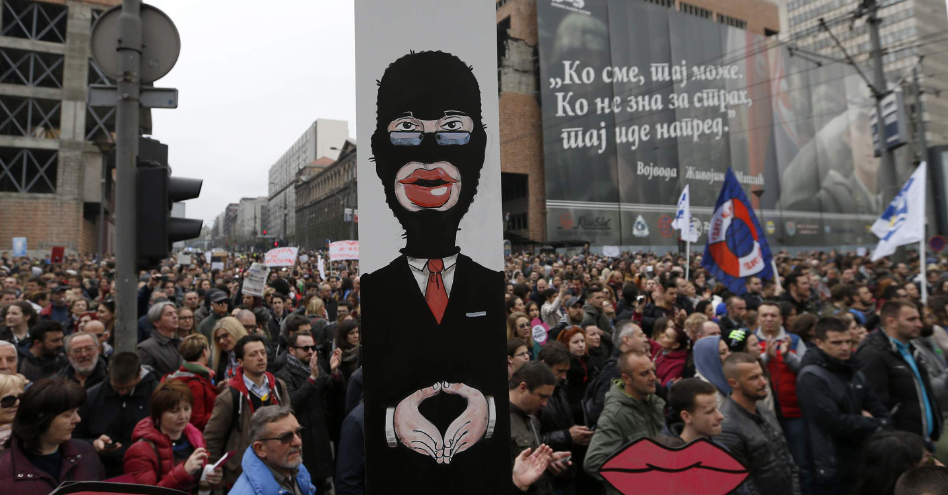 The media has been silent as massive Serbian protests have broken out against the electoral corruption of its newly elected Prime Minister, Aleksandar Vucic. Thousands took to the streets to express their outrage over Aleksandar’s election.

Video on Twitter showed thousands of people in the streets of Serbia in more than a dozen cities/towns. The protests have been ongoing for the last ten days now showing no signs of stopping.

URGENT | Traffic in #Belgrade where thousands protest against election irregularities is stopped pic.twitter.com/0k7617BLFp

Protesters included police and military unions according to Danas.

“The times when politicians would turn the army and police against its people are over. The army, the police, and the people are in one place today,” Veljko Mijailovic, the head of the police union, told the crowd.

According to a loose translation of the Serbian news agency:

Protesters chanted “Vucic, thieves” and “stole the election” “You’re not our president” and “We will not Ceca to the Minister.” Students held up signs that read “Stop the dictatorship,” “Take responsibility, not a sandwich”, “Freedom of the media”, “Vucic is not my president”, “Down with dictatorship.”

The country is rife with allegations of election fraud. Vucic asked the Republic Electoral Commission to re-count the ballots from the presidential election  in front of cameras for the public to see.

An electoral Staff member, Sasa Jankovic, is being accused of potentially stealing 319,000 votes, although he has denied the allegations and said that it was ” notorious nonsense”, adding that he had not stolen anything.

Vucic has also denied the allegations questioning the Serbian government about its accused fraud.

However, election officials have discovered serious irregularities at more than 25 polling stations.

The election headquarters of Sasa Jankovic has announced criminal charges against unknown persons and all members of committees at several polling stations where those irregularities were found.

Meanwhile, in Sjenica officials have found some ballots to have falsified signatures and some ballots cast by people who have been deceased for years.

Pro-Russia Serbian Prime Minister Aleksandar Vucic, 47, won the election last Sunday, April 2nd, with a decisive 55% of the vote against his two rival candidates who received 16% and 9% in an election that many believe was corrupt. This gives his populist Serbian Progressive Party control of both the executive and legislative branches of the Serbian government DW.com reported.

The 9% was earned by Luka Maksimovic, a media student who ran as a satirical candidate to mock the corruption in the election.

Vucic has repeatedly said he will not alter the former Yugoslav republic’s geopolitical balance between the European Union, which Serbia seeks to join, and Russia, with which Serbs share their Orthodox Christian faith and Slavic heritage, Reuters reported.

He thanked German Chancellor Angela Merkel and Russian President Vladimir Putin, both of whom he met during the election campaign. Putin endorsed Vucic the day before the election wishing him good luck.

“For me it is important this election demonstrated that a large majority of Serbian citizens favors the continuation of the European path while maintaining close ties with China and Russia,” Vucic told his cheering supporters.

He has recently moved closer to Russia on military and economic cooperation.

Reuters called him conservative but then added, Vucic “is expected to retain de facto power through his control of Serbia’s ruling Progressive Party.”

Vucic is expected to use the presidency to appoint a cipher successor as prime minister and to transform the presidency into a more powerful position to consolidate his power, Radio Free Europe warned.

Protesters have called for the government, along with top officials from the public broadcasters RTS and RTV, the Central Election Commission, and the regulatory Authority for Electronic Media, to step down and resign.

“We are here to demand more democracy, an end to Vucic’s dictatorial regime and a better future, more jobs and a better education system,” said Djordje Peric, 21, according to Reuters.

This is Belgrade in Serbia [shows photo of protesters above]. A country where young people are leaving because there are no jobs. No future. Corruption is extremely high. People are being called at home to vote for a corrupt president. Votes are being bought. Dead people voted. People that live abrought voted. Television belongs to the state. People live on an avarage of €300 a month. Need a loan from the bank to fix the car, if they already own a car.
People are sick of it! They go outside and protest!

It’s not just the election outcome we’re unhappy about. We’re unhappy, unemployed, poor, hungry. Anyone who doesn’t have access to the internet (which is a fucktone of people) is brainwashed by the controlled media. Thousands of people go on the streets to try and grab attention, and still half the country has no idea the protests are going on. In the media they call us “a handfull of drunk hooligans”, while the other day more than 10.000 young people, parents and even some grandparents marched for hours. We’re marching every day starting 6pm, and I can only hope we change at least a tiny bit of this shitty situation we’re in.