Merck’s new ‘not Ivermectin’ Covid-19 treatment, molnupiravir, costs $17.74 to produce – yet the company is charging the US government $712 for the treatment – a 40x markup, according to The Intercept, citing a report issued last week by the Harvard School of Public Health and King’s College Hospital in London.

The pill, originally developed using US government funds as a possible treatment for Venezuelan equine encephalitis, cut the risk of hospitalization and death in half in a randomized trial of 775 adults with mild/moderate Covid who were considered at high risk for disease due to comorbidities such as obesity, diabetes and heart disease. The trial was stopped early so the company could apply for and emergency use authorization (EUA). The drug did not benefit patients who were already hospitalized with severe disease.

News of the oral ‘wonder drug’ sent shares of Merck higher last week, as the company says it can deliver 10MM doses by the end of the year.

Clearly, the pill could bring in massive profits to Merck and its partner on the drug, Ridgeback Biotherapeutics – which licensed the drug from Emory University in 2020 and then sold the worldwide rights to the drug to Merck for a sum which has not been disclosed.

Meanwhile, the Defense Threat Reduction Agency, a division of the Department of Defense, funded development of the drug by Emory University to the tune of $10 million between 2013 and 2015, according to nonprofit group Knowledge Ecology International discovered.

DTRA-JSTO, under the CBDP, invested in a broad-spectrum #antiviral, leading to the discovery of molnupiravir through collaborative research with @Merck, @EmoryUniversity, #RidgebackBio, & @NIH.

Yet, as Quartz points out, only Merck and Ridgeback will profit from the new antiviral – which they say “could be one of the most lucrative drugs ever,” bringing in as much as $7 billion by the end of this year alone.

Despite its initial investment, the U.S. government seems to be facing a steep markup in prices. In June, the government signed a $1.2 billion contract with Merck to supply 1.7 million courses of the medication at the $712 price. The transaction is due to take place as soon as molnupiravir receives emergency use authorization from the Food and Drug Administration.

Good government advocates are pointing out that because federal agencies spent at least $29 million on the drug’s development, the government has the obligation to ensure that the medicine is affordable. “The public funded this drug, and therefore the public has some rights, including the rights you have it available under reasonable terms,” said Luis Gil Abinader, senior researcher at Knowledge Ecology International. -The Intercept

Ridgeback co-founder Wendy Holman told CNBC in an interview last week that they asked for, but “never got government funding” for the manufacture of molnupiravir. The company also claimed in a press release touting the study that “since licensed by Ridgeback, all funds used for the development of molnupiravir have been provided by Merck and by Wayne and Wendy Holman of Ridgeback.”

Critics, meanwhile, say the $700+ price point is absurd – with health advocates concerned that people some countries will not be able to afford the new drug.

“Offering someone a $700 treatment when they don’t yet feel that ill is going to mean that a lot of people are not going to take it,” said King’s College Hospital physician Dzintars Gotham, co-author of the report – which suggests that Merck would still reap a 10% profit margin if they priced molnupiravir at $19.99.

Barber and Gotham acknowledge that the $17.74 cost of producing a five-day course of the antiviral pills is an estimate but said that the algorithm they used, and have employed to estimate the production costs for hundreds of drugs, tends to result in overestimates in the long run.

Meanwhile, the prices that private companies charge for drugs tend to go up rather than down. “For all these deals that have happened for therapeutics or vaccines, the price has only increased as uncertainty has decreased,” she said. “One price is given and then, for the next sale, the price goes up. The price went up for other drugs and vaccines, so I would be very surprised if this price didn’t go up, too.” -The Intercept

If only there were another option for mild-moderate Covid-19 cases that was inexpensive and used around the world for decades with an extremely positive drug safety profile.

We’re just going to leave this here (as we noted last month):

Widely prescribed anti-parasitic Ivermectin (also made by Merck) has shown massive efficacy worldwide in the treatment of mild and moderate cases of Covid-19, plus as a prophylactic. India’s Uttar Pradesh province, with a population of over 200 million, says that widespread early use of Ivermectin ‘helped keep positivity [and] deaths low.’

Separately, there have been several studies funded by the Indian government, primarily conducted through their largest govt. public medical university (AIIMS).

Conclusion: Two-dose ivermectin prophylaxis at a dose of 300 ?g/kg with a gap of 72 hours was associated with a 73% reduction of SARS-CoV-2 infection among healthcare workers for the following month.

Conclusion: There was no difference in the primary outcome i.e. negative RT-PCR status on day 6 of admission with the use of ivermectin. However, a significantly higher proportion of patients were discharged alive from the hospital when they received ivermectin. 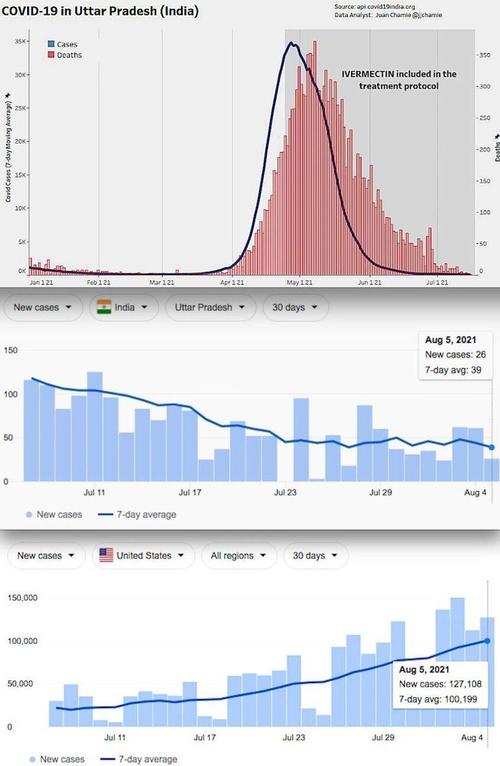 Here are more human studies from other countries on the ‘horse dewormer’:
Peru:

Findings: Patients in the ivermectin group recovered earlier from hyposmia/anosmia (76 vs 158 patient-days; p < 0.001).

Conclusion: According  to  our  study,  the  Ivermectin-Doxycycline combination therapy has better symptomatic relief, shortened recovery duration, fewer adverse effects, and superior patient compliance compared to the Hydroxychloroquine-Azithromycin combination. Based on this  study’s  outcomes,  the  Ivermectin-Doxycycline  combination  is  a  superior  choice  for  treating  patients  with  mild to moderate COVID-19 disease.

Discussion: A 5-day course of ivermectin resulted in an earlier clearance of the virus compared to placebo (p = 0.005), thus indicating that early intervention with this agent may limit viral replication within the host. In the 5-day ivermectin group, there was a significant drop in CRP and LDH by day 7, which are indicators of disease severity.

Meanwhile, There are currently 76 ongoing or completed clinical trials on Ivermectin around the world. Below are the results of 32 which have been completed. One can visit ivermeta.com and dig down on any of these / read the entire study. The site recommends Ivermectin in conjunction with vaccines to confer the best protection against Covid-19, however we’ll leave that to you and your doctor to discuss. 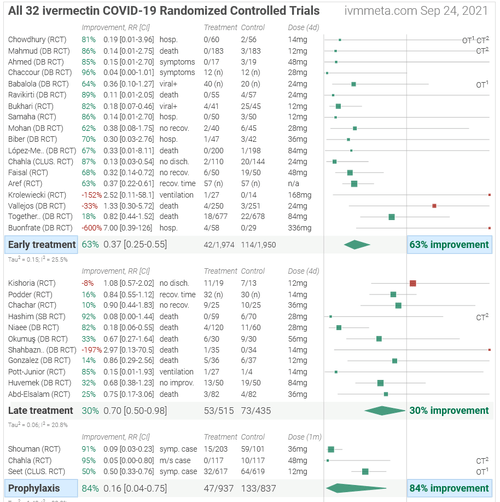 Perhaps those who can’t pony up $700 will seek other options.