As Infections Plunge Across America, “Models” Are Once Again Warning of Imminent Deathmageddon

Across the US and much of the developed world, deaths attributed to COVID have plunged since the arrival of the omicron variant, which is notably far more mild than previous strains. 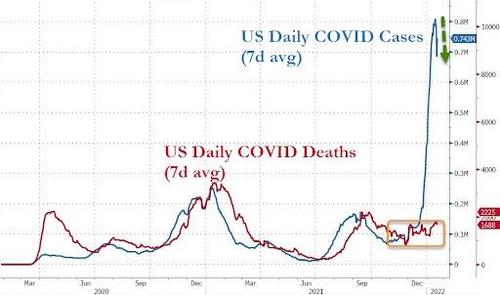 Yet this dramatic decline in deaths vs. cases isn’t stopping the scientists who produce COVID “models” – which, keep in mind, have been consistently wrong since the start of the pandemic – from producing even more alarmist forecasts.

‘The Science’ (this time courtesy of Pennsylvania State University) is basing their models on the fact that Covid mortality has been trending slightly upward since November. In that time, the 7-day rolling average for daily new COVID deaths in the US reached nearly 1,700 on Jan. 17, still below the peak of 3,300 in January 2021.

According to Katriona Shea of Pennsylvania State University, who helps to lead a team that compiles several pandemic models and shares the projections with the White House, deaths in the US could eclipse the 1 million threshold by the end of March (they currently stand at 854,000 – and of course includes those who died with Covid as opposed to from it). In short, the forecasters are projecting anywhere between 50K and 300K deaths between now and then. Yet, the current COVID wave, which may have already peaked, is expected to conclude in March, when warmer weather is expected to arrive across North America.

Adding to the fear mongery, AP also pointed out in a recent story that COVID deaths among nursing home residents have started to climb slightly (although the current rate is 10x less than the January peak from last year).

But while the worst-case forecasts are calling for a rise in daily mortality numbers, a quick look at the numbers out of South Africa (which is believed to be further along in its omicron-driven wave than the rest of the world since that’s where the variant was first discovered) show that deaths are sharply declining – catching up to a more pronounced drop off in cases. 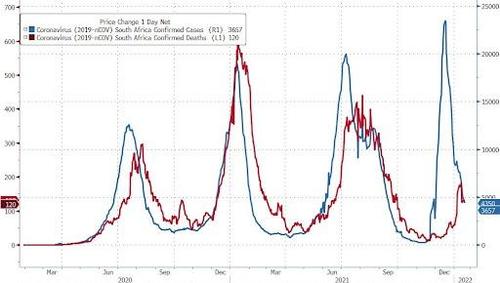 To that end, as the Epoch Times reports, the number of COVID cases is falling in 34 US states, “stoking optimism that the omicron-fueled wave is subsiding.” New York, Florida and California are included in the 34. Other states in this category include Alabama, Delaware, Louisiana, Georgia, Nevada, North Dakota, Oregon and Pennsylvania.

Cases in New York (one of the most closely watched states) have fallen significantly from their peak above 90K from Jan. 7. Daily case numbers dropped to just 26K on Monday, while hospitalizations have fallen across the northeast.

But while academic fearmongers are trying to turn the COVID ‘FUD’ dial back to ’11’, Americans should probably be more concerned about rising non-COVID deaths in the 18 to 49 age group, something that has been driven by an increase in suicides and drug overdoses since the start of the pandemic. An analysis by the Epoch Times showed that deaths in this age group increased by 40% in the 12 months ending in October 2021.

The Epoch Times has repeatedly asked both the White House and the CDC about any steps they’re taking to address this, but they have yet to respond. What’s more, researchers from Stanford University’s Meta-Research Innovation Center have found that the number of COVID-caused deaths from 2020 might actually be lower than previously believed.

Not everyone gets infected with SARS-CoV-2 in a given season. Updated study shows the likelihood of dying with Covid if infected is even lower than earlier estimates.
July study: https://t.co/KcWWziX5Lr
Dec study:https://t.co/HxPGkNwdSJ
Prof Ioannidis of @Stanford pic.twitter.com/hR1RJwPhtl

It’s something to keep in mind when the “authorities” are pressuring everyone to get that fourth COVID jab a few months from now, even as life around the world starts to go “back to normal”.