Prince Andrew, who is currently under suspicion of being involved in Jeffrey Epstein’s child trafficking network, sent pizza, and other food to human trafficking victims through a charity called Azalea.

The charity says that it works to help “those trapped in sexual exploitation, supporting them to build new lives away from violence and poverty.”

Royal editor Omid Scobie posted about the strange charitable donation in a Tweet last month, saying that Prince Andrew was “volunteering while no longer working as a royal.”

While no longer a working royal, Andrew has been volunteering during the Covid-19 pandemic alongside ex-wife Sarah Ferguson. The couple recently sent pizza, dates and meals to an org helping those who have been trafficked or trapped in sexual exploitation.https://t.co/SRr3e6pTvL

He also retweeted a collage of images from the Azalea charity thanking Prince Andrew and Sarah Ferguson for their donation. The photos included a pile of Domino’s pizza boxes and a box of dates with Prince Andrew’s name and address on it. The tweet was since deleted by the Azalea charity, but can be seen below. 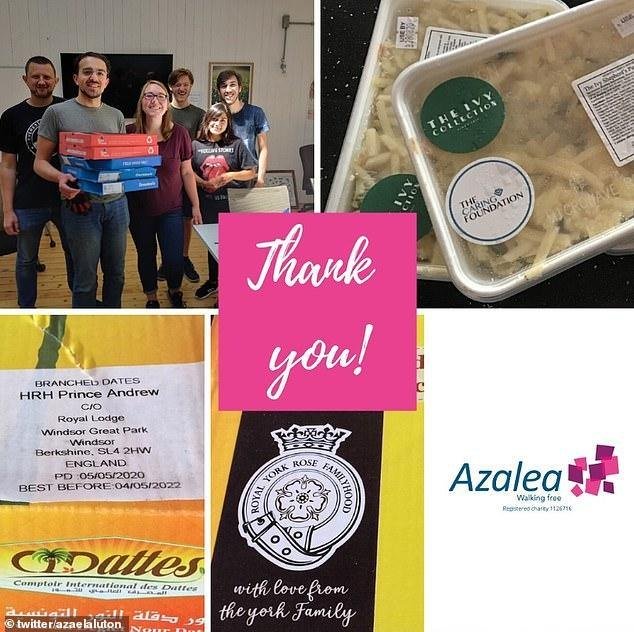 Meanwhile, Prince Andrew has been dodging investigators that want to question him about his own involvement in human trafficking, and his decision to send pizza and snacks to an unknown charity during this time of scandal was described as tone-deaf by some online commenters.

This is a man who comes from one of the most wealthy families in the world, who is wanted for questioning in a high profile human trafficking case, and the best that he can do is a pizza party for an obscure charity that may have cost him around $100.

FOX Business estimates that the prince’s net worth is at least $45 million, and that estimate is likely conservative considering that the royal family is believed to have a great deal of wealth “off the books.”

New York prosecutors have said that the prince has “completely shut the door” on cooperating with authorities. They are now considering what further legal action can be taken.

Andrew continues to deny any wrongdoing or knowledge of Epstein’s many crimes, despite a growing body of evidence indicating that he was involved.

Manhattan Attorney Geoffrey Berman described the prince as a “co-conspirator.”

“Contrary to Prince Andrew’s very public offer to cooperate with our investigation into Epstein’s co-conspirators, an offer that was conveyed via press release, Prince Andrew has now completely shut the door on voluntary cooperation and our office is considering its options,” Berman said, according to the Guardian.

Andrew has previously promised to help investigators with the case, but has since removed himself from public life. He has also refused requests for interviews that investigators have sent him. He has stepped down from his official royal position and is now more than ever the black sheep of the royal family.

At his daughter’s wedding this past weekend, which was initially delayed over the scandal, Andrew was in attendance but was not allowed to appear in any of the photos.

After the arrest of alleged Epstein co-conspirator Ghislaine Maxwell, who is also said to be good friends with Andrew, the prince has canceled all of his travels and business trips outside of the UK, likely out of fears that he will be arrested as well.

Republished from TheMindUnleashed.com with permission