Robert Kennedy Jr, “Trump Has A $2 Million Stake In The Illegal Dakota Pipeline” 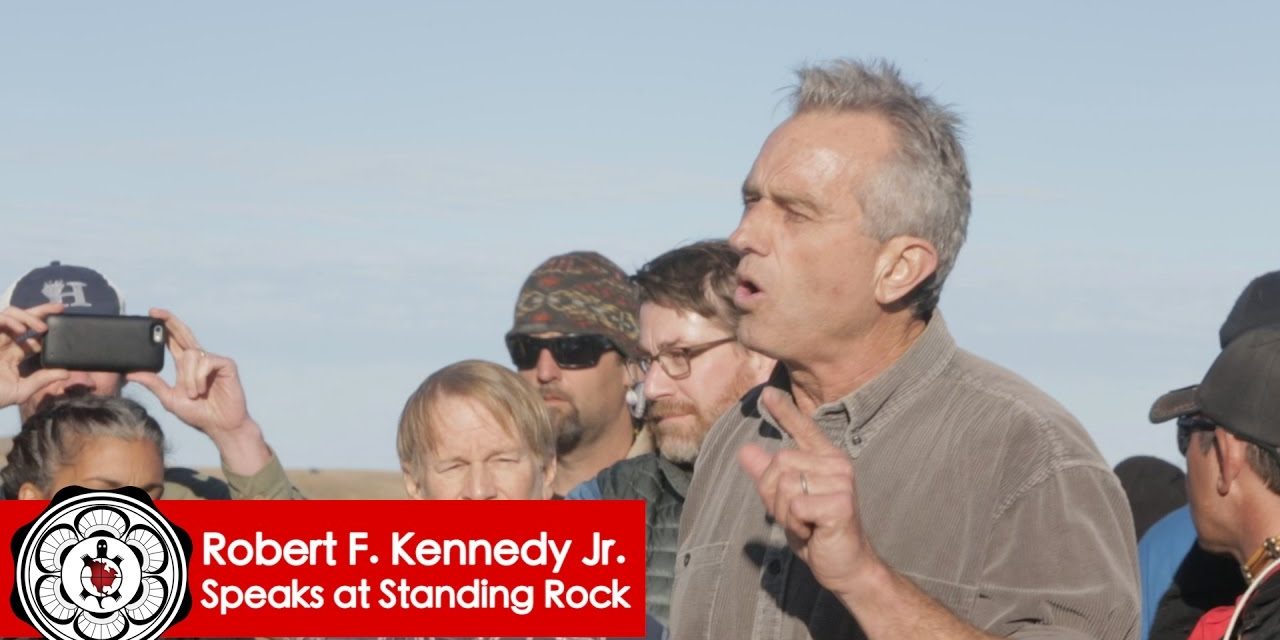 In an interview with Russia Today, Robert Kennedy jr. told Thom Hartmann of the Big Picture that Donald Trump has a $2 Million dollar stake in the Dakota pipeline and that the the company involved in the pipeline is breaking the law. 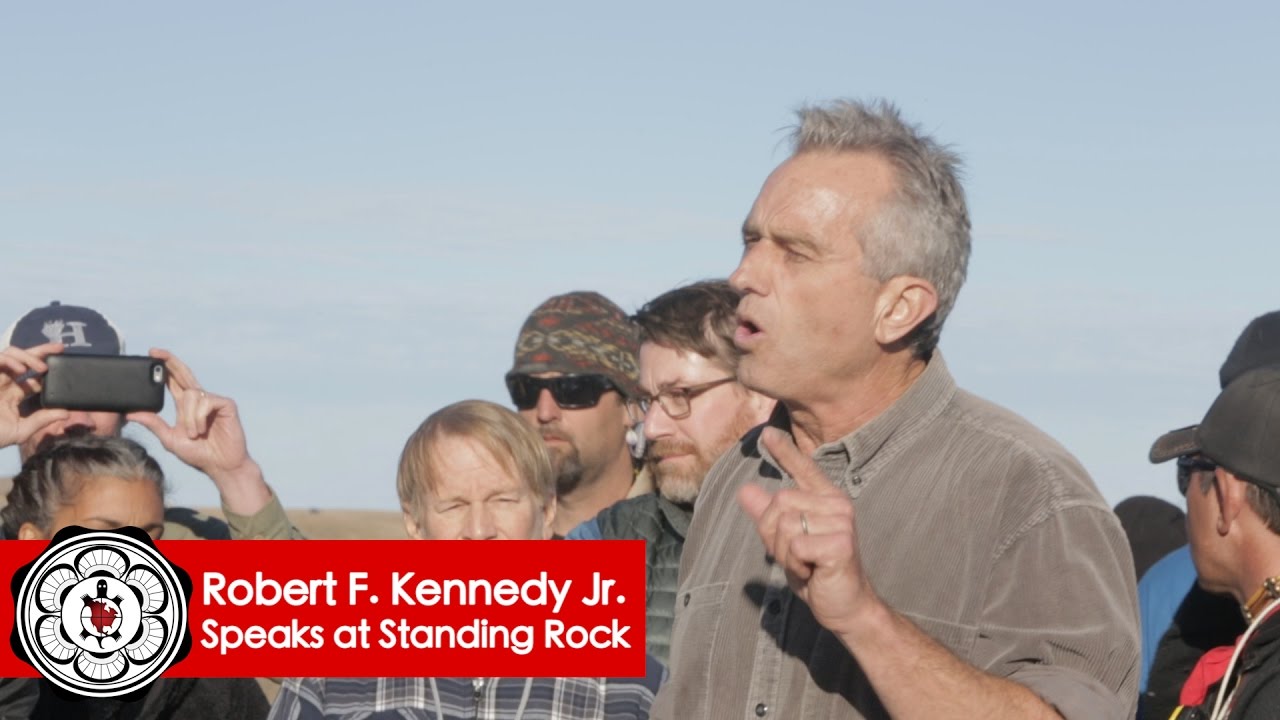 Kennedy went on to state that Donald Trump has already said that he will get a “permit for this pipeline and will jump start the Keystone XL pipeline and any other pipelines in the country.”

He then expanded and said that the company Energy Transfer Partners  behind the pipeline project that standing rock protesters are protesting is not only breaking the law by having armed guards assault peaceful protesters but they are breaking the law due to it’s abhorrent disregard for contracts and native sacred grounds.

Kennedy went on to state, “that the law requires that Energy Transfer Partners do a full environmental impact statement when working on such a large project which Kennedy further stated the pipeline was 1,700 miles, only 7 miles shorter then the Keystone XL pipeline. And that Energy Transfer Partners was using a loophole by segmenting the project so they didn’t have to do an Environmental Impact Statement or EIS. Although, Kennedy said that this was in violation of a National Environmental Policy Act or NEPA provision that says “you can not segment if you are going to do a big project you have to look at the whole project you can’t pretend it’s a bunch of little projects with no environmental impact.”

“There is a provision in the National Environmental Policy Act, our first environmental law and our most important environmental law and that’s the law that requires people before they get a federal permit, that’s going to diminish the value or change the use of federal land or the commons publicly owned resource. At first they do a cost benefit analysis which is called an environmental impact statement. When congress passed that law, there was an objection that said you have to get a federal permit to put a new piling on a dock. Do we really want people to have to go through a full environmental impact statement process with hearings and comments and all this just to replace an old piling on the dock? So congress and subsequently the EPA created a special permit called nationwide permit 17 , nationwide permit 12 is the ones these guys are using. Nationwide 12 says if the project is under 1 acre and it’s going to have no significant environmental impact you can get a short form EIS. Which allows you to essentially to fill out a form then put in the piling well this company invoked Nationwide permit 12 with this 1,700 mile pipe. What they are trying to get away with is illegal under the act and the way they did is segmented the pipe they made it into lots of little pipes instead of one long pipe and said we are just going to get nationwide permit 12 for each of these little sections. But NEPA actually has a provision that says you can not segment if you are going to do a big project you have to look at the whole project you can’t pretend it’s a bunch of little projects with no environmental impact. This project is huge it’s 1700 miles only less then 7 miles less then the XL pipeline and the XL got a full environmental statement.”

Kennedy continued his sophisticated rant listing the environmental affects that the Dakota pipeline would have on the ecosystem including – “carbon pollution, the fact that the pipeline would cross two hundred nine streams and there’s all sorts of other problems culturally with building on Indian reservation burial grounds,” he, said. Later adding, that “it was a violation of the Treaty of Fort Laramie building on their sacred land that was rightfully theirs.”

He further stated that it was Energy Transfer Partners breaking the law and not the protesters “On one side you have people exercising their right to protest and are doing it peacefully without breaking any laws on the other side you have a law breaking corporation that is shamelessly and openly breaking  the law,” Kennedy, said.

In a concluding argument Kennedy said the real reason that Energy Transfer Partners doesn’t want to do a full environmental impact statement is that the oil from the pipeline isn’t going to America it’s being exported to China, because they can’t sell it here without doing an EIS. “what this project is going to do is enrich a few Billionaires like Donald Trump while impoverishing the rest of the country injuring humanity profoundly,” he, said. Ending with a solution to kill the pipeline, Kenndy said “Obama should force the core of engineers and Energy Transfer Partners, to obey the law and do a full environmental statement if that was done he said this project wouldn’t exist.”

Just this year alone there have been 220 significant pipeline spills that have caused irreversible damage to the environment and the water supply. With more pipeline spills that have happened in recent past including the BP Gulf Oil Spill that destroyed ocean habitats and killed thousands of wildlife it’s also considered to be the worst oil spill in U.S. history. If that’s not enough another pipeline by shell leaked an additional 90,000 barrels of oil into the Gulf again in 2016.

So a project like the Keystone XL pipeline and the Dakota pipeline should be a no brainier do we really want to kill this world more then we already are and accelerate our doomsday scenario? The NSA and pentagon issued a joint statement calling climate change the biggest danger we face so why then are two of the most polluting carbon based projects not being stopped when they threaten our very existence i.e. our national security. And oh yeah that UN climate conference discussing implementing a plan to reduce carbon emissions these pipelines would more then double carbon emissions creating a mere 40-50 jobs at the consequence of utter environmental destruction. If Trump wants to make America great again he can start by devesting in a project that is going to kill us all and stopping it. #NoDAPL

So there is still  hope that Trump could stop this project that would be absolutely horrific for the environment and “Make America Great Again.”