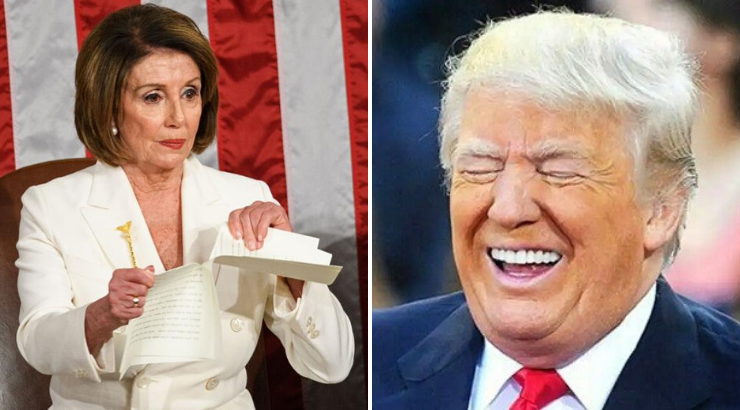 The latest Democratic Party attempt to remove President Trump from office—impeachment over Trump allegedly holding up an arms deal to Ukraine—flopped. Just like “Russiagate” and the Mueller investigation, and a number of other attempts to overturn the 2016 election.

We’ve had three years of accusations and investigations with untold millions of dollars spent in a never-ending Democratic Party effort to remove President Trump from office.

Why do the Democrats keep swinging and missing at Trump? They can’t make a good case for abuse of power because they don’t really oppose Trump’s most egregious abuses of power. Congress, with a few exceptions, strongly supports the President flouting the Constitution when it comes to overseas aggression and shoveling more money into the military-industrial complex.

In April, 2018, President Trump fired 100 Tomahawk missiles into Syria allegedly as punishment for a Syrian government chemical attack in Douma. Though the US was not under imminent threat of attack from Syria, Trump didn’t wait for a Congressional declaration of war on Syria or even an authorization for a missile strike. In fact, he didn’t even wait for an investigation of the event to find out what actually happened! He just decided to send a hundred missiles—at a cost of hundreds of millions of dollars—into Syria.

We are now finding out from whistleblowers on the UN team that investigated the alleged attack that the report blaming the Syrian government was falsified and that the whole “attack” was nothing but a false flag operation.

Is such unauthorized aggression against a country with which we are not at war not worth investigating as a potential “high crime” or “misdemeanor”?

Last month, President Trump authorized the assassination of a top Iranian General, Qassim Soleimani, and a top Iraqi military officer inside Iraqi territory while Soleimani was on a diplomatic mission. Trump and his Administration tried to claim that the attack was essential because of an “imminent threat” of a Soleimani attack on US troops in the region.

We found out shortly afterward that they lied about the “imminent threat.” The assassination was not “urgent” – it was planned back in June. Trump then claimed it didn’t matter whether there was an imminent threat: Soleimani was a bad guy so he deserved to be assassinated.

But the attack was an act of war on Iran without Congressional declaration or authorization for war. Is that not perhaps a “high crime” or “misdemeanor”?

We are finding out that, contrary to Trump claims, Soleimani was not even behind the December attack on US troops in Iraq. New evidence suggests it was actually an ISIS operation attempting to goad the US into moving against Iraq’s Shia militias.

Fantasies about Trump being an agent of Putin or trying to get Ukraine to help him win the election are presented as urgent reasons Trump must be removed from office. Real-life violations of the Constitution and reckless militarism that may get us embroiled in another Middle East war are shrugged off as “business as usual” by both Democrats and Republicans in Washington.

Democrats won’t move against Trump for what may be real “high crimes” and “misdemeanors” because they support his overseas aggression. They just wish they were the ones pulling the trigger.

Republished from RonPaulInstitute.org with permission