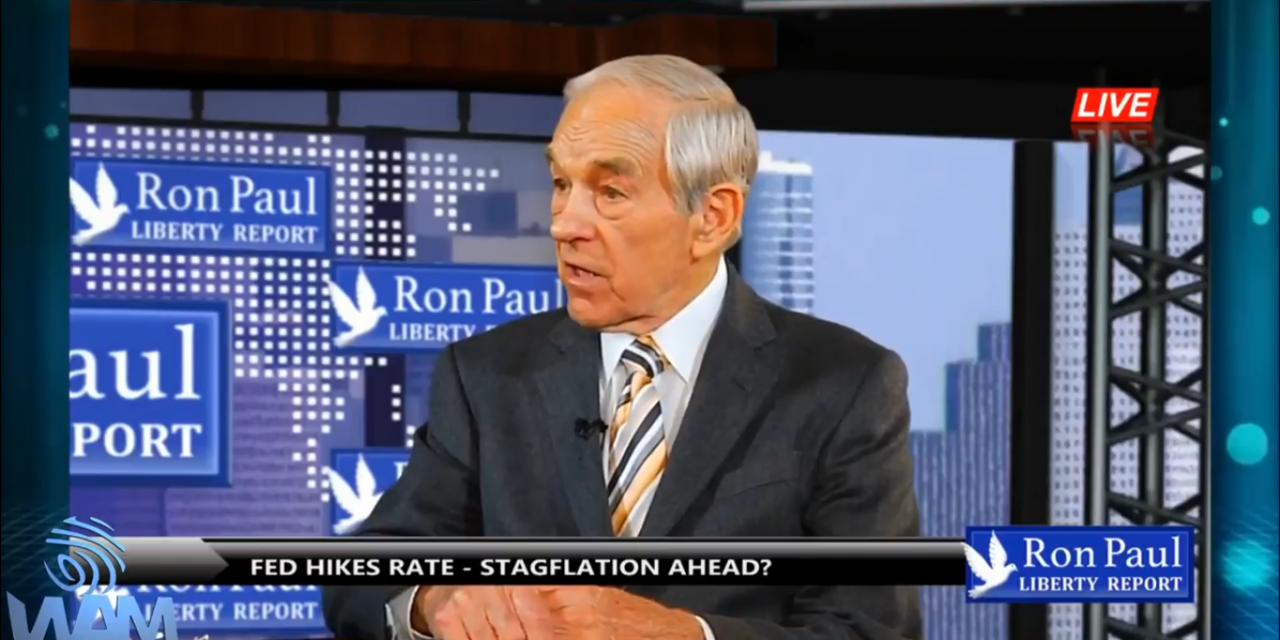 Recently, Dr. Ron Paul broke down his views on the recent interest rate hike at the Federal Reserve and the direction he believes we’re heading within the monetary system.

Dr. Paul made a familiar prediction, that we are headed towards stagflation, or an inflationary depression like we’ve never seen before.

Stagflation is defined as a high inflation rate teamed with high unemployment and low economic growth. When the government spends unthinkable amounts of money while the Federal Reserve prints currency out of thin air, devaluing the currency, creating debt and inflation, this is a sad inevitability.

Now, former Congressman Ron Paul has made these predictions in the past, but of course he did not put a date on it. The fact is, with the level of absolute manipulation of the markets and monetary system, economic fundamentals are off the table, making trends futile.

It’s seems inevitable but we can’t put a date on it. Just because Ron Paul has claimed it’s inevitable does not make him incorrect, it means he thinks forward unlike so many.

All fiat currency of the past has eventually reverted to its intrinsic value of zero, considering it’s based on faith or hot air rather than physical quantity or sound money.

John Sneisen and I dig deep into Ron Paul’s claims on the Ron Paul Liberty Report and look at some revealing charts including M2’s current trend as well as the M2 Velocity which has hit a historic low of about 1.48, a low which author and economic analyst John Sneisen explains in greater detail.

Dr. Paul also broke down the worrisome fact that in 11 years, interest rates have only been raised a couple of times, all combined to less than an entire point. Interest rates should certainly not be artificial but the notion that it hasn’t been raised in 11 years says a lot about the direction of the U.S. monetary system.

Of course Dr. Paul has made the point many times in the past that President Donald Trump cannot do anything to change the inevitable fall of the economy. It’s out of his hands and in the hands of the Federal Reserve, Treasury (which often acts outside the state) and global manipulators.

With the explanation of worthless currency coming from the Federal Reserve, Ron Paul also brought up the use of gold and silver for long term monetary insurance of individuals. Of course banks like Deutsche Bank, HSBC, BNP Paribas and the Bank of Nova Scotia have been caught red-handed in the past year manipulating the value of gold and silver for the ESF (Exchange Stabilization Fund), however once the system collapses, so do the chains connected to the artificial bear market in the precious metals industry.

That which is decentralized will stand far above that which is centrally planned. This will lead to a currency revolution. Perhaps we may even see competing currencies in the near future with the assumption of a free market and a free monetary system following the crash.

First, the populace must understand basic economics which is purposely complicated despite its simplicity. So education is key to a true financial revolution.