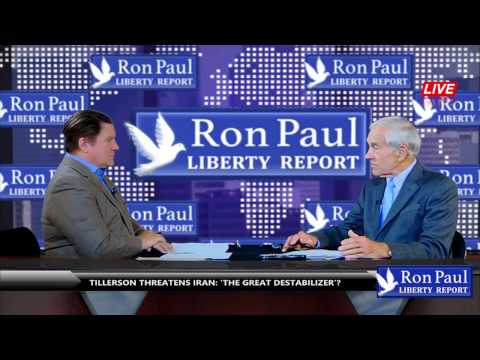 Article via RPI by Daniel McAdams

Secretary of State Rex Tillerson yesterday accused Iran of sending troops to fight in Syria and of destabilizing the region. He did not mention that Iranian troops were invited into the country while U.S. troops are in Syria illegally. Tillerson condemned Iran as a leading human rights abuser while praising Saudi Arabia — the kings of head-chopping — as a great U.S. ally.

The Secretary of State vowed that the U.S. would solve the Iran problem once and for all instead of leaving it to the next U.S. Administration.

Is Trump gunning for yet another major war in the Middle East?

Will U.S. allies follow Washington in new sanctions on Iran even as Trump has reluctantly admitted that Iran is living up to its end of the nuclear deal?

This and more in today’s Ron Paul Liberty Report:

This article first appeared on RonPaulInstitute.org and was authored by Daniel McAdams.