Scientist Want To Send Human DNA And Data Into Space 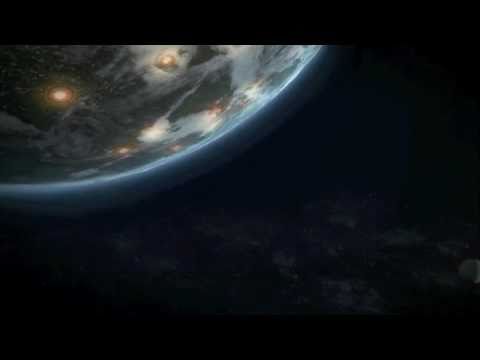 Humanity has a bleak and sometimes utterly destructive future ahead of it. With the wars we create and destroying the planet every day littering, destroying rain forest and other animals habitats and more. So what can be done to save the human race? Scientist have an idea and they want to send human DNA and Data into deep space to potentially continue on our painful legacy of destruction else where in the cosmos and for others to remember us. 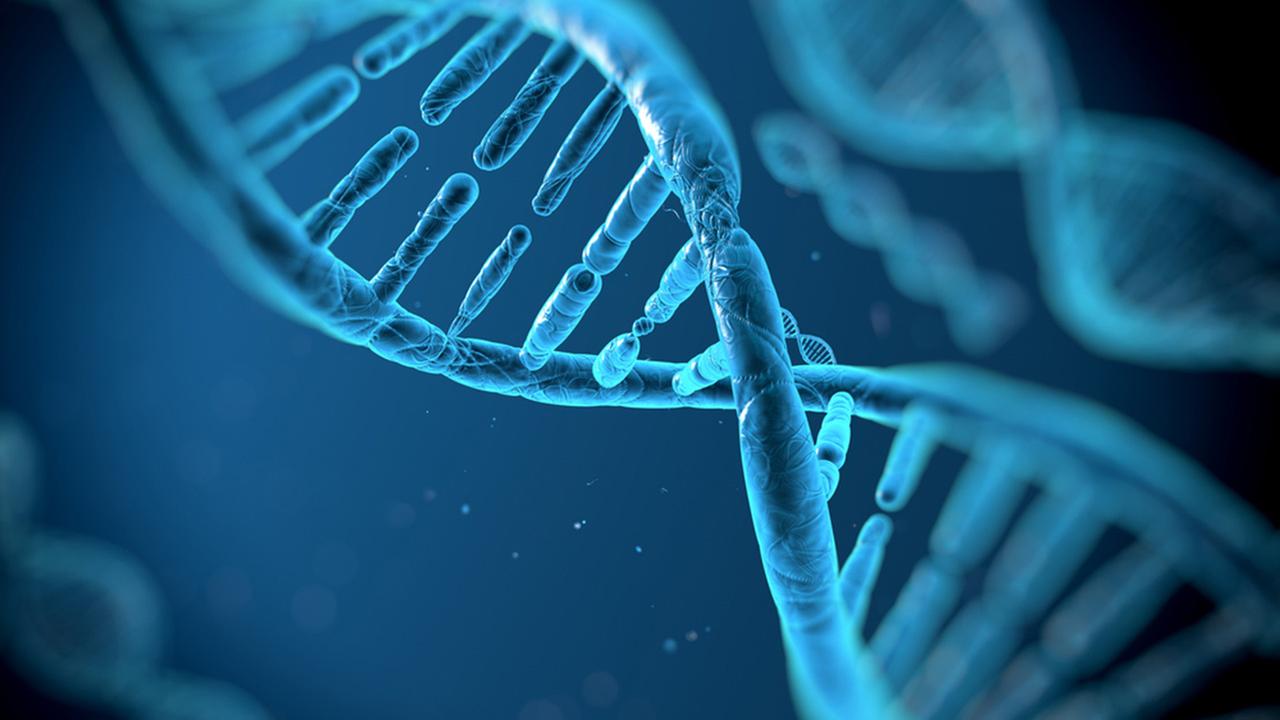 An absolute crazy idea or not has that ever stopped science?
No it hasn’t, With the growing list of likely habitable planets scientist may be looking for a new home for Earth’s citizens. With NASA finding 100 new planets just this week although mostly gas giants to add to it’s extensive list of 3,200 planets since May with 1,284 of those being recently discovered with potentially Eleven now that are habitable by human standards. Including two planets that were just recently discovered that could support life.

The total known planet count jumps to more than 3,200. Here they are by size.https://t.co/UgPRQTCEFw pic.twitter.com/XLDh9oYKjC

Although, scientist have said that 550 planets heave a rocky surface like Earth so there might be more then eleven habitable planets. When we consider our standards for finding alien life might be wrong as were looking for what can support human life and not
thinking outside of the box of what life forms could live under other conditions that we can’t due to our biological make up. Scientist have already hypothesized that 100 Billion planets may exist in what they deem the “habitable zones.” So the logical next step in human evolution is to begin to plan to colonize other potentially habitable planets.

550 of the new Kepler planets are small possibly rocky; 9 of those reside in habitable zone.https://t.co/UgPRQTCEFw pic.twitter.com/5cR1tNb190

1. Send human DNA into space to a habitable planet

2. Send watch probes to watch over new experiment of life.

4. Profit and watch the planet populate with little humans to destroy that planet next.

That’s just what a Kick-starter project called “Voices of Humanity” wants to do send human DNA and Data into space to continue on the human race. “Using a laser propelled spacecraft
Your data will live forever in the universe. You will be immortalized” according to the KickStarter page.

Essentially what they want to do in a step by step process is.

2. Raise $100,000 “build a sophisticated ground-based laser and robotic telescope that allows data to be optionally transmitted via laser to the target of your choice in space.” 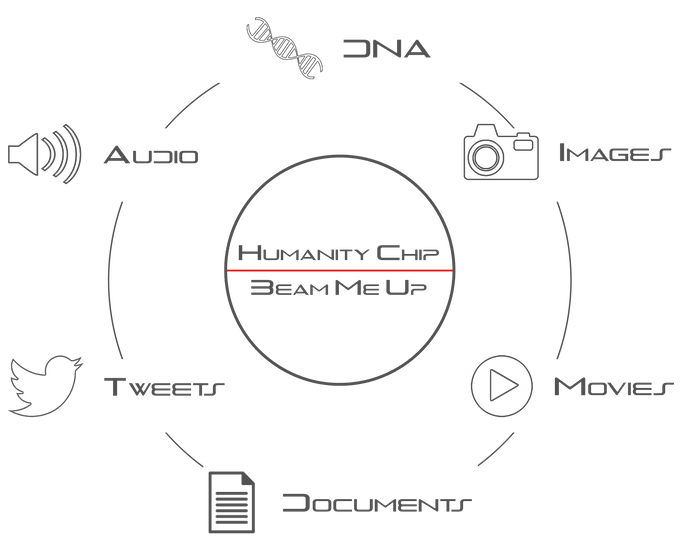 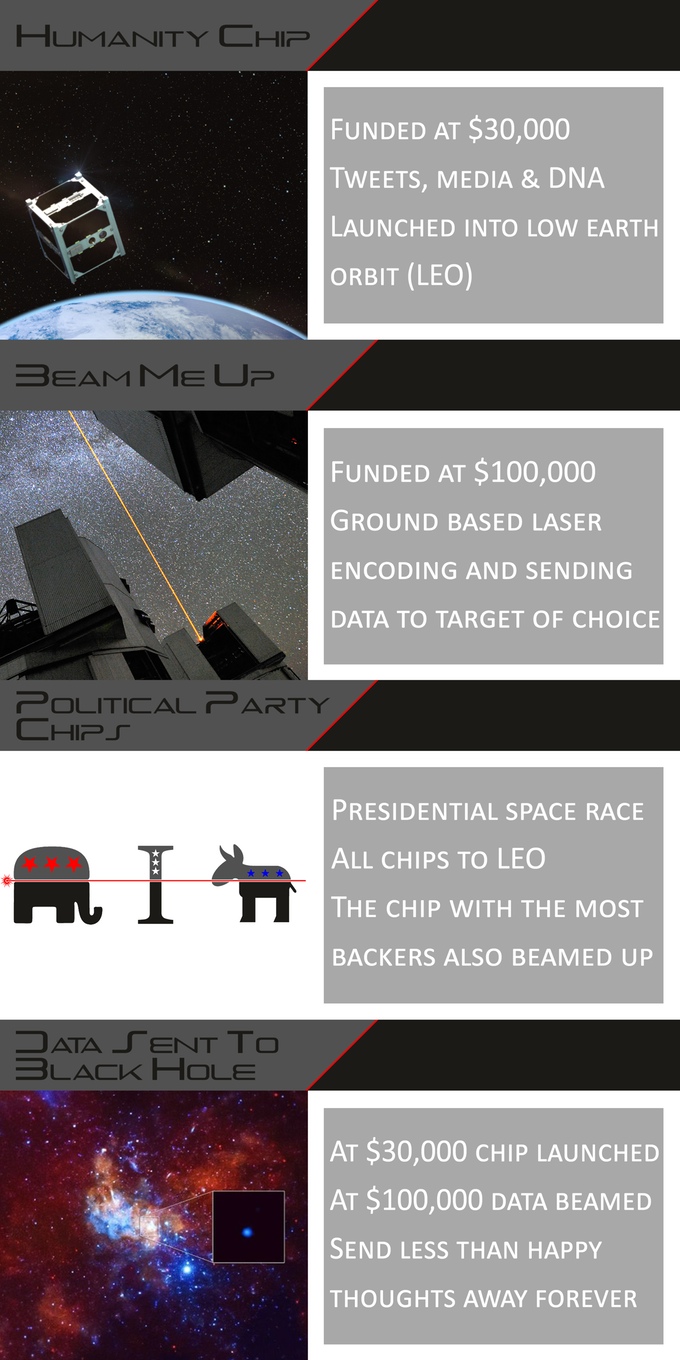 “We will be able to ‘back up humanity’, using the universe as our ‘cloud’ with your images, pictures, text, tweets, video, and DNA!””
~Voices of Humanity

How would all this be made possible? 3D printing humans back to cloning which we previously discussed last week.

“Our best bet for space exploration could be printing humans, organically, on another planet
Maybe we will colonize other worlds not with astronauts in space suits, but with bacteria”
~Adam Seltzner, Nasa engineer said.

The idea and project isn’t lacking support either it’s backed by Nasa’s Philip Lubin who is also working on the Breakthrough Starshot project with Stephen Hawking. Which also aims to use laser based spaceships.
At the time of this writing the project goal is set at $30,000 and has reached just $4,518 of that given amount with a remaining of 46 days to go.

They aim to send data including – documents, audio, tweets, pictures, and movies. into space offering the chance for anyone to send their twitter handle into space simply by tweeting at @HumanityChip so become a living legend and tweet them and ingrain your twitter in history.

“We sometimes use the phrase, ‘we want to back up humanity,’ which is not a joke — we want to do this.
Personally, I would like to send out a blueprint for life on Earth and how to reconstruct us, how to make us.
Everything required to have a do-it-yourself ‘build humanity’ project.”
~Professor Philip Lubin, NASA, in an interview with space.com.

At least all our mistakes and screw ups will be remembered so the next civilization of humans doesn’t fuck up the next world as much as we have. Maybe we can get it right next time around and profits and greed won’t over take future human minds and we can live as a single collective of human beings? Free from racism and differences and focus on the one thing we all share in common were all flesh and blood humans.

But Have many scientist considered maybe just maybe the Universe is already filled of other human like races that have surpassed our own? What if our DNA came from space? That’s the theory that Kazakhstan scientist are now juggling around and it holds weight. Since 97-98% of our DNA is considered “JUNK DNA” by modern day science which is absolutely absurd.
Maybe we are all aliens and humanity is an experiment from a much more advanced intelligent race of humans already? Which the response to the SETI 1977 WoW Signal may just suggest that.

“Our hypothesis is that a more advanced extraterrestrial civilization was engaged in creating new life and planting it on various planets. Earth is just one of them.
What we see in our DNA is a program consisting of two versions, a giant structured code and a simple or basic code.”
~Maxim A. Makukov, of the Fesenkov Astrophysical Institute. 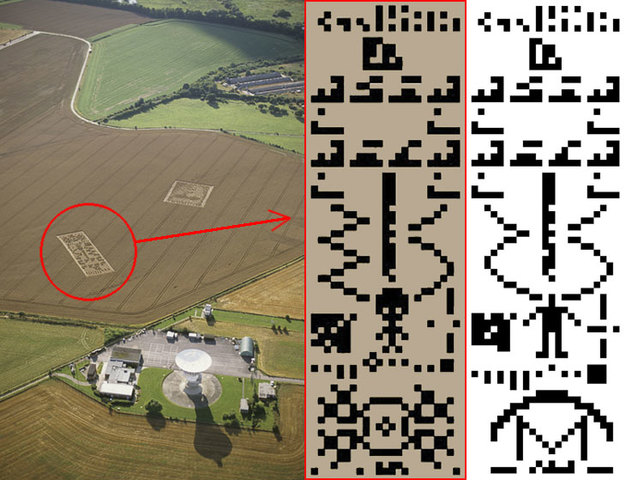 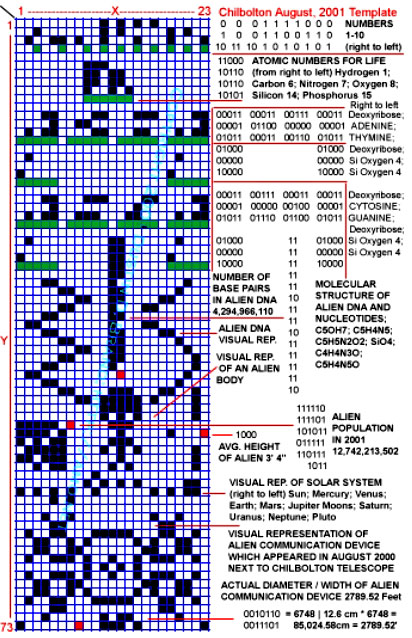 DONATE TO THE CAMPAIGN HERE: