Should the homeless be allowed to sleep in their cars? 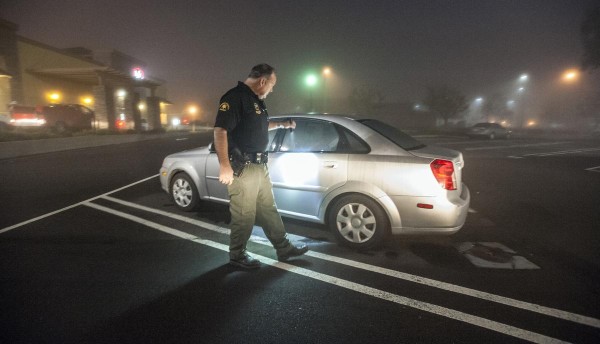 (OCRegister)A bill making its way through the state legislature would legalize something that, on its face, seems uncontroversial: sleeping in your car.

But for homeless advocates and leaders of some beach communities in Orange County, the bill, AB718, is a point of contention that reflects starkly different worldviews.

People who work with the homeless say the bill would provide a small measure of dignity for people struggling to survive on the streets. They view the practice of issuing fines, or rousting people from their cars, as many local agencies now do routinely, as a form of harassment.

But leaders in Laguna Beach and Dana Point, and several other California cities, say a state law would limit local control and jeopardize residents’ safety.

What’s more, they add, the bill does nothing to address the basic reasons why people sleep in their cars in the first place.

For both sides, a day of reckoning might be coming.

The bill passed the Assembly and is scheduled for a vote Wednesday in the state Senate, though its prospects are unclear. A bill that would have created a homeless bill of rights in California was defeated in the Legislature two years ago.

Rep. Kansen Chu, D-Santa Clara, who is pushing AB718, said his goal is simple – to stop the criminalization of extreme poverty.

“Being homeless is not a crime,” Chu said. “It’s a social issue.”

SOME SEE IT AS A GOOD FIRST STEP

Last year, despite an economic recovery, the local homeless population grew slightly, to 15,921, according to homeless count survey results released Thursday by the county.

Other surveys have pegged the number of people who are chronically homeless at about 4,500. On any given night, about half of those people can’t find a bed in a county or private shelter, meaning they’re on the streets.

For those homeless people who still have vehicles, sleeping in a car or in the back of a truck is a better option than sleeping on a bus bench or in bushes or on a public sidewalk.

“An 80-year-old with an 82-year-old wife came in last week living in their Mini Cooper,” said Mary Gray-Perdue, director of the Family Assistance Ministries in San Clemente.

Depending on where they parked for the night, the couple were breaking the law.

Many cities in Orange County have laws on the books against sleeping in cars or trucks, something that’s common in California.

About three out of four cities statewide have a law against sleeping in vehicles, according to a February study by the National Law Center on Homelessness and Poverty. Nationally, according to the survey, only about one in three cities has a similar law.

Megan Hustings, acting executive director for the National Coalition for the Homeless, concedes that legislation that overturns such restrictions, such as AB718, won’t solve homelessness.

But she believes such laws should part of a broader push to eventually improving affordable housing and create jobs that offer a living wage.

“It’s a step in the right direction,” Hustings said.

It isn’t the first time California has considered a state law to legalize sleeping in cars.

In 2013, Assemblyman Tom Ammiano introduced legislation known as the Homeless Bill of Rights. That bill would have guaranteed the homeless a host of rights – legal counsel, access to showers and bathrooms and the right to sleep in a car or outdoors.

The idea didn’t pass. Cities pushed back, saying it would have been too expensive. And some city leaders offered another thought – the state was proposing a law that overrode local views.

City leaders in Orange County are saying the same thing about the narrower proposal, AB718.

“So as long as somebody in Sacramento is going to say, ‘I’d like to do this to your community,’ I’m going to say, ‘No. We’re fine the way we are,’” said Carlos Olvera, mayor of Dana Point.

Many other cities in California also oppose the bill.

Dan Carrigg, legislative director of the League of California Cities, said AB718 could create a situation that would lead cities to enact even stricter parking laws.

“Someone who is living in their car could pull up in front of someone’s house and live there until the city passed an ordinance restricting everyone from parking there,” Carrigg said.

Since the bill doesn’t overturn existing parking restrictions, Carrigg said such new local laws would make parking harder for everyone – homeless or not.

But Capo Beach Church Pastor Jens Christy, who has worked with the homeless for years, said it’s not likely that someone living in his car would camp out for weeks in one spot.

“If a person’s got a car, they’re going somewhere,” Christy said. “They’re not driving in circles.”

From Christy’s experience, most people who are homeless start out with a car but lose it because of the associated costs.

That’s why supporters of a separate bill, SB608, say it’s important that the homeless have the right to rest in any public place.

The bill wouldn’t apply to sleeping in vehicles, but according to the legislation it would “afford persons experiencing homelessness the right to use public space without discrimination based on their housing status.”

The idea hasn’t gotten as far in the Legislature as AB718, but it does have support from many of those who back AB718.

Critics of SB608 say it could make their communities less safe.

But others ask: Less safe for whom?

Some national statistics show that although homeless people are disproportionally perpetrators of some property crimes, they also are more likely to be victims of crimes of violence, from rape to murder.

Eric Tars, senior attorney for the National Coalition on Homelessness and Poverty, said the homeless deserve to be safe, too.

Both sides of the AB718 battle agree on one thing: More needs to be done to help the homeless.

In Dana Point’s letter of opposition to AB718, Olvera argues that instead of passing more legislation on homelessness, Sacramento should encourage cities to focus on “funding for affordable housing and emergency shelters.”

But housing for the homeless long has fallen below demand, Gray-Perdue said.

When the Armory Shelters in Santa Ana and Fullerton close in the summer, she said, the number of emergency beds for the homeless in the county dips to just 25.

She said it’s not enough, and that’s why there are so many people sleeping in their cars.