The Guardian has put out a smear piece on critics of the imperial Syria narrative that reads like propaganda made by seven year-olds without adult supervision.

The article was initially released under the headline “Russia-backed network of Syria conspiracy theorists identified,” which was then hastily edited to “Network of Syria conspiracy theorists identified,” because the article does not even make an attempt to argue that all of the so-called “conspiracy theorists” it smears are backed by the Russian government. It claims only that the Russian government has at times cited and amplified information about Syria which is inconvenient for the US empire, which, you know, duh. Obviously it’s going to do that.

Your first clue that you are reading brazen empire smut is the feature image The Guardian uses for the article: a cinematic shot of a member of the “White Helmets” heroically carrying a child in front of a destroyed building. The photo is credited to Sameer Al-Doumy, whose own website describes him as an anti-Assad activist since childhood. Even if you knew nothing about the Syrian conflict or the White Helmets narrative control operation, if you knew anything at all about propaganda and how it’s used you would still instantly recognize that photo for what it is.

The Guardian is the most egregious purveyor of Syria disinformation and propaganda in the western world. Just look at the image they used for their article; it's transparently propagandistic.https://t.co/fdrFu66W1S

Your next clue that you’re reading a very, very obvious piece of empire propaganda is that the article’s author Mark Townsend makes no attempt to justify his claims. He names a few people he claims are guilty of “disseminating disinformation” like Vanessa Beeley, Eva Bartlett and Aaron Maté, but, rather than presenting arguments and evidence that the claims those individuals have circulated are false, he simply asserts that it is so and moves on.

Your next clue is this line:

“Since 2020, journalist Aaron Maté at the Grayzone is said by the report to have overtaken Beeley as the most prolific spreader of disinformation among the 28 conspiracy theorists identified.”

Anyone who follows Maté’s reporting knows that he is an extremely careful journalist who only makes claims he knows he can back up with hard facts. As far as I know, to this day nobody has even attempted to refute his excellent reporting on the role of the Organisation for the Prohibition of Chemical Weapons (OPCW) in manipulating its own investigation into an alleged chlorine gas attack in Douma, Syria in 2018.

Maté says Townsend made no attempt to contact him before sending this incendiary accusation out into the world, a glaring yet unsurprising breach of standard journalistic ethics.

In The Guardian, @TownsendMark calls me "the most prolific spreader of disinformation" on Syria. His source is a study by the ISD think tank.

Mark has failed to:

-contact me
-offer an example of my alleged "disinformation"
-disclose that ISD is funded by US, UK & allied states pic.twitter.com/qnmN7npYr9

Your next clue that this is a propagandistic smear piece disguised as a news story is Townsend’s sourcing. The article revolves around a report by The Syria Campaign based on information gathered by a think tank called the Institute for Strategic Dialogue. As The Grayzone’s Max Blumenthal documented in 2016, The Syria Campaign is an imperial narrative management operation that is registered as a private company in the UK and has lots of shady connections and funding. The Institute for Strategic Dialogue is funded directly by the US and UK governments and a whole host of other US-aligned nations, as well as the foundations of western oligarchs like Bill Gates, Pierre Omidyar and George Soros.

Townsend’s other sources for his smear piece are “Farouq Habib, White Helmets deputy manager,” and an unnamed “former official at the US Department of State.”

Yeah. Don’t think we need to say much more about that.

The Syria Campaign’s report contains no more evidence or substantiation than Townsend’s mindless regurgitations. It simply redefines the word “disinformation” to mean “information I don’t like,” and then discusses data about people whom it has deemed guilty of spreading that category of information. It defines extensively well-evidenced information like leaked documents from whistleblowers in the OPCW as “disinformation”, and then on that absurd basis convicts journalists like Aaron Maté of “disseminating disinformation” for reporting on it.

The Syria Campaign’s report contains blatantly ridiculous claims, like the nonsensical assertion that people who’ve said the “White Helmets” aren’t what they purport to be have somehow caused its members to be killed: 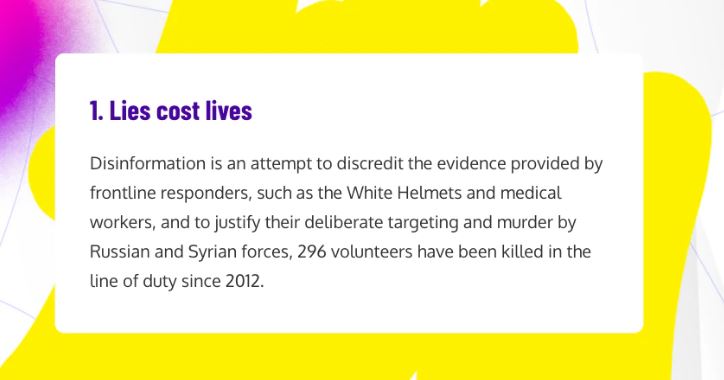 Of all the ham-fisted propaganda I’ve seen The Guardian churn out over the years, this article was definitely one of the worst. Not quite on the level of its notoriously bogus but still-unretracted Assange-Manafort report, but it’s right up near the top.

In 2019 Declassified UK put out a report on how The Guardian lost all semblance of journalistic integrity when it was successfully absorbed into the British national security machine not long after it published the Edward Snowden leaks in 2013. This tracks with comments made by Australian journalist John Pilger that there had been a “purge” of critical anti-imperialist voices around that time.

“My written journalism is no longer welcome in the Guardian which, three years ago, got rid of people like me in pretty much a purge of those who really were saying what the Guardian no longer says any more,” Pilger said in a January 2018 radio interview.

Because of its apparent respectability and ostensible place on the leftish side of the political spectrum, The Guardian plays a crucial role in manipulating public perception in a way that advantages the empire. Whether that’s smearing people who question the imperial line on Syria, smearing Assange, or smearing Jeremy Corbyn, it provides a pathway into the minds of a crucial sector of the population who would respond to such manipulations more critically if they came from conservative publications.