Canadian Prime Minister had a good year, if only because he managed to cling to power during a surprisingly close national election. But having abandoned all concerns about convincing those who don’t already agree with him on issues from COVID vaccinations to feminist ideology, the Canadian PM decided to attack the unvaccinated during an appearance on local TV.

The takeaway from his remarks: in contemporary Canada, anybody who dares question the wisdom of the mass vaccination policy should automatically be dismissed as a racist or a misogynist, even if they’re voicing well-considered criticisms, like Dr. Robert Malone is doing.

Trudeau made the comments to a Quebecois television station, although he was careful to stipulate that the people of Quebec aren’t the problem. Rather, Trudeau questioned whether good vaccinated Canadians should be forced to “tolerate” their unvaccinated brethren.

“We are going to end this pandemic by proceeding with the vaccination,” said Trudeau in French.

“We all know people who are deciding whether or not they are willing to get vaccinated, and we will do our very best to try to convince them. However, there is still a part of the population (that) is fiercely against it.”

“They don’t believe in science/progress and are very often misogynistic and racist. It’s a very small group of people, but that doesn’t shy away from the fact that they take up some space.”

“This leads us, as a leader and as a country, to make a choice: Do we tolerate these people? Over 80% of the population of Quebec have done their duty by getting the shot. They are obviously not the issue in this situation.”

While Trudeau would like Canadians to assume that all anti-vaxxers are racist, the reality couldn’t be further from the truth, because – just like in the US – black Canadians are generally more skeptical of vaccines.

One study from Innovative Research Group showed black Canadians reported vaccination rates that were 20 percentage points below the Canadian average. 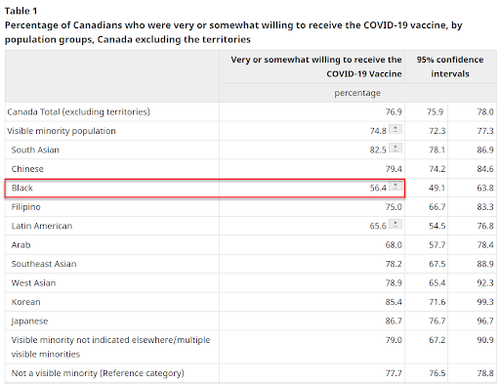 President Biden has made a similar mistake in the past, and some have credited this dichotomy with influencing the White House to finally dial back its hostile rhetoric toward the unvaccinated.

So, in reality, many of the “anti-vaxxers” Trudeau has condemned as racists are actually black themselves.

Then again, racial sensitivity has never been one of the boyish PM’s strong suits. 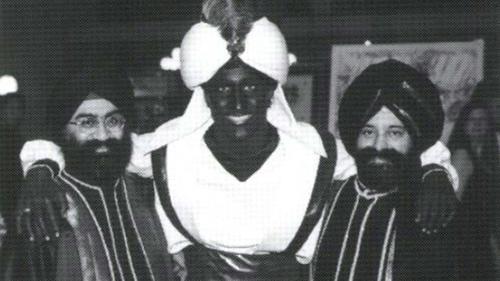 In a sense, Trudeau is conjuring up boogeymen, since vaccination rates across Canada are already extremely high (well beyond the levels once considered the threshold for “herd immunity”, before scientists decided to quietly scrap that concept when they realized the vaccines weren’t as effective as they had hoped).

After all, if these people aren’t to be tolerated, what should be done? Should they be arrested and held in “re-education camps” until they acquiesce and agree to accept the shot?

Watch the clip (in French) here.