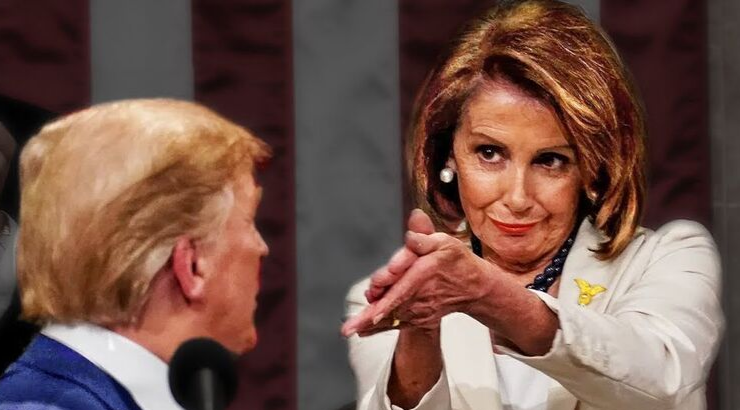 Is president Trump about to be impeached without the House even holding a vote authorizing the very impeachment inquiry to which he is subject? Well no – he won’t be impeached as the Senate will promptly vote the entire political theater down – and that precisely why Pelosi, who until last month was vehemently against starting impeachment proceedings, refuses to hold a vote.

In a letter to Pelosi, House GOP Leader McCarthy today asked 10 questions including, among those: Do you intend to hold a vote of the full House authorizing your impeachment inquiry? Pelosi response: not at all.

Speaking this morning an interview, Pelosi dismissed the impeachment vote as “not required” and added “we haven’t, but we could.” She said they could hold a vote “because it is a Republican talking point.” For now, however, she is dismissing this as a political move – one in response to her own political move, of course – and pressing ahead with the investigation.

Of course, it’s hardly a secret why Pelosi is eager to impeach Trump without actually voting to authorize a formal inquiry: such a move not only insulates vulnerable Democrats running in red districts but shuts down the GOP’s ability to wage a legal offensive of its own.

On paper at least, House Democrats who support Trump’s impeachment have more than enough votes to follow through, with 226 now backing his ouster compared to just 9 holdouts, according to a Politico tally.

So far, however, Pelosi has declined to hold a vote on moving forward with the inquiry, and her aides make a point of saying it’s not required.

On Thursday, Pelosi doubled down, maintaining in a Thursday letter to the House’s Republican Leader, Kevin McCarthy, that there “is no requirement under the Constitution, under House Rules, or House precedent that the whole House vote before proceeding with an impeachment inquiry.”

Pelosi responds to McCarthy's letter from this morning. pic.twitter.com/xhLTK1YlAo

But Republicans are quick to point out that in the only presidential impeachment investigations to have taken place over the last four decades – those against Presidents Bill Clinton and Richard Nixon — the House voted on the inquiry, thus authorizing the Judiciary Committee to investigate.

Why do Republicans want a vote, besides have Democrats – especially those in states won by Trump – be put on the record? Because, as RealClearPolitics explains, holding a formal vote on impeachment would allow Republicans to subpoena documents and witnesses and investigate all the revelations surrounding the whistleblower’s complaint about Trump’s interactions with Ukraine, as well the roles of Joe Biden and his son Hunter in Ukrainian corruption allegations.

“Republicans would have the opportunity to get information from all sources and get it on the table,” Cleta Mitchell, a conservative political law attorney, told RealClearPolitics. “The process they are proceeding under through their committee attorney means they are the only ones who have the rights to gather information.”

Rep. Doug Collins, who serves as the top Republican on the Judiciary Committee, argued Monday that if Pelosi were proceeding in a serious and “somber” manner, as she has claimed, she would bring the impeachment inquiry up for a floor vote.

“Formal impeachment would actually afford due process and ensure both sides are heard,” Collins tweeted Monday.

The Georgia lawmaker, one of Trump’s strongest allies in Congress, accused Pelosi of abusing her power by failing to hold that formal. “It’s not America when you can simply ramrod a hearing without allowing the person who is being accused or the minority to have more rights. … This is just not fair and the American people will see through this,” he predicted during an interview on Fox News.

Which brings us to late on Thursday, when Trump himself figured out that his position would be strengthened by having a formal vote, because according to Axios, the White House is planning to send Nancy Pelosi a letter as soon as Friday arguing that President Trump and his team can ignore lawmakers’ demands until she holds a full House vote formally approving an impeachment inquiry.

In addition to the above considerations, Axios notes that by putting in writing the case that Trump and his supporters have been making verbally for days, “the White House is preparing for a court fight and arguing to the public that its resistance to Congress’ requests is justified.”

Trump wants to force House Democrats in vulnerable races to be on the record if they favor pursuing impeachment, these sources tell us.

Republicans also say the minority party can exert more influence over hearings and other aspects of an inquiry once it is formalized with a vote.

By calling this an inquiry without holding a vote, Pelosi and the Democratic committee chairmen are having it both ways, one official said. “They want to be a little bit pregnant.”

A letter could be filed as soon as Friday, because according to Axios sources, several White House lawyers spent a good chunk of their Thursday reviewing the language in the letter, expecting that it could find its way before a judge.

Republished from ZeroHedge.com with permission.