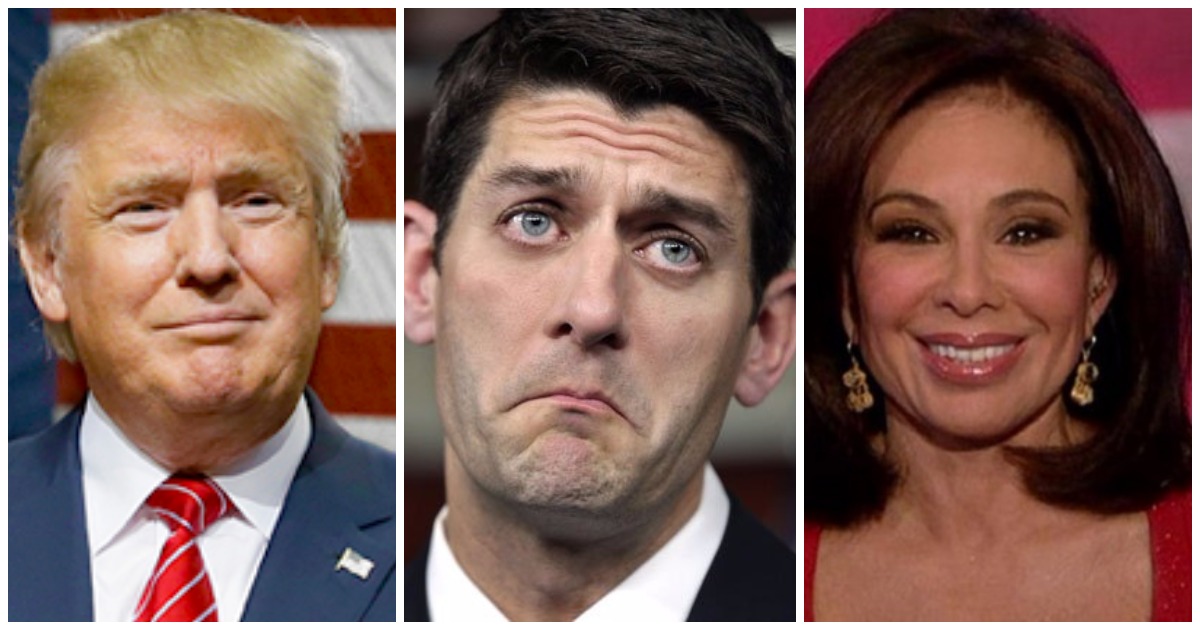 Fox News host Judge Jeanine Pirro, whose show President Trump urged his followers on Twitter to watch earlier in the day, opened her program at 9pm on Saturday by calling for Speaker Paul Ryan’s resignation.

“Ryan needs to step down as Speaker of the House. The reason, he failed to deliver the votes on his healthcare bill, the one trumpeted to repeal and replace ObamaCare, the one that he had 7 years to work on; the one he hid under lock and key in the basement of Congress; the one that had to be pulled to prevent the embarrassment of not having enough votes to pass.” Pirro said in her opening statement.

“Speaker Ryan, you come in with all your swagger and experience and sell them a bill of goods which ends up a complete and total failure and you allow our president, in his first 100 days, to come out of the box like that, based on what?” Pirro said.

What made Pirro’s fiery comments about Ryan especially notable is that they came hours after Trump tweeted to encourage his followers to watch “Justice with Judge Jeanine.”

While Trump has urged people to watch TV shows in the past, typically it was when the president himself was appearing on them. However in a twist, Pirro suggested that she had not coordinated her statement with Trump in advance.

“I have not spoken with the president about any of this,” Pirro said of her call for Ryan to step down on her show, where president’s counter-terrorism adviser Sebastian Gorka also appeared on Saturday evening.

On Friday Trump told Ryan to pull the Republican healthcare bill, upon learning there were not enough votes in support among House Republicans. The move marked Trump’s first legislative defeat as president and followed seven years of rhetoric from Republicans who campaigned on a pledge to repeal and replace former President Barack Obama’s signature healthcare law.

In the initial round of fingerpointing, Trump blamed Democrats for not backing the GOP healthcare bill, warning that Obamacare would “explode” on its own, and signaled that he would move on to other priorities such as tax reform. On Saturday, the NYT reported that the blame among Trump’s closest circles had fallen on Reince Priebus and Health and Human Services Secretary Tom Price, while Ryan was spared Trump’s anger. Trump and White House press secretary Sean Spicer also indicated that they appreciated Ryan’s effort to get the bill passed, amid criticism from some Trump allies over the failed effort.

Following the Pirro statement, the blame now appears to have shifted back to Ryan, as Bloomberg originally reported on Friday.

Pirro insisted in her first segment that the failure was on Ryan and not on Trump. “Folks, I want to be clear. This is not on President Trump,” she said. “No one expected a businessman to completely understand the nuances, the complicated ins and outs of Washington and its legislative process. How would he know on what individuals he could rely?”

“Ryan has hurt you going forward, and he’s got to go,” Pirro said.