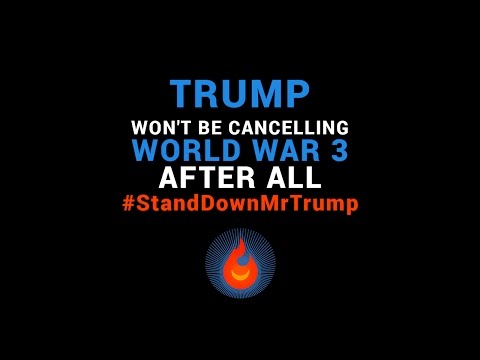 On April 6th, 2017, on the 100 year anniversary of America’s entry into World War I, Donald Trump launched airstrikes against against the Syrian government; in retaliation for a gas attack supposedly perpetrated by Assad. There was no investigation, not even a hack job of a frame up like we had in 2003. The evidence we do have contradicts the official story, and the stakes are much higher this time around.

Then before the dust had even settled, Trump pivoted to Asia. Ratcheting up intimidation tactics, towards North Korea. Threatening regime change and practically begging the already insecure Kim Jong-un to do something stupid. And that’s the point. Provoke a response, and then play the victim.

If he can’t get it the old fashion way he might just make one up. Trump cut a deal with the deep state, and the neoliberal/neocon/corporate alliance. They got his back now. As long as they get their war, everybody’s happy.

Make no mistake this is just the beginning. Expect the unexpected in the South China Sea, Iran, and Eastern Europe and on the home front.

The circus tent is coming down, but boy is he gonna give us a show in the meantime.

Trump isn’t just flirting with World War III, he’s inviting it. He wants everyone to know that he’s crazy enough to pull the trigger; thinks it’ll help him twist some arms, thinks he can force the big boys to negotiate.

But this isn’t isn’t a real estate deal, and that’s not an ace he’s got up his sleeve. Nobody wins a nuclear war.

If just 300 of Russia’s bombs were set off in the United States somewhere between 75 and 100 million people would die in the first half hour. Most of the infrastructure needed to support the population would be instantly destroyed: communication systems, hospitals, transport, power plants, etc… Those not killed by the initial blast would die slowly in the coming months from radiation poisoning, starvation, exposure, and disease.

And this is just the tip of the iceberg.

Even a smaller nuclear conflict involving only 50 to 100 Hiroshima sized bombs would send 5 million tons of debris into the upper atmosphere causing global temperatures to plummet catastrophically, reducing rainfall worldwide for up to a decade, devastating agriculture, and triggering mass starvation on a global scale.

That is not a world you would want to raise children in.

The powers want to tip the game board, rewrite history and start again. They think you’re too stupid, too distracted, too easy to manipulated by emotional platitudes to examine the evidence.

It would be completely illogical for Assad to use chemical weapons at this stage of the conflict . They had nothing to gain from this and everything to lose. The Syrian army had the clear advantage at this stage with conventional means, Russia has their back, and that gave them an extremely strong position going into negotiations which were scheduled for the very next day (April 7th). Assad would have to be a total moron to do something like this (and he’s not).

Then there’s the fact Assad doesn’t actually have such weapons. According to the OPCW, the last of Syria’s chemical weapons were handed over for destruction in 2014. John Kerry confirmed this assessment.

“But Assad used chemical weapons before!”

Really? When? According to the U.N. investigation conducted on the gas attacks of 2013, as reported by the BBC, it was the Rebels that used Sarin, not Assad.

Obama backed down in 2013 because the U.S. backed rebels got caught, and we held them accountable. As a people we activated in 2013 against these airstrikes. We flooded the phone lines as congress approached the vote. We didn’t ask nicely. We made it clear that we knew their names and addresses and that we would hold them personally accountable for the consequences.

Funny thing: they cancelled the vote, Obama backed down, and humanity temporarily stepped away from the abyss.

Trump himself spoke out against the airstrikes in 2013. He demanded a formal declaration of war by congress “unconstitutional if not”. Pointed out just how stupid and destructive such a decision would be…

The only reason President Obama wants to attack Syria is to save face over his very dumb RED LINE statement. Do NOT attack Syria,fix U.S.A.

What will we get for bombing Syria besides more debt and a possible long term conflict? Obama needs Congressional approval.

President Obama's weakness and indecision may have saved us from doing a horrible and very costly (in more ways than money) attack on Syria!

Even a week prior to the airstrikes the Trump administration had announced that Assad could stay… then something flipped.

Assad: Hey I have an idea! Now that we're winning the war…
Let's give the United States the perfect excuse to attack us!#StandDownMrTrump pic.twitter.com/mFapjvxeX5

Mr Trump is a liar, a hypocrite and a fool. He has turned the U.S. military into Al Qaeda’s air force. He’s playing chicken with humanity’s future. He’s rolling dice with the inhabitability of the planet.

And this insanity is bipartisan! The Neoliberal, Neocon, corporate alliance has come out of the closet, in a disgusting show of war mongering solidarity.

These haircuts in suits don’t deserve your obedience. They don’t even deserve your respect. It’s not their power it’s yours.

If enough of you figure that out it’s game over. That’s why they pit you against each other provoking artificial group identities. Divide and conquer makes you easy to control.

The choices we make in the next few milliseconds of human history count. A lot.

Asymmetrical Response When the odds are stacked against us, and failure is not an option we must formulate an asymmetrical response.

We have to think outside the box, find creative ways to break the chain of obedience, and send a message in uncompromising terms: #StandDownMrTrump

This article first appeared on StormCloudsGathering.com and was authored by Aaron Hawkins.