The US Postal Service (USPS) has been running a secret program to track and collect Americans’ social media posts – including those about planned protests, according to a document obtained by Yahoo News. 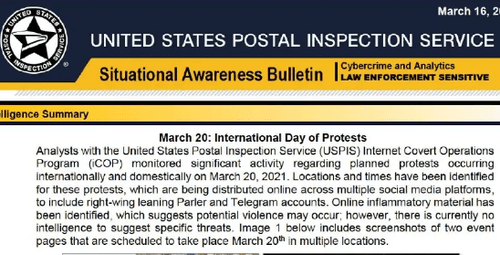 The surveillance program – operated by the law enforcement arm of the USPS, is known as iCOP or “Internet Covert Operations Program” – has not been previously made public according to the report.

The work involves having analysts trawl through social media sites to look for what the document describes as “inflammatory” postings and then sharing that information across government agencies. –Yahoo News

“Locations and times have been identified for these protests, which are being distributed online across multiple social media platforms, to include right-wing leaning Parler and Telegram accounts.”

The report cites intelligence that ‘a number of groups were expected to gather in cities around the globe on March 20 as part of a World Wide Rally for Freedom and Democracy’ against pandemic lockdown measures.

“Parler users have commented about their intent to use the rallies to engage in violence. Image 3 on the right is a screenshot from Parler indicating two users discussing the event as an opportunity to engage in a ‘fight’ and to ‘do serious damage,’” reads the bulletin,” though it hedges with “No intelligence is available to suggest the legitimacy of these threats.”

The bulletin includes screenshots of posts concerning the protests from Facebook, Parler, Telegram and other social media sites (only one of which – Parler – was ‘canceled’ by big tech).

“iCOP analysts are currently monitoring these social media channels for any potential threats stemming from the scheduled protests and will disseminate intelligence updates as needed,” reads the bulletin.

“It’s a mystery” said University of Chicago law professor Geoffrey Stone – who was appointed by President Obama to review the National Security Agency’s bulk data collection program revealed by Edward Snowden. “I don’t understand why the government would go to the Postal Service for examining the internet for security issues.”

The Postal Service has had a turbulent year, facing financial insolvency and allegations that its head, Postmaster General Louis DeJoy, who was appointed by President Donald Trump, was slowing down deliveries just as the pandemic vastly increased the number of mail-in ballots for the 2020 election. Why the post office would now move into social media surveillance, which would appear to have little to do with mail deliveries, is unclear.

“This seems a little bizarre,” agreed Rachel Levinson-Waldman, deputy director of the Brennan Center for Justice’s liberty and national security program. “Based on the very minimal information that’s available online, it appears that [iCOP] is meant to root out misuse of the postal system by online actors, which doesn’t seem to encompass what’s going on here. It’s not at all clear why their mandate would include monitoring of social media that’s unrelated to use of the postal system.” –Yahoo News

“If the individuals they’re monitoring are carrying out or planning criminal activity, that should be the purview of the FBI,” said Levinson-Waldman. “If they’re simply engaging in lawfully protected speech, even if it’s odious or objectionable, then monitoring them on that basis raises serious constitutional concerns.”

Read the rest of the report here.