Four months ago, Revolver News‘ Darren Beattie reported that the FBI was possibly involved in organizing the Jan. 6 Capitol riot.

Their evidence? A glaring omission in charging documents related to the event – that of several ‘unindicted co-conspirators’ which could point to either FBI operatives, or ‘protected’ agitators working with the agency.

BREAKING: @DarrenJBeattie of Revolver News breaks down the involvement of FBI operatives who organized and participated in the January 6th Capitol riot. pic.twitter.com/t1UOnT5zgc

More recently, a September “Justice for J6” rally appeared to have been infiltrated by a group of similarly built and attired gentlemen who were absolutely glowing.

Pockets bulging with nothing in them

Suspiciously watching someone record them in a group

This is a piece of art https://t.co/PqRLuHlKHK

Meanwhile, over the past two weeks, several videos have emerged of Trump supporters casually strolling into the Capitol – and in one case, appeared to be waved inside by a Capitol Police officer.

Is this officer waving the people inside? pic.twitter.com/20MX0uR0fC

And while there doesn’t appear to be any direct public evidence that a federal agency was involved in the J6 ‘insurrection’ – a shocking video posted by Rep. Thomas Massie (R-KY) has people wondering exactly who this man is telling Trump supporters to ‘go into the Capitol’ before the January 6 protest. 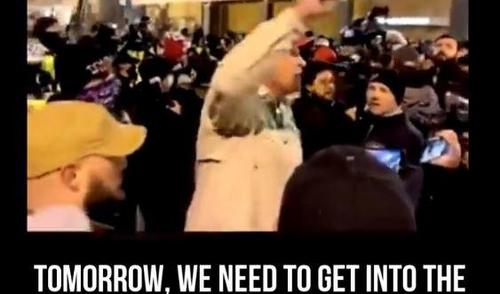 “I’ll say it,” says the unidentified man, “We need to go in to the capitol,” to which one man starts a “FED!” chant. The same man can be seen approaching other groups of Trump supporters with the same suggestion.

According to Massie, he presented the video to Attorney General Merrick Garland, who refused to acknowledge “how many agents or assets of the federal government were present in the crowd on Jan 5th and 6th and how many entered the Capitol.”

I just played this video for AG Merrick Garland. He refused to comment on how many agents or assets of the federal government were present in the crowd on Jan 5th and 6th and how many entered the Capitol. pic.twitter.com/lvd9n4mMHK

This man has not been charged https://t.co/xI9rsj2TVm