“We’ve Been Locked Up for Almost 50 Days”: 1000s Rally Against Lockdown as Public Opposition Grows in New Zealand

As Australia finally begins to scale back some of its least-popular lockdown rules in the face of growth opposition by the public and the business community, anti-lockdown demonstrations in New Zealand are ramping up once again.

A large group of demonstrators gathered at a large park in Auckland on Saturday to protest ongoing COVID lockdown measures in the tiny Antipodean nation of roughly 5MM, many arriving with a procession of motorbikes lead by a local church leader. 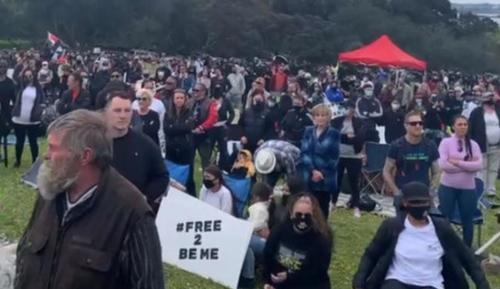 The demonstrators, said to number between 1K and 2K, according to local media reports, descended on the Auckland Domain on Saturday to demand an end to the lockdowns.

A caravan of motorcycles led by Brian Tamaki, a vocal anti-lockdown activist who heads the Auckland-based Pentecostal Destiny Church, was among the first on scene at the protests on Saturday, and he captured videos as the procession made its way to the park.

Tamaki and the rest of the crowd remained peaceful during the demonstration, with Tamaki delivering a fiery, 40-minute speech denouncing the draconian shutdown orders, which have remained in effect in Auckland for nearly two months.

Thousands have gathered in front of Auckland War Memorial to protest against lockdowns and mandated vaccinations. @newshub pic.twitter.com/r8Ef4gopw3

In his speech, Tamaki compared the lockdown in Auckland, which is nearing its 50-day milestone, to being on “house arrest”, while lamenting the dynamic of not being able to trust one’s own neighbors not to snitch on them.

“Now Auckland’s coming up to 50 days – 50 days we’ve been on home detention. That’s the same thing they give to prisoners who’ve done a crime; it’s an alternative to going to jail,” he said. “I’ve been locked up for over 50 days in my house, and I haven’t done a crime. I’ve done nothing wrong, and I’ve been punished. We are penalized.”

“I can’t go outside because the neighbor might tell on me. I can’t drive down the road to get some milk and bread because the policeman might pull me over.”

The police presence at Saturday’s demonstration was somewhat subdued, with no arrests or clashes reported. Still, National Party MP Simeon Brown, the party’s police spokesman, denounced the protest, while also taking a shot at law enforcement.

“The rules are clear. The police have rightly warned protesters in Auckland today – yet we see a blind eye turned to gangs breaking lockdown rules. Aucklanders want out of this lockdown – and it means rules being applied consistency [sic],” he said in a tweet, presumably referring to the biker procession as a ‘gang’.

Whether it’s a gang funeral or a protest – the rules are clear. The Police have rightly warned protestors in Auckland today – yet we see a blind eye turned to gangs breaking lockdown rules. Aucklanders want out of this lockdown – and it means rules being applied consistency.

Earlier this week, Brown denounced “gang members” – including bikers – after they gathered for a funeral, which was promptly dispersed by police in West Auckland. He said the funeral was “demoralizing for the more than 1.7MM Aucklanders” who have followed the rules and done what they have been told to do.

“This is just not good enough. The government needs to make clear that the rules apply to gang members and if they break them they will be treated just like everyone else,” he went on, calling for a harsher police response.

Aucklanders are fed up with gangs flouting the rules. pic.twitter.com/0tqPhUo9Ds

Prime Minister Jacinda Ardern declared a “short and sharp” national lockdown in mid-August after a single COVID case was detected in Auckland, the country’s largest metropolis. The measures have dragged on in Auckland, even as much of New Zealand has returned to normal. While the Australians next door are starting to move on from the “ZERO COVID” approach, New Zealand is still insisting on what scientists have described as an impossible standard. That should be a concern for all Aucklanders, since all this sacrifice ultimately likely won’t make much of a difference.