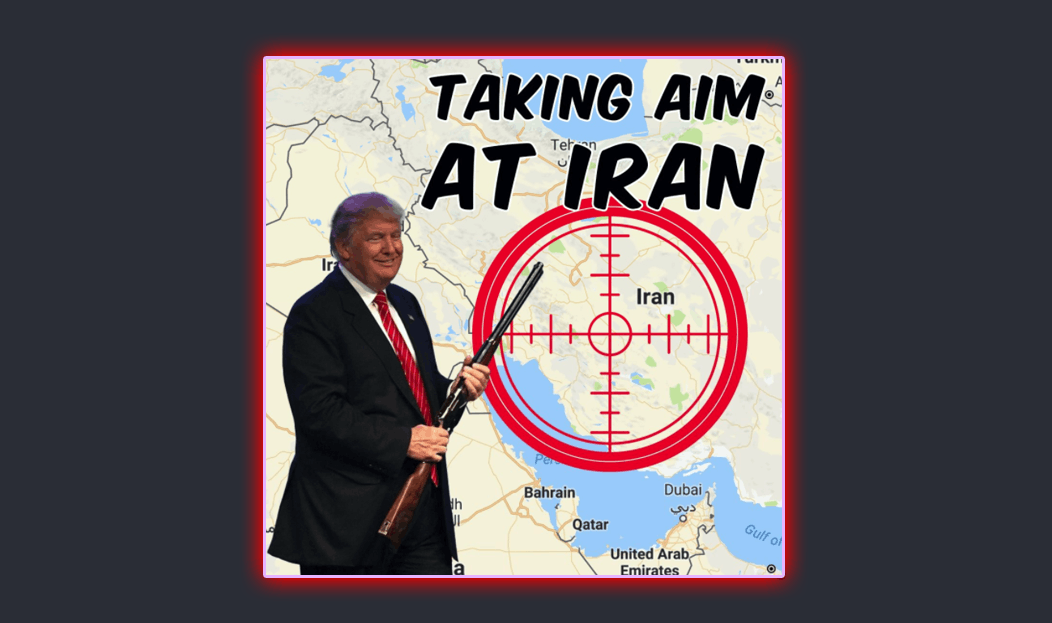 Welcome back beautiful, amazing human beings to the WeAreChange Sunday recap called What The Hell Really Happened. This is where we go over all the important news that happened this week.

You can watch this video on DTube and YouTube.

I think the most important story this week is how the US government broke a deal with Iran while making a deal with ISIS. Stay with me as I explain what happened. This week US President Donald Trump took to the world stage and decertified the Iran nuclear deal. 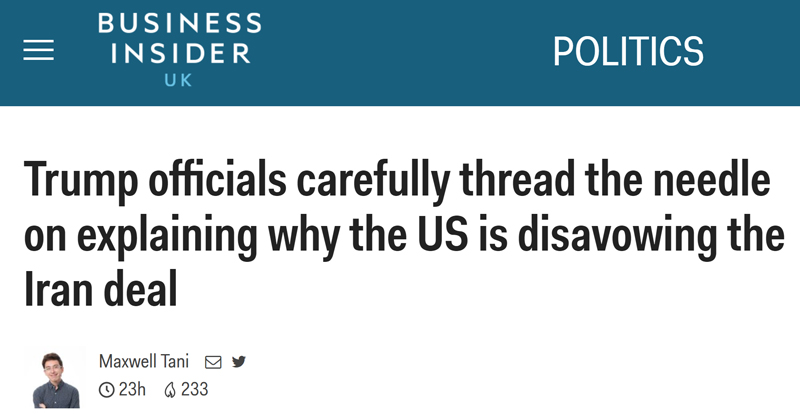 If you don’t know what the Iran nuclear deal was, it was the deal struck by Barack Obama and the Iranian government that significantly reduced their nuclear weapons capabilities. This was done in exchange for ending economic sanctions on the country that the United States imposed on them.

According to many independent government bodies and investigators, Iran was compliant with this deal and was following the rules. Donald Trump still went on the world stage and said no and decertified the entire agreement. His reasoning for this is that Iran is destabilizing the Middle East, financing terrorists, and says something to the likes of making weapons of mass destruction. Which I think most Americans now understand is a codeword for we’re just going to lie to you.

So now Congress has to decide if the U.S. will remain in the deal or not. Donald Trump also levied new sanctions on Iran which Iran responded by saying if you put more sanctions on us your regional military bases that surround our country would be at risk. If you’ve been studying American foreign policy, you understand that a war with Iran is a wet dream for the neoconservatives in this country. It’s been planned and talked about for decades. Political hacks on the Democrat side and Republican side have been pushing for it.

While all of this news is happening a former George W. Bush official has come out warning that Trumps latest action is itching for war. He said, “If you think Iraq was a bad war wait until you see Iran.” He said, “I think we are doing the same thing as we did in 2003, and I was very intimate with the process in Iraq. We are marching down the road to war.”

Germany’s foreign minister even came out and warned that Donald Trump’s moves on Iran are increasing that risk of war. He said, “by doing that he’s assured that the new agreement will fail ultimately, and then what you have is one choice: war. The end game is to provoke Iran enough so we can go to war.” I have to say from my analysis the chances of war are becoming more likely. We have to ask ourselves who does this conflict benefit. I think Julian Assange of WikiLeaks put it best saying that “Israel has colonized Trump’s foreign policy even more than Obama’s. It’s not America First. It’s not even Israel First. It’s Likud First, Saudi Second.” It’s Israel’s right-wing political party first and Saudi Arabia second. 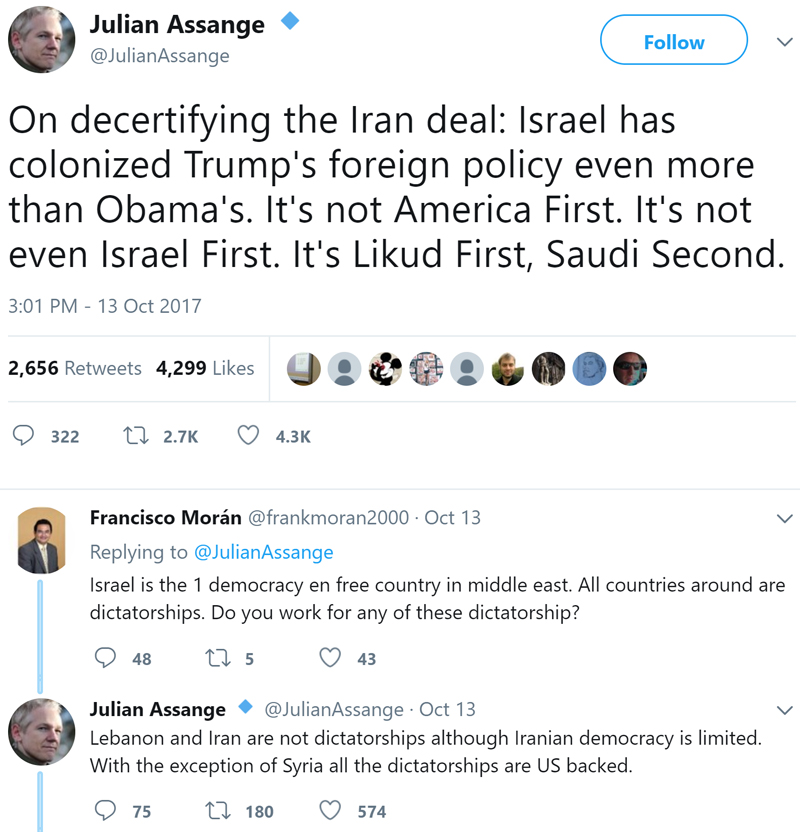 We have to call a spade a spade here because this aggression towards Iran works foremost for the benefit of Israel. Israel now feels threatened due to a significant Iranian presence inside of Syria right on Israel’s border. Then there is Saudi Arabia whose chief oil exporting competitor is Iran and with whom they have religious conflicts. These two nations currently have a proxy war going on in Yemen. Saudi Arabia benefits from a more aggressive U.S. policy towards Iran. However, you’ll never hear that in the US mainstream media. Since the Iran nuclear deal is looking like it will expire who did the United States cut a deal with this week? The Washington Post unfairly reported that “A deal was reached to evacuate civilians, local militants from ISIS-held Raqqa.” I hope you’re able to see what the Washington Post has just done. 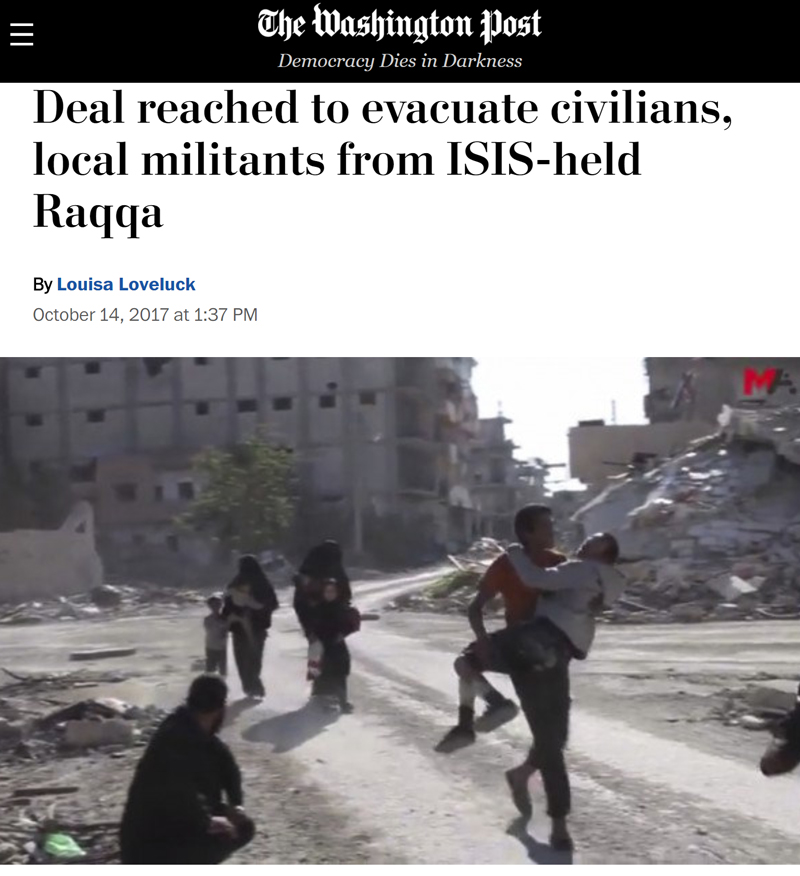 Many people viewed Raqqa as the capital of ISIS. It’s pretty clear ISIS previously controlled the entire area. When you’re talking about “militants,” you’re talking about ISIS. Terrorists that the United States have just struck a deal with and other people to verify the validity of that claim. Even the AFP wrote that ISIS fighters are leaving Raqqa but failed to mention that it’s due to this U.S. brokered arrangement. The United States will bus ISIS fighters from Raqqa to DeirEzzor where the Syrian government along with Iranian and Russian forces are currently fighting ISIS. These are essential facts that the US mainstream media and intelligence agencies do not want you to know. In light of all of this, Iran responded to the United States by stating “stop worrying about us when your government is about to collapse.” 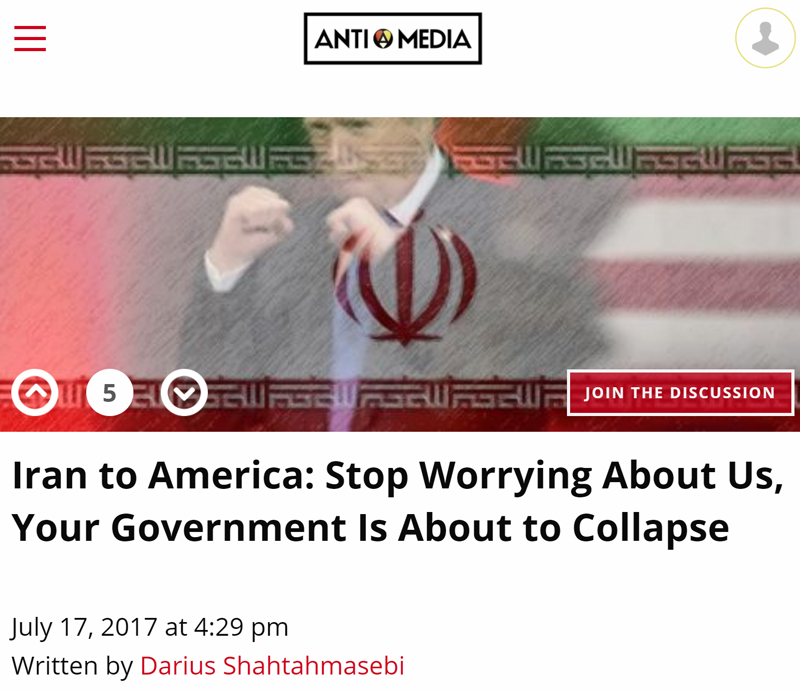 Economically the United States doesn’t look like it’s in a favorable position after these latest moves. We’ve seen China, France, Germany, Russia and even the United Kingdom plea with Donald Trump to sustain the Iran nuclear deal.

In response to Donald Trump’s decertification of the Iranian deal Russian and China have aggressively launched a Yuan-Ruble payment system. This, of course, will have negative side effects on the U.S. petrodollar. China is even trying to compel Saudi Arabia to trade oil in Yuan instead of the US dollar. This is a very aggressive move which threatens the U.S. dollar as the world reserve currency.

China is economic partners with Iran, and they’re very displeased by Donald Trump’s latest moves. Trump’s actions only escalate the economic warfare between China and the United States leading many experts to predict the death of the U.S. petrodollar. This would end the U.S. dollar world reserve currency hegemony which would result in economic chaos within the United States. 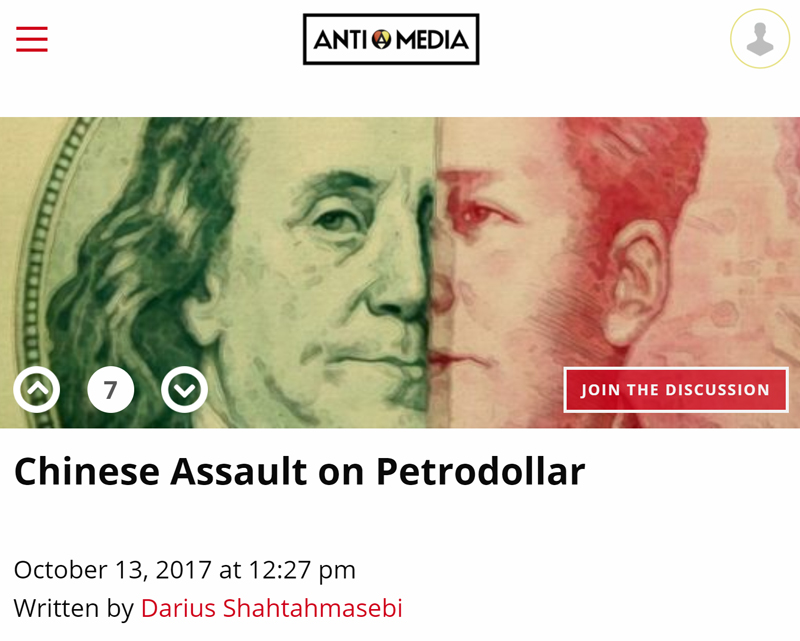 If that wasn’t enough former presidential candidate and congressman Ron Paul just stated: “The Federal Reserves massive bubble is creating a world of economic pain domestically.” The U.S. creates new money and credit out of thin air and what else could you expect from a country that is over 20 trillion dollars in debt? One that keeps pursuing a failing war on terror. A war that is creating more terrorism, creating more pain, and havoc around the world. A country that continuously is trying to start new fights and new conflicts.

In other lying authority figure news, we have the Las Vegas police department and FBI who are changing the timeline of the shooting for the third time. They just offered up an entirely new timeline once again contradicting themselves. 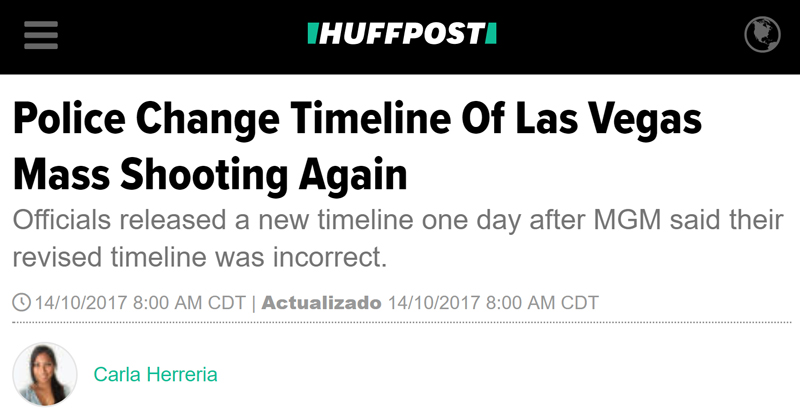 It sure looks like they have something to hide. They are seemingly unable to keep their stories straight of what exactly happened during the Las Vegas shooting which is another example of why people no longer trust authorities.

The situation gets more confusing as one of the key witnesses that contradicted the authorities timeline, Jesus Campos; the security guard has disappeared just as he was about to do five interviews. One interview was supposed to be on the Sean Hannity show on Fox News. His union president said that they lost all contact with him. His current whereabouts are unknown. We’re getting more disinformation from the US mainstream media about these events as they claim that the Las Vegas shooter was a successful gambler. They claim he has earned over five million dollars in winnings. Independent media has proved them wrong and estimated that he lost hundreds of thousands of dollars during his gambling sprees. All we can say from this contradictory, confusing mess of a situation is that we’ll try to keep you updated. 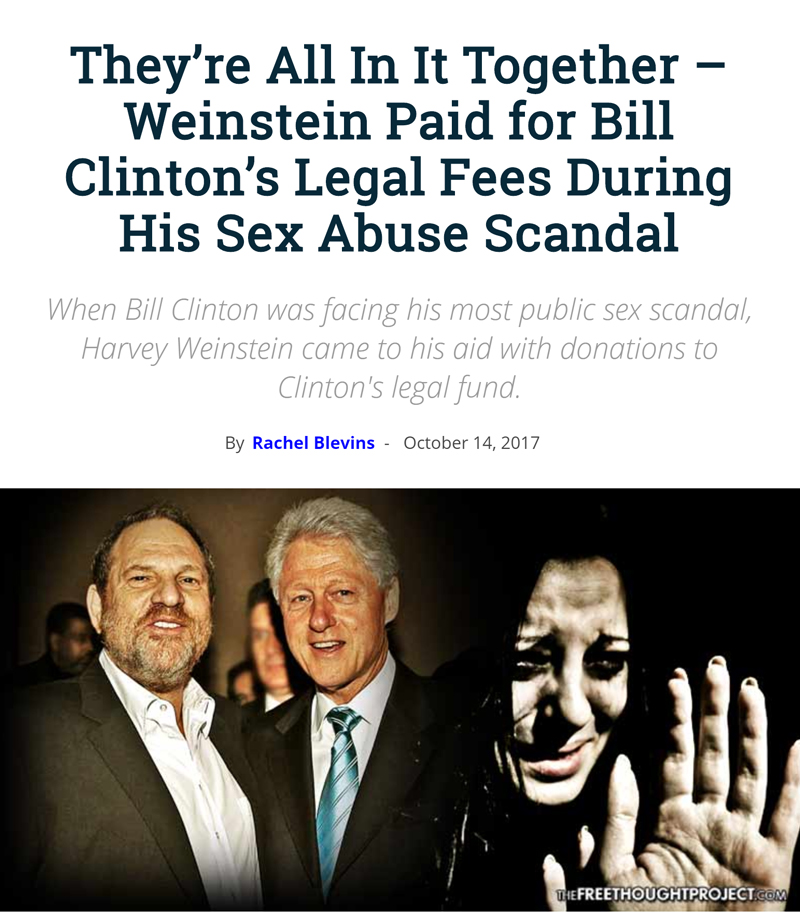 Finally, as more celebrities speak out the metaphorical dam is breaking on Hollywood’s horrible criminal behavior. People like Kaya Jones a former member of the Pussycat Dolls came out and said that “My truth. I wasn’t in a girl group. I was in a prostitution ring. Oh and we happened to sing and be famous. While everyone who owned us made money.” Actress Rosie McGowan has recently stated that “She told Jeff Bezos head studio director that Harvey Weinstein raped her. Over and over I said it. He said it hadn’t been proven I said I was the proof.” This was right after this actress was locked out of her Twitter account for some reason.

The cover-up is indicative of a larger problem that’s happening here. Celebrities, politicians, media organizations, and even local police departments are covering up these heinous acts. Former famous child actor Corey Feldman came out on The View and said that “were the people that did this to both me and Corey that are still working, they’re still out there, and they are some of the richest most powerful people in this business…. it’s a many feathered bird okay be careful what you wish for that’s what I’ll tell you. Don’t go into it with naivety don’t go into it thinking that it’s all roses.” To which one of the women on The View accused him of “damaging an entire industry.”

This is sick; this industry is clearly filled with sex abusers and pedophiles that are being covered up from the general public. All the while lying to you about their illegal depraved horrible behavior. Look into the minds of these sick human beings like Woody Allen who says “that he hopes this whole Harvey Weinstein scandal doesn’t spark a witch hunt.” 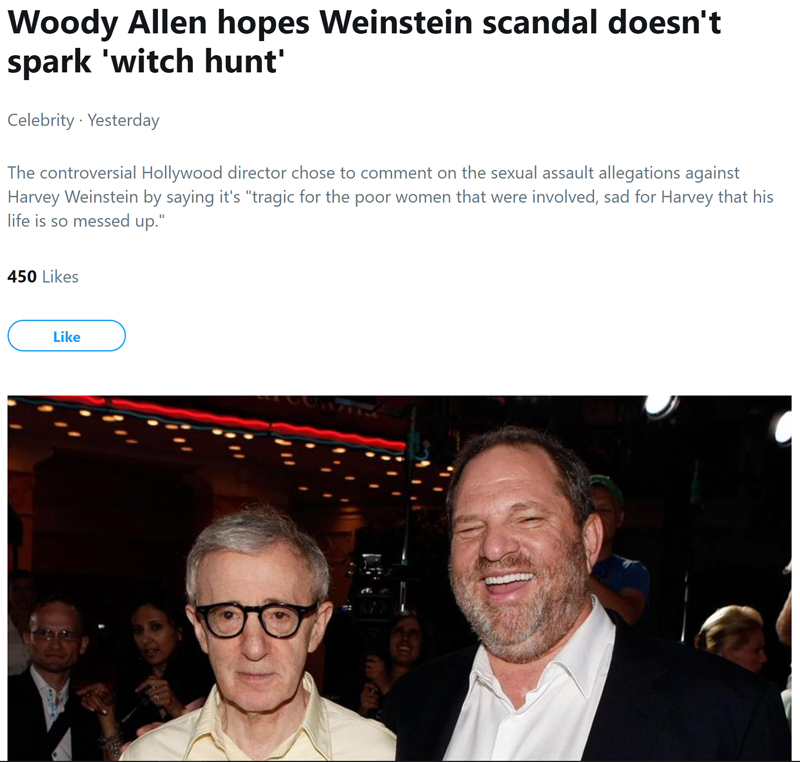 Woody Allen spoke out to defend Harvey Weinstein saying that he feels bad for him. This is a man who has been accused of sexual abuse himself. His own adopted daughter detailed sexual abuse that he committed against her, she claims she was sexually abused at the age of seven by him.

We do need a frickin witch hunt against these predator-sex-abuser-pedophiles. An investigation into these powerful freaks that are being protected by news organizations, local police departments, celebrities, and other politicians.

The scary fact behind all of this is that influential people were protecting Harvey Weinstein for over 30 years. It’s clear that there’s more protected untouched individuals in Hollywood who did and are doing worse things than Harvey Weinstein. It’s pretty clear that the upper echelons of Hollywood are sick individuals and they need to be cleaned with a good dose of truth, reality, and justice for their crimes.

If you agree, please share this video. I’m pretty much at a loss for words at this point so let me know what you think in the comments section where we can continue this conversation.

I want to thank everyone from the bottom of my heart for keeping this independent media operation live by going to WeAreChange.org/donate. Thank you for keeping us entirely independent and free through PayPal, regular mail, cryptocurrencies and most importantly your generosity. If it weren’t for you guys, I wouldn’t be here. That’s why I love you guys thank you again.